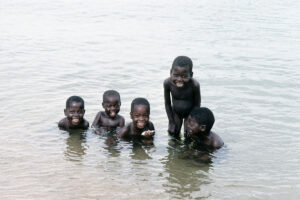 Happy Achewa children, bathing in Lake Malawi. (Photo copyright © by Kaj Halberg)
“Let go aft!” shouts the captain, a big, black man in a snow-white uniform. The stern-fast goes, then the bow-fast. Slowly, the M/V Ilala drifts out of Monkey Bay, a small natural harbour, surrounded by huge, round rocks, in the south-western corner of Lake Malawi, southern Africa. 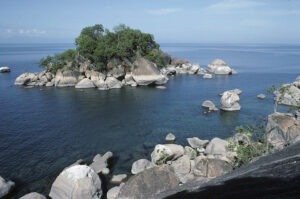 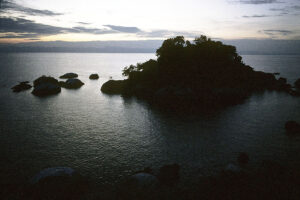 Rocky islet at Otter Point, near Cape Maclear, on the south-western shore of Lake Malawi, in daylight and late in the evening. (Photos copyright © by Kaj Halberg)
A huge lake
Lake Malawi is the third-largest lake in Africa, 575 km long and up to 85 km wide, covering an area of c. 23,000 km2. The deepest point is 704 m below the lake surface. Fourteen rivers enter the lake, but only one, the Shire River, drains it, in the southern end. Lake Malawi is widely known for its incredible number of fish species, of which more than 350 (mainly cichlids) are endemic.

The first European to see this lake was the Scottish missionary and explorer David Livingstone, in 1859. He named it Lake Nyasa.

A Christian mission was established near Cape Maclear, in the south-western corner of the lake, as early as 1875, but it was abandoned a few years later, as the missionaries died of malaria. Another mission, called Livingstonia, was established in the high, malaria-free mountains northwest of the lake. The work of the missionaries was very efficient indeed, and today almost the entire population of Malawi are Christians. 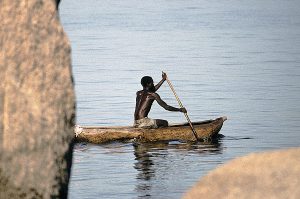 Fisherman in his canoe, near Cape Maclear. (Photo copyright © by Kaj Halberg) 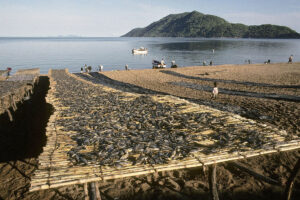 Illuminated by the evening sun, fish and fish nets are spread out to dry, Chembe, near Cape Maclear. (Photo copyright © by Kaj Halberg) 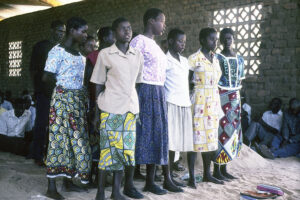 Almost all Malawians are Christians. This picture shows Achewa girls, singing during a service in a Presbyterian church, Chembe. (Photo copyright © by Kaj Halberg)
On board the M/V Ilala
The M/V Ilala is one of two ferries, cruising Lake Malawi. Leaving Monkey Bay every Friday morning, it calls on numerous small towns and villages along almost the entire length of the lake. Last call is at Chilumba, on Sunday evening. Monday morning, the ship is south-bound, reaching Monkey Bay on Thursday morning. This schedule is employed throughout the year.

Ilala’s sister-ship, the M/V Mtendere, takes over, when Ilala has to be overhauled, and vice versa. If both ships are navigable, there are two weekly departures, one going all the way up to Tanzania in the northern end of the lake.

On board the Ilala are seven First-Class cabins on the upper deck (of which only one has attached bathroom). The rest of the First-Class passengers must spend the night in the open. Most passengers travel on Second Class, on the lower deck, which is rather crowded. The ferry can carry a total of 500 passengers.

Shortly after our departure, the ship comes to a stop. A passenger (presumably a VIP) has missed the ferry, and one of the Ilala’s small motor boats, attached to the side of the ferry, is sent ashore. When it returns, the ship glides out between the rocks, bound for the village of Chilinda, on the eastern lake shore. 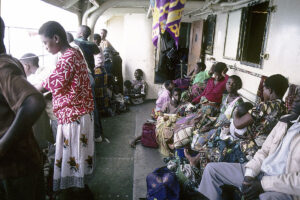 On board the M/V Ilala, the lower, Second Class deck is rather crowded. (Photo copyright © by Kaj Halberg) 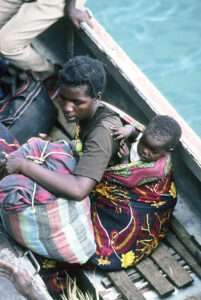 Passengers on board the ferry. (Photos copyright © by Kaj Halberg)
First call
The coast on the eastern shore is low, and we are quite close to it, before we are able to distinguish fishermen’s huts and great baobab trees (Adansonia digitata) from the surrounding landscape. This remarkable tree is described on the page Plants: Ancient and huge trees.

The Ilala anchors some distance from the shore, whereupon its two motor boats are lowered into the water. Passengers jump into the boats, bringing all sorts of luggage, including suitcases, boxes, huge bunches of unripe bananas, flower-pots, and cages containing chickens or ducks, tied together by the legs, two or more in a bundle.

The boats depart in a dense cloud of diesel smoke, only to return a little later with new passengers. Several trips must be made, before all passengers, bound for this village, have been brought ashore. Some passengers are picked up by small canoes.

Other canoes approach the ship, loaded with mangoes, and a furious haggling over the price begins. When the two parties have come to an agreement, the fruits are handed up, and coins are tossed into the canoe. 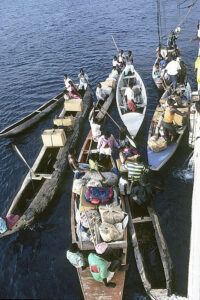 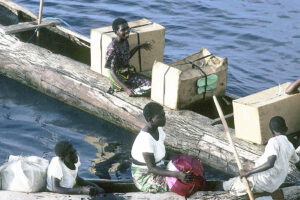 This boy has paddled his canoe, laden with a few mango fruits, out to our ship, and now a furious haggling over the price will begin. (Photo copyright © by Kaj Halberg)
Tropical storm
After having called at another fishing village, Makanjira, near the border to Moçambique, the ship heads towards the town of Chipoka, on the western lake shore.

At dusk, gigantic black clouds, with lightning and thunder, pass over Cape Maclear. The storm approaches the ferry which, in this type of weather, is not able to go alongside the quay in Chipoka, but is forced to anchor offshore.

Heavy rain is pouring, and enormous gusts of wind cause the ship to roll. Without pause, the sky is illuminated by lightning. In this inferno, the crew is trying to get people into one of the motor boats, which is thrown back and forth by the waves, hitting the side of the ship with a tremendous crash. The crew members try to hold the boat close to the ship, while people, drenched to the skin, jump into it, risking being crushed between the ship and the boat. People shout and scream, babies cry on their mother’s back, and luggage is thrown helter-skelter into the boat, where people tumble about, trying to get foothold. Amazingly, nobody is hurt.

The boat is only half loaded before taking off towards the shore to await more suitable weather conditions. And soon the rain diminishes, the gusts of wind are less fierce, and the lightning ceases. The passengers on the upper deck are drenched to the skin, and they face a very uncomfortable night. I am happy that I was able to seek shelter in my tiny cabin during the worst part of the storm.

In the dark night, the ship heads north. At dawn, the weather is pleasant, although the waves are still quite high. We approach the village of Nkhotakota, named after the numerous sand bars found in this part of the lake. Drumbeats announce that breakfast is served on First Class. The rolling ship causes a single passenger to lose his appetite, and he must leave the table before getting his fill. 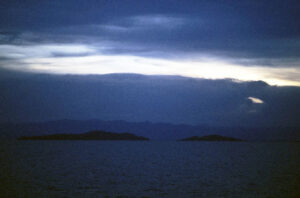 Rain storm over Chipoka. (Photo copyright © by Kaj Halberg)
An oversized cathedral
We are now heading for two tiny, rocky islands, Likoma and Chizumulu. Despite being situated near Moçambique, they were ceded to Malawi during the Berlin Act of 1885, which drew boundaries according to the influence of the various colonial powers. As the two islands harboured an important Anglican mission, it was decided that they should be a part of British Nyasaland – today Malawi.

The present population of these tiny islands numbers about 5,000 souls, and they bear the stamp of a long period of overuse. Apart from a few fat baobabs, there is hardly a wild tree left on the islands. They have all been cut down to supply timber or firewood, or wood for smoking fish. Recently, a number of eucalyptus trees have been planted to supply firewood, but not nearly enough to meet people’s need.

The pride of Likoma is its great cathedral, an imposing building, which was inspired by the cathedral in Salisbury, England, and almost as large. Construction began in the late 1800s and was completed in 1911. It is beautifully crafted in stone and has fine stained-glass windows, depicting the twelve apostles and other subjects. I find the new roof ugly.

A great building like this seems rather out of place on this tiny island, perhaps fulfilling the ambitions of a bishop rather than the need of the inhabitants.

The cemetery is unique. Because of the rocky surface of the island, most graves are above ground, covered by numerous small rocks, sometimes with a stone or iron cross squeezed between the stones.

White-breasted cormorants (Phalacrocorax carbo ssp. lucidus) rest on rocks around the island, but out on the lake proper, birds are surprisingly scarce. I only observe a few grey-headed gulls (Chroicocephalus cirrocephalus) and white-winged terns (Chlidonias leucopterus). Nile crocodiles (Crocodylus niloticus) should occur around the islands, but I fail to observe any. 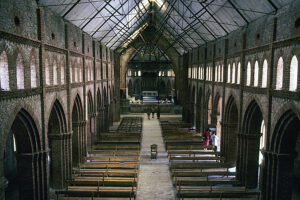 The interior of the large cathedral on Likoma Island. (Photo copyright © by Kaj Halberg) 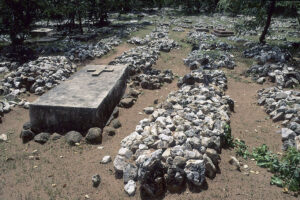 Because of the rocky surface on Likoma, most graves are above ground, covered by stones. (Photo copyright © by Kaj Halberg)
Changing landscape further north
At dusk, the ship heads north in the dwindling light, bound for Nkhata Bay. This is the only larger town on our journey, and we are anchored here for most of the night. When another tropical storm passes over, I am awoken by a tremendous crashing sound. A large tree near the harbour has been hit by lightning.

When I get up at 5 a.m., it is still raining. We are now anchored some distance from the village of Mangwina, which is surrounded by forest-clad mountains, partly hidden behind clouds.

Whereas the landscape around the eastern and southern lake shores mainly consists of low, rolling hills, steep mountains rise several hundred metres along the north-western shore, between Nkhata Bay and Mlowe. These mountains are densely inhabited, and most villages are situated along the numerous small streams, which make their way down to the lake.

Only the most inaccessible parts of the mountains are still forest-clad. Elsewhere, the forest has been cleared for timber and firewood, and fields now stretch most of the way up the slopes. A depressing sight, but only too common throughout the Tropics.

This area is almost devoid of roads. Narrow and winding, one road leads from Mzuzu across the mountains, then steeply down the slope, through a number of hairpin bends, ending abruptly at the village of Usisya. Most villagers here connect with the outside world via one of the ferries, or in small canoes. If you don’t own a canoe, you must hike up steep trails to reach the road, where you can continue your journey by bus.

A beautiful red-and-white fish-eagle (Haliaeetus vocifer) is soaring over the lake, near the shore. It suddenly plunges into the water, emerging with a fish in its talons, while its mate, sitting in a nearby tree, emits a penetrating call.

North of Mlowe, the mountains retreat inland, and sand bars stretch far into the lake. In the afternoon, we reach the harbour in Chilumba. My three-day trip on Lake Malawi has come to an end. 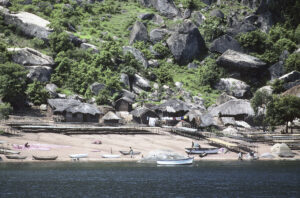 Village on the western shore of Lake Malawi. (Photo copyright © by Kaj Halberg) 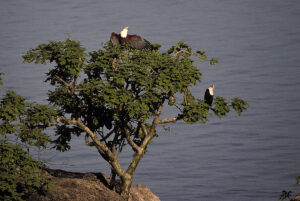