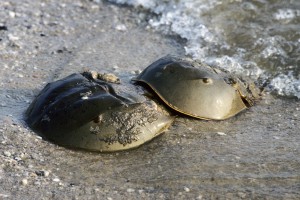 Formerly there were many species of horseshoe crabs, but only four have survived until today. Three of these are distributed along the shores of Southeast Asia, namely Tachypleus gigas and T. tridentatus, and the mangrove horseshoe crab (Carcinoscorpius rotundicauda). The fourth species, the Atlantic horseshoe crab (Limulus polyphemus), is found along the American Atlantic Coast, from extreme south-eastern Canada south to the Yucatan Peninsula in Mexico, being most numerous between New Jersey and Virginia. Its total population has been estimated at between 2 and 4 million. The numbers of the three Asian species are unknown. 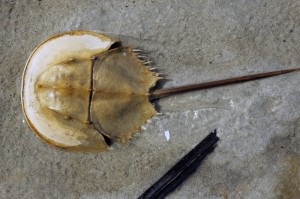 In Asia, three species of horseshoe crab are found. This is a mangrove horseshoe crab (Carcinoscorpius rotundicauda), washed ashore on a beach in Sabah, Borneo. (Photo copyright © by Kaj Halberg)
Carnivores and blue blood
The body of horseshoe crabs is covered in a hard, outer skeleton, the carapace, which is divided into an anterior part, the prosoma, or cephalothorax, and a posterior part, the opisthosoma. The prosoma is shaped like a horseshoe, hence the name of the animal. All around the edge of the opisthosoma is a row of short spines. The body ends in a long, dagger-like tail, which the animals – as you might think – do not use for fighting, but to dig into sand or mud, by bending the joint between the prosoma and the opisthosoma, and then shove with the tail. By continuously bending and shoving, they are able to disappear completely into the sea bottom. The tail is also used by animals, which, during egg-laying, have been rolled onto their back by waves, to turn over again, by drilling into the sand.

Horseshoe crabs have a number of eyes, two compound lateral eyes, a pair of median eyes, which can detect visible light as well as ultraviolet light, a single endoparietal eye, a pair of ventral eyes, located near the mouth, and a pair of rudimentary lateral eyes on the top.

The mouth is placed on the underside of the prosoma, and in front of the mouth are claws, called chelicers. They grab the food, which comprises small fish, worms, molluscs, soft-shelled clams and the like. Near the chelicers are five pairs of legs with small pincers, which, however, are too small to divide the food into smaller parts. Instead, the food is crushed against the spiny base of the legs. On the underside of the opisthosoma are six pairs of leg-like appendages, of which the posterior pair have joined to cover the genital opening. On the other five pairs of legs are leaf-shaped gills. Horseshoe crabs normally live near the shore, but can wander up to 50 kilometres offshore. Young horseshoe crabs are able to swim by moving the gills.

The blood of these animals is blue, caused by its content of copper instead of iron, which makes the blood of e.g. mammals and birds red. This blue blood is much utilized in medicinal research, because it immediately coagulates when in contact with bacteria or other foreign elements. This coagulant, which has been named limulus amoebocyte lysate (LAL), is used to detect diseases like spinal meningitis and gonorrhea, and to detect bacteria in transfusion blood. In the U.S., more than 200,000 horseshoe crabs are caught annually and tapped of blood, after which they are released again. 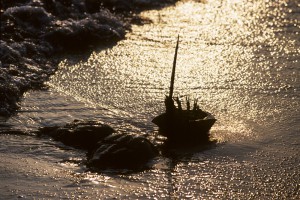 Horseshoe crabs have a very long, dagger-like tail, clearly seen on this animal, which has been overturned by a wave. (Photo copyright © by Kaj Halberg) 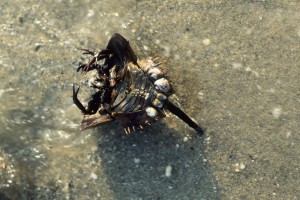 A wave has overturned this Atlantic horseshoe crab, which turns around by drilling its dagger-like tail into the sand. On the underside of the opisthosoma are five pairs of legs with leaf-shaped gills, and a sixth pair have joined to cover the genital opening. To the left the chelicers, which grab the food. Along the edge of the spiny carapace, several limpets have attached themselves. (Photo copyright © by Kaj Halberg)
Coming ashore to lay eggs
Horseshoe crabs are not easy to see alive, except when they come ashore to lay eggs. In the U.S., this happens mainly during full moon in May or June. In Delaware Bay, between the states of New Jersey and Delaware, hundreds of thousands of animals come ashore, literally covering the beach.

Each of the larger females has at least two or three smaller males attached to her. The animals are often overturned by waves, and they have a very hard time trying to turn over again, using their dagger-like tail. Some do not make it, but dry out in the fierce sun, or are eaten by large gulls like American herring gull (Larus smithsonianus) and great black-backed gull (Larus marinus). Others end up among stones in breakwaters, unable to free themselves.

Once safely ashore, a female horseshoe crab, surrounded by courting males, will dig one or several holes, laying up to 90,000 tiny, green, pearly eggs, which the males then fertilize. The female now returns to the sea, while the males will search for other egg-laying females. It cannot be avoided that some females during egg-laying dig up eggs of other females, and the shore is decorated with ribbons of washed-up eggs, which attract huge flocks of birds, mainly laughing gulls (Leucophaeus atricilla) and different species of waders.

The eggs are hatched by solar heat, and 4 to 6 weeks later, depending on temperature and availability of oxygen, the larvae appear. They look rather like tiny trilobites, a group of animals, which died out during the Perm, about 250 million years ago. They may therefore be related. The larvae swim around for about a week before hiding in the sea bottom to change their outer layer. Soon they get their first hard carapace, which will be renewed several times during the next 2 to 3 years. After 9 to 12 years, during which the carapace is renewed 16 or 17 times, the horseshoe crab is fully grown. In the largest species, the Atlantic horseshoe crab, the female can reach a length of about 60 centimetres (including the tail), the males a little less. They now start breeding, living a further 2 to 6 years. 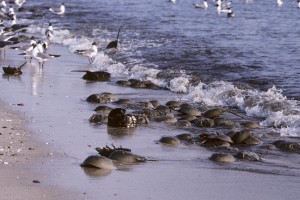 Along the shores of the Delaware River Estuary, during Full Moon in May or June, hundreds of thousands of Atlantic horseshoe crabs come ashore to lay eggs in the sand. The birds are laughing gulls (Leucophaeus atricilla), which feed on the eggs. (Photo copyright © by Kaj Halberg) 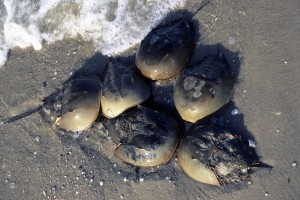 Female Atlantic horseshoe crab, surrounded by five courting males. She is about to dig into the sand to lay eggs. (Photo copyright © by Kaj Halberg) 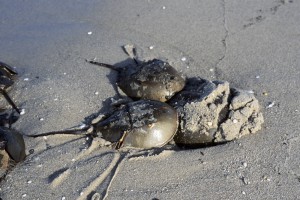 A female Atlantic horseshoe crab has dug a hole and is now laying eggs. Two males are waiting to fertilize the eggs. (Photo copyright © by Kaj Halberg) 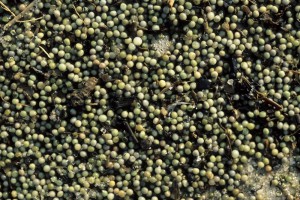 Each female horseshoe crab will dig one or several holes, laying up to 90,000 tiny, green, pearly eggs. (Photo copyright © by Kaj Halberg) 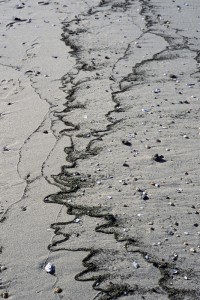 It cannot be avoided that some females during egg-laying dig up eggs of other females, and the shore is decorated with ribbons of washed-up eggs. (Photo copyright © by Kaj Halberg)
Fattening up on horseshoe crab eggs
The egg-laying of horseshoe crabs in Delaware Bay coincides with the north-bound migration of several species of waders from their wintering grounds in Central and South America. Thousands of turnstones (Arenaria interpres), red knots (Calidris canutus), semi-palmated sandpipers (Calidris pusilla), and sanderlings (Calidris alba) gather here to fatten up on the nutritious eggs, before resuming their migration towards their breeding grounds in the Arctic.

In the Delaware River Estuary, more than one million waders have been counted between early May and early June. These birds depend completely on the horseshoe crab eggs, as very little food is available in the Arctic at this time of the year. The birds literally starve, when they arrive on their breeding ground, so they need a considerable layer of fat to feed on. It has been estimated that each spring birds and fish consume about 320 tonnes of horseshoe crab eggs on the American shores. 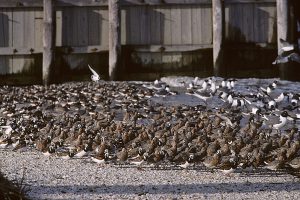 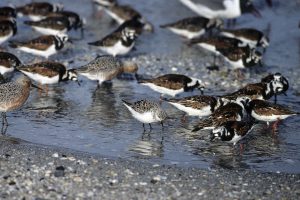 Turnstones, knots, and a single sanderling (Calidris alba), feeding on horseshoe crab eggs, Delaware Bay. (Photo copyright © by Kaj Halberg)
Threats against horseshoe crabs
While the young horseshoe crabs have many enemies, this is not the case with the adults. Some are eaten by loggerhead turtles (Caretta caretta), but their main enemy is Man. In Southeast Asia, boiled horseshoe crabs are considered a delicacy. However, eating them may have certain secondary effects, and they are not recommended for delicate Western stomachs!

In the U.S., the defenceless animals are collected by the truckloads. Formerly they were utilized as fertilizer and chicken feed, but today they are mainly used as fish bait. During the 1980s, app. 300,000 animals were caught annually, but numbers rose during the 1990s, and in 1998, in Virginia alone, one million were harvested. Other threats include reclamation of estuaries and creeks, house building, and construction of marinas, which destroy beaches used by horseshoe crabs during egg-laying. Almost everywhere, numbers of horseshoe crabs have declined. Conservationists are concerned, not only about these animals, but also about loggerhead turtles, which depend on eating adult horseshoe crabs, and numerous species of waders, which depend on their eggs.

In estuaries, which hold the most numerous populations of horseshoe crabs, such as Delaware Bay and Chesapeake Bay, commercial harvesting has now been banned. However, these means are not sufficient to stop the decline. In February 2000, the Atlantic States Marine Fisheries Commission ordered a reduction of 25% on commercial harvesting of horseshoe crabs. Conservationists argue that it is not sufficient, demanding a reduction of at least 50%.

For many years, researchers had been wondering about the surprising fact that eel and whelk, in their natural environment, do not feed on adult horseshoe crabs, yet they cannot resist them as bait. They spent years, trying to identify the ’scent’ that attract these animals, and by 2013 they had come up with an alternative bait, which might meet the fishermen’s needs, and thus help reduce the number of harvested horseshoe crabs.

Thus, in the future it may still be possible to enjoy the unique spectacle of thousands of egg-laying horseshoe crabs, surrounded by thousands of waders.