Seed heads of great burdock, weighed down by snow. (Photo copyright © by Kaj Halberg)
The stately great burdock (Arctium lappa) is biennial. The first year, it displays a rosette of dark green leaves and is not very imposing, but the following year, a vigorous stem shoots into the air, and umbrellas of large, rhubarb-like leaves spread out in all directions. On the underside of the leaves, you sometimes encounter batches of eggs, laid by the great tiger moth (Arctia caja).

The burdock stem has several branches, each with a cluster of flowerheads, displaying an abundance of lovely, purple flowers, which attract numerous hover flies, bumble bees, and butterflies. These beautiful flowerheads are surrounded by an armour of hooked prickles, which, however, are not meant as a means of defence, but as a way of spreading the seeds. When they are ripe, the entire flowerhead easily breaks off, if brushed by e.g. a fox’s pelt or a woollen sweater. Even when the plant is flowering, these hooks are nasty, and woe the small bird or bat, whose wing is caught in the hooks. They face a slow death, unless found by some predator.

The generic name of burdock is Arctium, derived from the Greek arktos (‘bear’), in allusion to the burs, which are somewhat similar to bear paws. One authority states that the specific name lappa is derived from a word, meaning ‘to seize,’ while another source maintains that it is from the Celtic llap (‘a hand’) – i.e. more or less the same meaning.

In October and November, goldfinches (Carduelis carduelis) often visit the burdocks near the farm house, where they tuck into the large, oil-rich seeds. The fledged young are still begging food from their parents, although they are now old enough to find their own food. At times, up to 30 goldfinches can be seen in the burdocks simultaneously.

In winter, the dry, rattling burdock stems stick out of the snow. The winter storms tear at them, causing the remaining seed heads to loosen, fall to the ground, and blow across the snowy expanse. Finally, the stems topple due to the pressure of snow and moisture, and a period of time will come without the company of the stately burdock.

You may read more about great burdock elsewhere on this website, see Plants: Plants in folklore and poetry, and Traditional medicine. 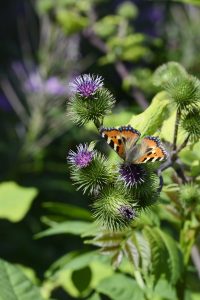 Along the edge of the burdock flowerheads are numerous hooked prickles. One wing of this blue tit (Cyanistes caeruleus) got stuck in these hooks, causing the death of the bird. (Photos copyright © by Kaj Halberg)

Here, a wing of a common pipistrelle (Pipistrellus sp.) has been caught in the hooks. (Photo copyright © by Kaj Halberg)

Goldfinches (Carduelis carduelis) often eat burdock seeds. In this picture, however, they visit a growth of bull thistle (Cirsium vulgare), the seeds of which are also a popular food with this bird. (Photo copyright © by Kaj Halberg)