The gliding lizard (Draco volans) is distributed in Southeast Asia, Malaysia, Indonesia, and the Philippines. It is also called flying lizard, which is not a very descriptive name, as it is not able to truly fly, but glides from one tree to another by spreading out its ribs, which are connected by a wing-like membrane, called a patagia. 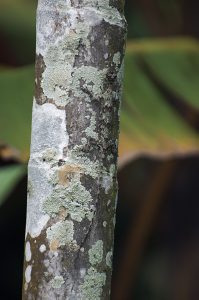 This gliding lizard is almost invisible, sitting on the lichen-covered trunk of a betel palm (Areca catechu), Bali, Indonesia. – You may read about this palm on the page Nature: Nature’s patterns. (Photo copyright © by Kaj Halberg)
The Eurasian golden plover (Pluvialis apricaria) breeds in Arctic and Northern Temperate areas, from Iceland and Scotland in the west, across northern Europe to central Siberia. Further east, it is replaced by the Pacific golden plover (P. fulva), whose breeding area reaches western Alaska, and in the remaining part of North America by the American golden plover (P. dominica). All three are very similar, with golden-speckled back and black breast in breeding plumage.

The generic name is from the Latin pluvia (‘rain’). Formerly, it was believed that when golden plovers would flock, it was a sign of imminent rain. In Icelandic folklore, the arrival of the first golden plover means that spring has come. 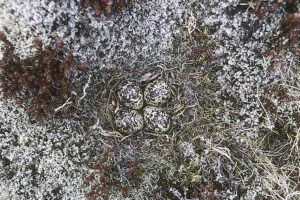 This nest of a Eurasian golden plover at Þingvellir, Iceland, is very well camouflaged, as the pattern on the eggs resemble the straw and lichens, surrounding the nest. (Photo copyright © by Kaj Halberg)
Praying mantises are a very successful group of insects, comprising more than 2,400 species, distributed worldwide in tropical and subtropical areas. They are ambush hunters, sitting motionless in the vegetation, waiting for suitable prey to approach. Their forelegs are enlarged and hooked, adapted for snatching and holding prey. As they sit there with their forelegs folded, their posture is not unlike a praying person, which gave rise to their common name. However, preying mantis would be a more proper name! 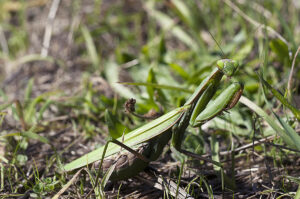 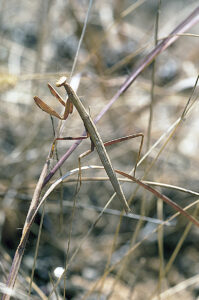 Praying mantises are often remarkably well camouflaged, resembling a withered grass stem, like this one in Helambu, Nepal. (Photo copyright © by Kaj Halberg) 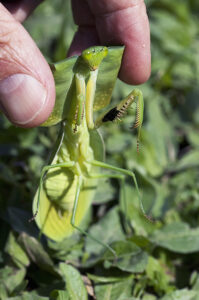 Other praying mantises resemble leaves, like this one, of the genus Choeradodis, encountered in Cordillera de Tilarán, Costa Rica. (Photos copyright © by Kaj Halberg)
A lizard in the family Agamidae, Swinhoe’s japalure (Diploderma swinhonis), also known as Taiwan japalure, is native to Taiwan. It feeds on arthropods and other small animals, living in forests, shrubberies, and city parks. It is often perched on trees where sunlight is present.

It was named in honour of British biologist Robert Swinhoe (1836-1877) who, in 1860, became the first European consular representative to Taiwan. He discovered many new species, and four mammals and 15 birds are also named after him. 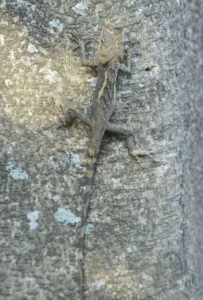 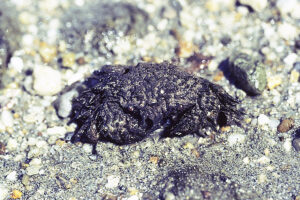 This moon crab of the genus Matuta is completely covered in a growth of sea algae, making it almost invisible, Mindoro, Philippines. (Photo copyright © by Kaj Halberg)
The common eider (Somateria mollissima) has an almost circumpolar distribution, found along Arctic and Northern Temperate coasts, from the Kola Peninsula westwards across Scandinavia, the northern British Isles, Iceland, Greenland, Maine, Arctic Canada, and Alaska, to the extreme eastern Siberia.

The nest of this species is built near the seashore, lined with down, which the female plucks from her own breast. This soft down has been harvested by people for hundreds of years, used as filling in pillows, quilts, and jackets. This harvesting was done with no harm to the birds, as it took place when the ducklings had left the nest.

The scientific name is derived from the Greek soma (‘body’) and erion (‘wool’), and the Latin mollissimus (‘very soft indeed’), all referring to soft down feathers. The name eider is a corruption of the Icelandic name of the bird, æðarfugl, which is derived from the Old Norse æðr.

In Northumberland, southern Scotland, the eider duck is known as the cuddy duck, named after Saint Cuthbert (c. 634-687), a monk, bishop, and hermit of the early Northumbrian Celtic church. While on the Farne Islands, he instigated special laws to protect the ducks and other seabirds, nesting on these islands. 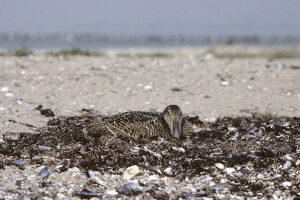 The mottled plumage of this incubating female eider, photographed on the Mågeøerne Islets, Funen, Denmark, blends in very well with the washed-up seaweeds, in which she has placed her nest. (Photo copyright © by Kaj Halberg)
Bush frogs of the genus Pseudophilautus, comprising about 80 species, belong to the family Rhacophoridae. This genus is restricted to Sri Lanka and the Western Ghats of southern India. Many species are highly endangered, and some have already become extinct. 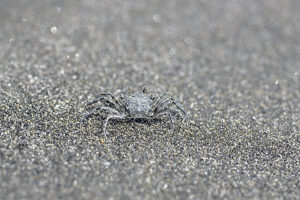 This tiny crab blends in very well with the grey sand on a beach, Bali, Indonesia. (Photo copyright © by Kaj Halberg)
The purple sandpiper (Calidris maritima) breeds in the Arctic tundra in northern Canada, Greenland, Iceland, and western Siberia, and along the Scandinavian mountain range. It spends the winter along shores of north-western Europe and the North American Atlantic Coast. 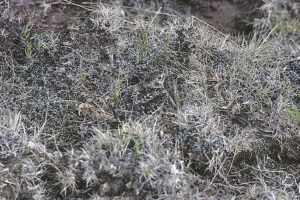 From a distance, this incubating purple sandpiper is almost impossible to spot among the withered grass on Selvogsheiði Moor, southern Iceland. I only found this nest, because I observed the bird from my car, when it was relieving its incubating mate. (Photo copyright © by Kaj Halberg) 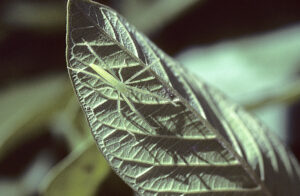 This thin, green spider, observed near Banawe, northern Luzon, Philippines, resembles the nerves on the underside of the leaf, on which it is sitting. (Photo copyright © by Kaj Halberg)
The little tern (Sternula albifrons) has a very wide breeding distribution, with main strongholds in west-central Asia and the Far East, and with scattered populations in Europe, western Africa, Indonesia, the Philippines, and New Guinea. During the 20th Century, most European populations declined drastically due to habitat loss, pollution, and human disturbance. 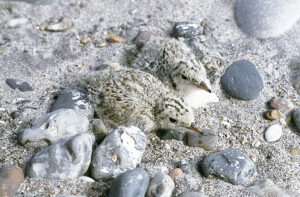 I nearly stepped on these juvenile little terns, before I noticed them, flattening themselves among pebbles, Nissum Fjord, Jutland, Denmark. (Photo copyright © by Kaj Halberg)
Butterflies and moths, and their caterpillars, are often well camouflaged.
The lemon emigrant (Catopsilia pomona), which belongs to the family Pieridae, is widely distributed, from the eastern Himalaya eastwards to eastern China, Taiwan, and Japan, and thence southwards through Southeast Asia, Indonesia, and the Philippines to Australia and islands in the Pacific. The name emigrant alludes to its migratory habit. 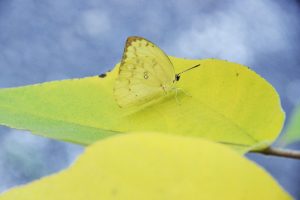 This lemon emigrant is well camouflaged on a winter leaf of paper mulberry (Broussonetia papyrifera), Taichung, Taiwan. This tree is presented on the page Nature: Invasive species. (Photo copyright © by Kaj Halberg) 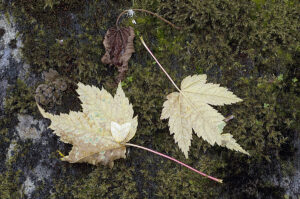 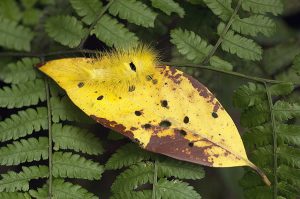 Sitting on a yellow leaf, this hairy caterpillar is very well camouflaged. Note the black spot on its body, resembling a hole in the leaf. – Malabang National Forest, Hsinchu, Taiwan. (Photo copyright © by Kaj Halberg) 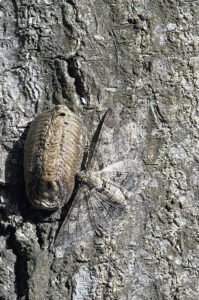 An almost invisible moth, sitting on bark next to a cocoon, Chingshuian Recreation Area, Taiwan. (Photo copyright © by Kaj Halberg)
Marmots (Marmota) are 15 species of giant squirrels, which are distributed in central and southern Europe, western and central Asia, and North America. These animals live in underground dens, and, with the exception of the American woodchuck, or groundhog (Marmota monax), which may live in forests, they are restricted to grasslands. Some species are presented on the page Animals – Mammals: Squirrels.

Himalayan marmot (M. himalayana) is found at altitudes between 3,500 and 5,200 m, throughout the Himalaya and on the Tibetan Plateau. 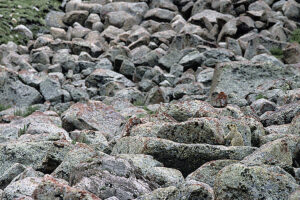 This Himalayan marmot is surveying its domain among lichen-covered boulders in the Markha Valley, Ladakh, India, blending in very well with the surroundings. (Photo copyright © by Kaj Halberg)
As their name implies, stick insects, also called walking sticks, resemble sticks, or withered grass stems, making them difficult for predators to spot. These animals, which belong to the order Phasmatodea, are found on all continents, except Antarctica, with the highest diversity in the Tropics.

Stick insects can grow fairly large, as this one in Sumatra, Indonesia. The largest species, found in Borneo, has a body length up to 35 cm. (Photo copyright © by Kaj Halberg) 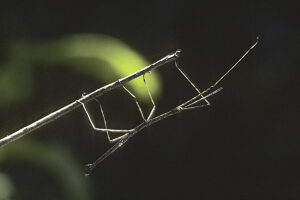 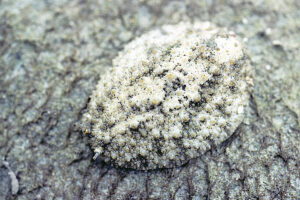 This extremely well camouflaged sea slug is rasping off algae from the surface of a rock, Pulau Kapas Island, Malaysia. (Photo copyright © by Kaj Halberg) 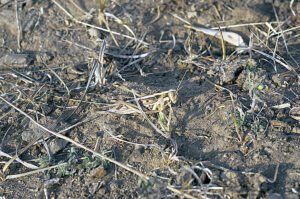 This grasshopper in Bagan, Myanmar, resembles the withered grass around it. Note the red mites on its body. (Photo copyright © by Kaj Halberg)
Scorpions are predatory animals, characterized by a pair of so-called pedipalps, with which they grab their prey, and their tail, often carried in a curve over the back, ending in a venomous stinger. Scorpions vary enormously in size, from Typhlochactas mitchelli, which is only 9 mm long, to Heterometrus swammerdami, which can grow to 23 cm. (Source: Guinness Book of Records) 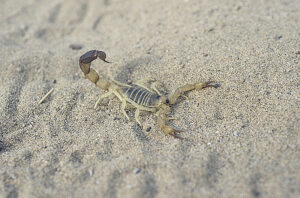 Yellow scorpion in yellow sand. – I found it one morning, hidden under my bedding, during a camel safari into the Thar Desert, Rajasthan, India. My adventures in this desert are related on the page Travel episodes – India 2003: Camel safari in the Thar Desert. (Photo copyright © by Kaj Halberg)
Plants of the genus Lithops, of the ice-plant family (Aizoaceae), remarkably resemble the pebbles, among which they grow. This genus, comprising about 37 species, is confined to South Africa, Namibia, and Botswana. The generic name is from the Greek lithos (‘stone’) and ops (‘face’), referring to the similarity of these plants to small stones. Popular names include living stones and pebble plants. 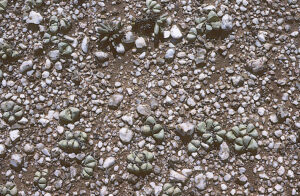 This species of Lithops was photographed on Knersvlakte (‘Grinding Plain’), near Vanrhynsdorp, South Africa. (Photo copyright © by Kaj Halberg) 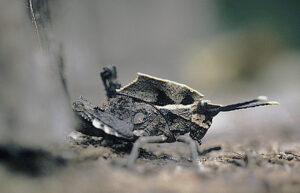 This grasshopper in Rondo Forest, southern Tanzania, greatly resembles a withered leaf. (Photo copyright © by Kaj Halberg)
As its name implies, the canyon tree frog (Hyla arenicolor) lives in rocky areas, distributed in south-western United States and in Mexico, south to the state of Oaxaca. 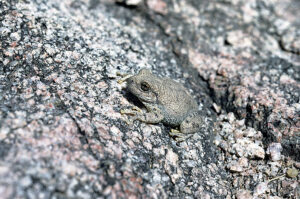