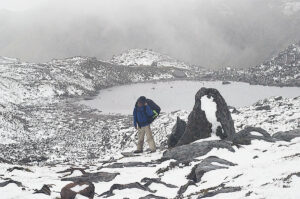 Below the Laurebina La Pass (4609 m), my guide Tanka Bahadur Pantha enjoys a brief lull in a snowstorm. The lake in the background is Surya Kund, one of the 54 lakes in this area, which are all sacred to Hindus. In the Hindu pantheon, Surya is the Sun God. (Photo copyright © by Kaj Halberg)
A mountainous area north of Kathmandu, central Nepal, holds 54 lakes, all of which are sacred to Hindus. Every year, during Full Moon in July or August, thousands of devout pilgrims undertake the demanding hike to these lakes to have a cleansing bath in their icy waters. Orthodox Hindus wish to bathe in all 54 lakes.

According to Hindu legend, the creation of these lakes is linked to the epic drama The Churning of the Milk Ocean from the Bhagavata-Purana. This legend relates that the gods had become weakened and had been usurped by the asuras (demons). The gods appealed to the supreme god Vishnu for help, and he suggested that they should regain their power by drinking the miraculous amrita, the nectar of immortality, which they could obtain by churning the cosmic milk ocean, thus bringing the jar with amrita to the surface. However, Vishnu advised the other gods to treat the asuras diplomatically by suggesting them to jointly churn the ocean. When the amrita was brought to the surface, Vishnu would ensure that the gods got hold of it.

To perform this stupendous task, the gods and the asuras uprooted the mountain Mandara, placing it upside down in the ocean, and coiling the giant, many-headed naga (serpent) Vasuki around it. By pulling alternately at each end of Vasuki, the mountain would act as a gigantic churn, thus bringing the amrita to the surface. However, the mountain began sinking into the ocean floor, so Vishnu assumed the shape of a gigantic avatar (incarnation), named Kurma, half man, half turtle, dived to the bottom of the sea, and placed Mandara on his back, thus supporting the churning.

Finally, the jar with amrita surfaced, whereupon a fierce battle between the gods and the asuras ensued, the latter grabbing the jar and running away with it. Again, the gods appealed to Vishnu, who assumed the form of a new avatar, Mohini, a beautiful goddess, who seduced the asuras and managed to get hold of the jar of amrita, thus preventing evil from becoming eternal, and preserving the good.

The churning, however, was extremely painful to Vasuki, who began spitting out large quantities of venom. This was noticed by the supreme god Shiva, who swallowed the poison to save the other gods, which made him suffer terribly from fever and thirst. To relieve his sufferings, he went into the Himalaya in search of water, but found none. He now cast his trisul (trident) on the rocks, whereupon gigantic springs emerged and created 54 lakes. Shiva lay down to quench his thirst from the second largest of these lakes, which was later named Gosain Kund. (Gosain is another name for Shiva.)

Below the surface of this lake is an oval rock, which devout Hindus regard as Shiva, resting on the serpent Vasuki. A smaller stone on top of the oval rock is seen as a lingam – a phallus-shaped symbol of fertility, which is connected with Shiva. The river, which drains the lake, is Trisuli Khola, named after Shiva’s trident.

The rich plant and animal life around the Gosainkund Lakes, and elsewhere in Langtang National Park, is described in depth on the pages Plants – Plant hunting in the Himalaya: Around sacred lakes of Shiva, and Travel episodes – Nepal 2009: Across a snow-covered pass. Hindu gods and other aspects of Hinduism are dealt with on the page Religion: Hinduism. 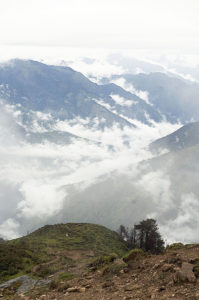 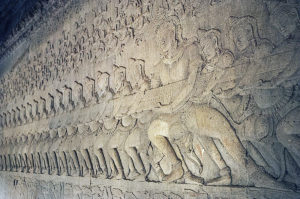 The creation of the Gosainkund Lakes is linked to the epic Hindu drama ‘The Churning of the Milk Ocean’. – This Khmer frieze in Angkor Wat, Cambodia, depicts the gods, pulling on the body of the naga (serpent) Vasuki, which was used to churn the ocean. (Photo copyright © by Kaj Halberg) 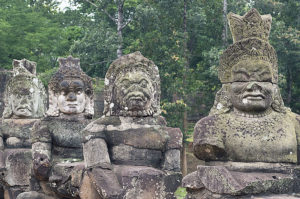 Khmer statues in Angkor Thom, Cambodia, depicting some of the asuras (demons), holding on to the other end of Vasuki. (Photo copyright © by Kaj Halberg) 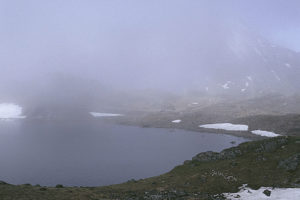 On most days, fog and rain descend on the lakes of the Gosainkund area. (Photo copyright © by Kaj Halberg) 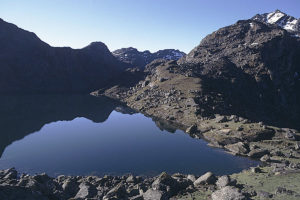 On a clear day, the sacred lakes appear in all their glory. This picture shows the second largest lake, Gosain Kund. (Photo copyright © by Kaj Halberg) 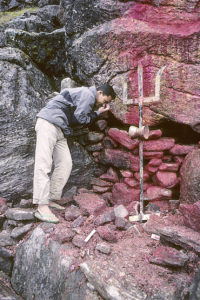 Ganga Thapa, a young man of the Chhetri caste, applies a tika mark on his forehead, taking the vermilion dye from a small Shiva shrine at Gosain Kund. The trisul (trident) is a symbol of Shiva, and the river, which drains the area to the east, is Trisuli Khola, named after his trident. (Photo copyright © by Kaj Halberg) 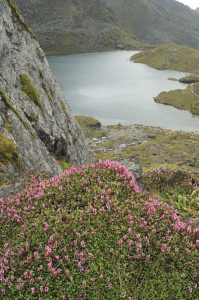 This rock near one of the sacred lakes, Bhairab Kund, is covered by a species of pinkweed, Bistorta vacciniifolia. – Bhairab is another name of Shiva, used by the Newar people of Nepal. (Photo copyright © by Kaj Halberg)
(Uploaded February 2016)
(Latest update August 2020)
Text & photographs © Kaj Halberg, 2015. All rights reserved. Contact: respectnature108@gmail.com