Many plants have adapted to a life along railways, which often constitute a refuge – at least until the worker arrives with chemical herbicides or a mower.
Originally, the Jiancing Line Lumber Transportation Track, eastern Taiwan, was about 5.5 km long. As its name implies, it was constructed to bring out timber from the Taipingshan Mountains, which today constitute the Taipingshan National Forest Recreation Area. The Jiancing Historic Trail was established along remains of this old railroad track, where, besides the tracks themselves, one may see skids, switches, trolley axles, and deserted workers’ dwellings. 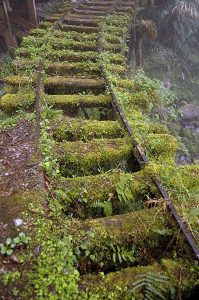 Abandoned railroad tracks, overgrown by mosses, ferns, and other plants, Jiancing Historic Trail. (Photo copyright © by Kaj Halberg)
Herb Robert (Geranium robertianum) is a species of crane’s-bill, which is native to most of Europe, North Africa, western Asia, and parts of North America. It was once known as Saint Robert’s herb, named after a French monk, who lived around 1000 A.D. He cured people, suffering from various diseases, using this plant. American native tribes also used it medicinally.

This species is very common along railroad tracks. It comes in two distinct forms, one with green leaves and reddish stems, and one with bright red stems and leaves (var. rubricaule). For some reason or other, the red form is the one most often noticed along railroad tracks – at least in Scandinavia.

In these pictures, rosebay willow-herb (top) and great willow-herb have both sprouted between railroad tracks in the town of Køge, Zealand, Denmark. (Photos copyright © by Kaj Halberg)
White melilot, or white sweet clover (Melilotus albus), is a native of southern and eastern Europe, eastwards to Central Asia. In former days, it was cultivated in other parts of Europe, and in North America, as a fertilizing plant, as its root nodules – like with other members of the pea family (Fabaceae) – contain bacteria, which are able to fixate nitrogen from the air. When these bacteria die (and they are very short-lived), the plant can utilize the nitrogen. When the plant dies, the nitrogen is released into the soil, for other plants to utilize. It also makes excellent hay.

Today, white melilot is not cultivated at a larger scale. Nevertheless, it has become widely naturalized in most temperate and subtropical areas of the world, especially in abandoned lots and along newly established roads.

The generic name is from the Latin mel (‘honey’) and lotus (a plant of the pea family), alluding to the fact that it is an excellent bee plant. The common name sweet clover refers to the sweet smell of the plant. 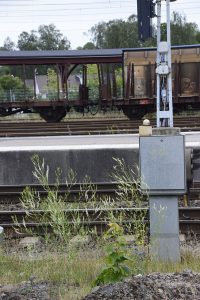 Sand rock-cress (Arabidopsis arenosa) is a native of central Europe, from France eastwards to Latvia and Ukraine, and from south-eastern Denmark south to northern Italy and Macedonia, but has been introduced accidentally elsewhere. 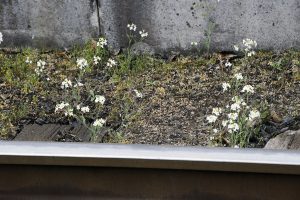 In Sweden, sand rock-cress is very common, mainly spreading along railways. This picture is from Alvesta Railway Station, in the southern part of the country. (Photo copyright © by Kaj Halberg)
Common sow-thistle (Sonchus oleraceus) is native to Europe and western Asia but has spread to most other areas of the world. It is regarded as an invasive plant in many countries, including Australia, where it is a serious problem in crops. It is easily identified by its slightly prickly, deeply divided leaves.

The generic name Sonchus is a Latinized form of the Greek word sonchos, the ancient name for sow-thistles, whereas oleraceus is from the Latin oleris (‘edible’). Young leaves can be eaten as salad or cooked like spinach. The common name refers to the fact that pigs like to eat this plant, and to the leaves, which resemble young thistle leaves.

Other pictures of this species may be seen at Nature: Urban nature. 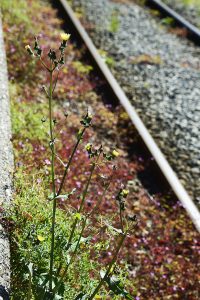 Common sow-thistle, growing along a railroad track in the city of Aarhus, Denmark. The red plants in the background are a red variety of Herb Robert (Geranium robertianum var. rubricaule), and the green plant is tufted vetch (Vicia cracca). (Photo copyright © by Kaj Halberg)
Solanum is one of the largest plant genera in the world, counting more than 1,300 species, among these a number of very important food species, including potato (S. tuberosum), tomato (S. lycopersicum), tomato tree (S. betaceum), and eggplant (S. melongena). Two species are native to northern Europe, bittersweet nightshade (S. dulcamara), which has red berries, and black nightshade (S. nigrum) with black berries.

Bittersweet nightshade is a climber, which is very common in most of Europe, and in a belt across the central parts of Asia, eastwards to Japan. It is also commonly naturalized in North America, where it is considered an invasive weed. Its red berries look very inviting, but are poisonous to people.

The generic name Solanum is of unknown origin. It may stem from the Latin verb solare (’to soothe’), referring to the medical properties of some nightshade species. A number of nightshade species are described on the page Plants: Plants in folklore and poetry.

Bittersweet nightshade prefers to grow in humid areas, sometimes forming dense, almost impenetrable growths. However, it is also able to thrive in drier areas, such as this plant, growing near a railroad track at Horsens Station, Denmark. (Photo copyright © by Kaj Halberg)
Today, the yellow-flowered common wintercress (Barbarea vulgaris) – also known as yellow rocketcress, winter rocket, and wound rocket, is very common in northern Europe, especially in abandoned plots, and along roads and railways. This was not always the case, as it was introduced during the 1700s from its native areas in southern Europe, North Africa, and the Near East. It has also been introduced to many other places, including Iceland, North America, and Australia.

The generic name is adapted from a medieval name of the plant, Herba Sanctae Barbarae (’Saint Barbara’s wort’). Holy Barbara was regarded as the patron saint of artillery men and miners, and as wintercress was considered a good healer of wounds, it was named after her. (Source: M. Skytte Christiansen 1970. Danmarks vilde planter (’Wild Plants of Denmark’) 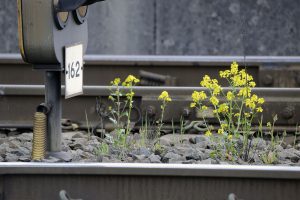 Pale toadflax (Linaria repens), also called creeping, or striped, toadflax, is native to south-western Europe, but is widely naturalized elsewhere in Europe, and in North America, presumably brought with soil, which acted as ballast on board cargo ships. The generic name Linaria means ‘resembling linum’ (flax). The leaves of some species of toadflax superficially resemble those of flax. The specific name repens means ‘creeping’. Pale toadflax, however, is often erect. The common name striped refers to the purple stripes on the whitish flowers. 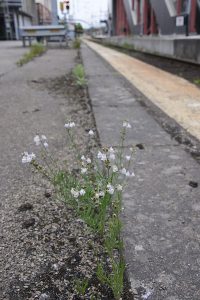 The preferred habitat of pale toadflax is dry soils, and it is quite common along railroad tracks, here at Alvesta, southern Sweden. (Photo copyright © by Kaj Halberg)
Wall lettuce (Mycelis muralis, by some authorities called Lactuca muralis) is native to most of Europe, north-western Africa, and West Asia, eastwards to the Caucasus, where it may be found up to an altitude of 2,300 m. It has also become naturalized in North America and New Zealand. Its main habitat is woodlands, but it may also be found in open areas, such as forest clearings, city walls, stone fences, and along railroads. The specific name muralis is from the Latin murus (‘wall’).

Wall lettuce, growing between railroad tracks, Horsens, Denmark. (Photo copyright © by Kaj Halberg)
Groundsels, or ragworts (Senecio), are a huge genus of the composite family (Asteraceae), comprising c. 1,200 species worldwide. Several species have adapted to a life along railways.
Eastern groundsel (Senecio vernalis) blooms early in the year. Originally, it was a native of south-eastern Europe and western Asia, but was introduced to other parts of Europe in the 1700s, presumably with imported crops. Today, it is extremely common, especially on poor soils, and is regarded as a severe pest in grass, clover, and alfalfa fields.

Eastern groundsel, Copenhagen Railway Station, Denmark. A number of other plants are also seen, including snowdrop anemone (Anemone sylvestris), escaped from a garden, corn salad (Valerianella locusta), dandelion (Taraxacum officinale), colt’s foot (Tussilago farfara), and soft brome (Bromus hordeaceus). (Photo copyright © by Kaj Halberg)
As its name implies, the sticky groundsel (Senecio viscosus), also called sticky ragwort or stinking groundsel, is very sticky. The following quotation gives a vivid impression of its stickiness: “Sticky groundsel has characteristic glandular hairs, which secrete a substance that is as sticky as fly paper, and by the end of summer it is quite a mess with all the dust, sand, small insects, hairs, feathers, downy seeds, its own cypselas [seeds], candy wrappers, and who knows what else that have stuck to it.” (Source: luontoportti.com/suomi/en/kukkakasvit/sticky-groundsel)

Originally, sticky groundsel was a native of southern and central Europe and western Asia. Since the 1800s, it has spread considerably, mainly along railroads, and has become naturalized in northern Europe, Canada, United States, and elsewhere. 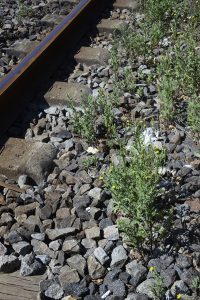 Sticky groundsel, growing at railroad tracks, Skanderborg Station, Denmark. (Photo copyright © by Kaj Halberg)
Creeping bellflower (Campanula rapunculoides) is a native of southern Europe and West Asia, and it has become naturalized in North America, where it is considered an invasive weed, which chokes out other plants. It resembles several other bellflower species, but can be identified by its long, one-sided inflorescence. It grows in rather open, partly shaded areas, such as forest edges, roadsides, hedgerows, and along railways, and it often occurs in gardens as a weed. The tuberous root of this species is edible, with a taste similar to parsnip. In the past, its young leaves were eaten as salad in the Nordic countries.

Other bellflower species are presented on the pages Plants: Flora of the Alps, and In praise of the colour blue. 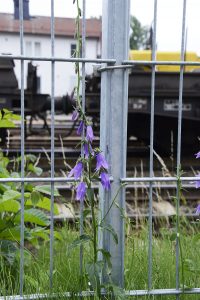 Dandelion (Taraxacum officinale) is ubiquitous in Europe, also along railroad tracks. It is described in detail on the page Plants: Plants in folklore and poetry. 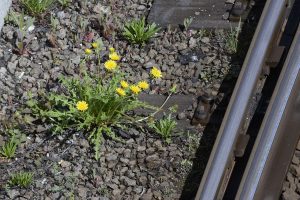