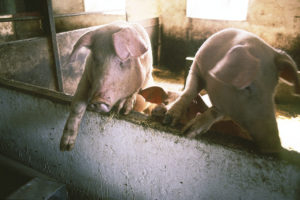 What has become of our food? – Farm pigs in western Jutland, Denmark. (Photo copyright © by Kaj Halberg) The domestic pig is descended from the wild boar (Sus scrofa). This wild boar sow and her piglets enjoy a mud bath at a waterhole, Sariska National Park, Rajasthan, India. (Photo copyright © by Kaj Halberg)
It was an evening in November,
As I very well remember,
I was strolling down the street in drunken pride,
But my knees were all a-flutter,
And I landed in the gutter,
And a pig came up and lay down by my side.
Yes, I lay there in the gutter,
Thinking thoughts I could not utter,
When a colleen passing by did softly say:
“You can tell a man who boozes
By the company he chooses.” –
And the pig got up and slowly walked away.
Limerick, author unknown.
The domestic pig, also called swine, or hog, is descended from the wild boar (Sus scrofa), and most authorities regard it as a subspecies, domestica, of that species, whereas others maintain that it is a separate species, named Sus domestica. 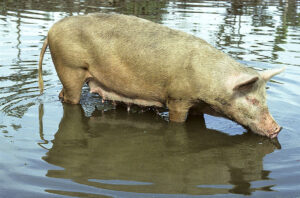 Typical domestic pig, Pokhara, Nepal. (Photo copyright © by Kaj Halberg)
Early domestication
Archaeological evidence suggests that domestication of the wild boar took place as early as around 13000 B.C. in Mesopotamia, with a separate domestication taking place in China about 6000 B.C. As the wild boar has an omnivorous diet, this domestication process was rather easy.

When Europeans migrated to the Americas, Australia, New Zealand, and elsewhere, they, naturally, brought pigs along. Descendants of these pigs have become feral in many parts of the world, including North and South America, New Zealand, northern Australia, and parts of Europe, often causing considerable damage to the environment.

Pig facts
The world population of domestic pigs is around 1 billion, making it as numerous as sheep and goats. 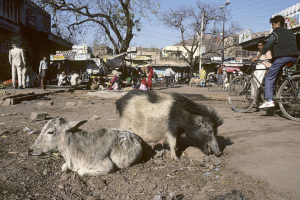 In the Indian Subcontinent, most domestic pigs still resemble the wild boar quite a lot, but may have a piebald fur. This one is sharing a gutter with a resting zebu calf in the town of Bundi, Rajasthan. The zebu is described on the page Animals as servants of Man: Cattle, banteng and yak. (Photo copyright © by Kaj Halberg)
Sows are loving mothers, nursing their piglets about every hour. The gestation period is 112-120 days. 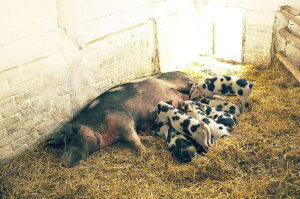 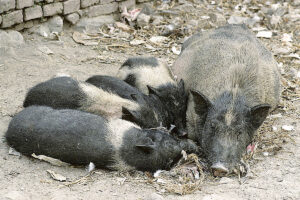 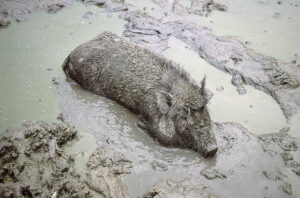 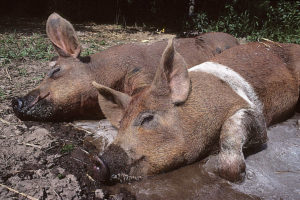 Sonpur, Bihar, India (top), and Jutland, Denmark. (Photos copyright © by Kaj Halberg)
In many countries around the world, a pig sty is a very simple affair – or simply lacking. 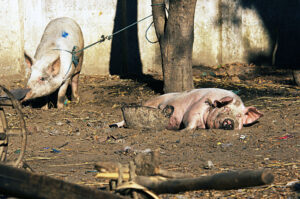 These pigs in central Myanmar have merely been tied to a tree at the road side. (Photo copyright © by Kaj Halberg) 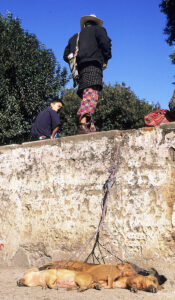 This sow and her piglets have been tied to a ring in a wall, Solola, Guatemala. (Photo copyright © by Kaj Halberg)
Pig breeds
As with other domestic animals, a huge number of pig breeds have evolved over time.
Pot-bellied pigs are a breed, which originated in Vietnam. Today, it is found in many countries in Southeast Asia. 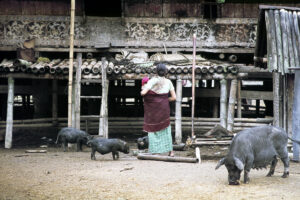 Pot-bellied pigs in Lingga, a Batak village in central Sumatra, Indonesia. (Photo copyright © by Kaj Halberg)
The Andaman pig is only found in the Andaman and Nicobar Islands, a long string of small islands, stretching from Myanmar southwards to the Indonesian island Sumatra. Some scientists regard these pigs as a subspecies, andamanensis, of the wild boar. To me however, it is much more likely that it was introduced by the original Negrito inhabitants of these islands, as it resembles the pot-bellied pig of Southeast Asia far more than it does the wild boar. Some of these introduced pigs probably escaped to form wild populations. 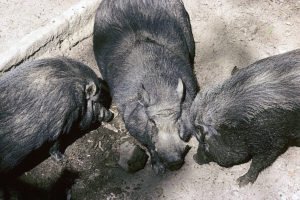 These Andaman pigs were photographed in Port Blair Zoo, Andaman Islands. (Photo copyright © by Kaj Halberg)
The Linröd pig is an old Swedish breed, which is very rare today, numbering only about 150. 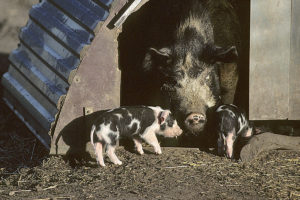 Linröd sow with piglets, Västergötland, Sweden. (Photo copyright © by Kaj Halberg)
Usage
Pigs are mainly utilized as food, but in earlier days, various items were produced from pig skin, including shields. Tools and weapons were made from the bones, and brushes from the stiff hairs.

In many places in Asia, so-called pig-toilets are still in use in rural areas. It simply consists of an outhouse, built over a pig sty. The faeces fall down into the sty, where the pigs consume them – an eco-friendly and economical way of getting rid of human waste.

A new trend is pigs as pets, usually dwarf forms. 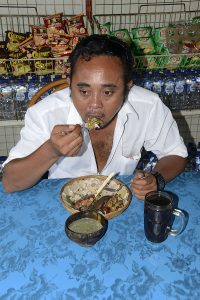 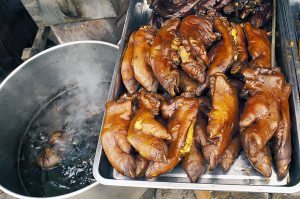 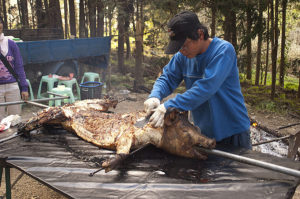 Prior to the invasion of Taiwan by Chinese peoples, the indigenous Malayan tribes of this island roamed the forests, hunting wild boar and other animals. Today, they still love whole roasted pig, but now raise domestic pigs for the purpose. (Photo copyright © by Kaj Halberg)
Free-running pigs
In Europe, and elsewhere, free-running pigs are a rather recent, but increasing trend, as a growing number of consumers demand products from animals, which have not been kept under cruel conditions. 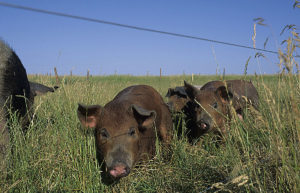 Free-running pigs on the island of Fur, Denmark. (Photo copyright © by Kaj Halberg)
Clever animal
The pig is a clever animal, and keeping it in small enclosures is a cruel act, which totally disregards the basic needs of pigs, namely to roam about freely and root in the ground with their snout.

The cleverness of the pig was used by English author George Orwell, aka Eric Arthur Blair (1903-1950), who was very much opposed to the totalitarianism, which had just shown its true nature in Germany, and was now being practiced, on the pretext of socialism, by Russian dictator Josef Stalin, who is portrayed in Blair’s novel from 1945, Animal Farm.

In this novel, the animals, led by the clever pigs, usurp the wicked farm owner, Mr. Jones, declaring that “all animals are equal.” Later, “a large, rather fierce-looking Berkshire boar”, named Napoleon, assumes power on the farm and kills his rival Snowball, using dogs he himself has trained. He now declares that “all animals are equal, but some animals are more equal than others,” turning into a replica of Mr. Jones, just much worse. In the end, he even fraternizes with humans, keeping the other animals as slaves. As they peep through the windows, “the creatures outside looked from pig to man, and from man to pig, and from pig to man again; but already it was impossible to say which was which.” 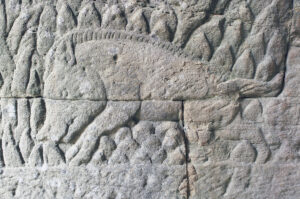 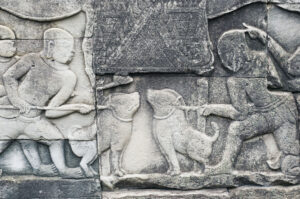 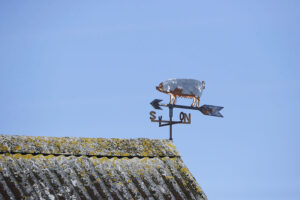 The population of domestic pigs in Denmark is around 13 million, so it would seem strange, if this animal did not appear on weather vanes. This one was encountered on a farm on the islet of Nyord, near Møn, Denmark. (Photo copyright © by Kaj Halberg)
(Uploaded September 2017)
(Latest update October 2022)
Text & photographs © Kaj Halberg, 2015. All rights reserved. Contact: respectnature108@gmail.com