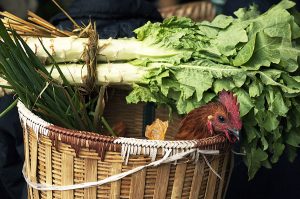 Purchases at a market in Yuanyang, Yunnan Province, China: a rooster and vegetables in a basket. (Photo copyright © by Kaj Halberg) 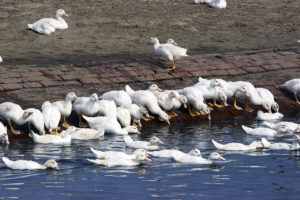 Mass breeding of Beijing ducks, near Fuxing, south of Taichung, Taiwan. (Photo copyright © by Kaj Halberg)
Chickens
Recent studies indicate that chickens, or simply fowl, were first domesticated in China about 8000 B.C., descended from the red junglefowl (Gallus gallus), which is still found in the wild in India and Southeast Asia. Later, about 6000 B.C., domestication of the red junglefowl also took place several places in Southeast Asia and in India, where some hybridization with the grey junglefowl (Gallus sonneratii), living in the southern part of India, may have occurred.

By 3900 B.C., chickens were present in Iran, by about 2400 B.C. in Turkey and Syria, and by 2000 B.C., they had reached Spain. They arrived about 1400 B.C. in Egypt, where they were called “the bird that gives birth every day” – in allusion to the prolific egg-laying of the species. In West Africa, Iron Age cultures in Mali, Burkina Faso, and Ghana were keeping domesticated chickens from about 500 A.D.

From Southeast Asia, sailors brought chickens to the Polynesian islands about 1300 B.C., and in Chile, remains of domesticated chickens, dating from c. 1350 A.D., have been excavated. Before these excavations, it was believed that the first chickens to arrive in the Americas were brought by Columbus on his second voyage in 1493. Chickens arrived in Australia with the First Fleet, bringing settlers to the continent in 1788.

Today, the chicken is the most numerous and widespread domestic animal, with a total population of more than 19 billion. Chickens are kept primarily as a source of food, both meat and eggs. 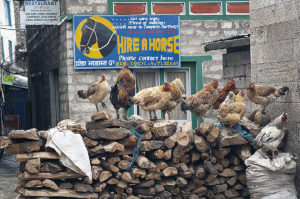 Early in the morning, these chickens in Namche Bazaar, Khumbu, eastern Nepal, are still sitting on their night roost – a pile of firewood. (Photo copyright © by Kaj Halberg) 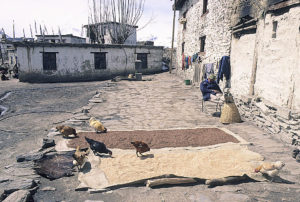 This man in the Jhong River Valley, Mustang, central Nepal, is guarding wheat and buckwheat, drying in the sun. He fell asleep on his post, which was soon detected by nearby chickens, who take advantage of it to fill their gizzards. (Photo copyright © by Kaj Halberg) 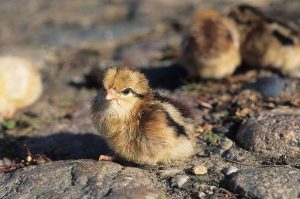 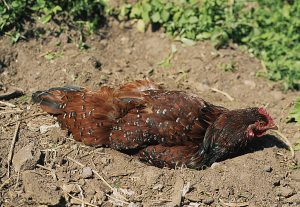 Chickens love dust bathing, which will often rid them of parasites like fleas. (Photo copyright © by Kaj Halberg) 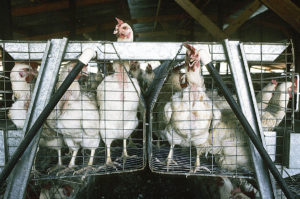 Chickens are often kept under cruel conditions, like these cage chickens in Palapye, Botswana. Today, an increasing number of consumers buy eggs and chickens of free-running chickens, whose feed has been grown organically. (Photo copyright © by Kaj Halberg) 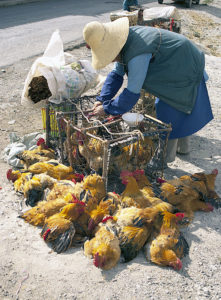 Chickens for sale at a market near Er Hai Lake, Yunnan Province, China. To prevent them from straying, their feet have been tied together. (Photo copyright © by Kaj Halberg) 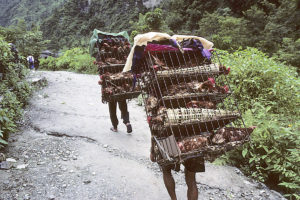 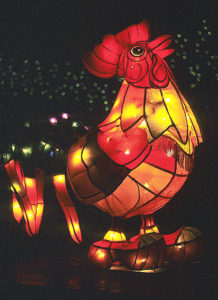 This enormous paper lantern, depicting a rooster, is exhibited during the Festival of Lanterns, celebrated during Chinese New Year 2005 (the Year of the Rooster in the Chinese Zodiac), Tainan, Taiwan. (Photo copyright © by Kaj Halberg)
For thousands of years, cock fighting was a popular sport in many countries, including India, Indonesia, China, Japan, and Polynesia. Two trained cocks, often with metal spurs attached to their natural spurs, were released, fighting until one of the contestants was dead, slashed by the spurs. Cock fighting is still practiced in a few countries today. This Khmer frieze in Angkor Thom, Cambodia, depicts a fight between cocks, owned by Khmer people (left), and by Chinese, identified by their pigtail. (Photo copyright © by Kaj Halberg)

Cock fighting is still practiced in a few countries today, here in Sarawak, Borneo. (Photo copyright © by Kaj Halberg)
Ducks
Almost all domestic ducks are descended from the mallard (Anas platyrhynchos), which is very widely distributed across subarctic, temperate, and subtropical areas of North America, Eurasia, and North Africa, southwards to Mexico. Morocco, Egypt, Pakistan, and China. It has also been introduced to many other places as a hunting object, including South America, New Zealand, Australia, and South Africa. The drake is a gorgeous bird in breeding plumage, with grey sides, purple breast, and glossy-green head, with a blue shine from certain angles. The female is a uniform speckled brown.

Mallards were first domesticated at least 4,000 years ago, in Southeast Asia. In Ancient Egypt, ducks were captured in nets and then bred in captivity, and domestic ducks are frequently depicted in Egyptian wall paintings in graves and elsewhere. At an early stage, ducks were also farmed by the Romans. The Beijing duck (formerly called Peking duck), a distinct breed in China, also descended from the mallard.

In many places, white domestic ducks developed, probably being favoured in preference to darker breeds, as they were easy to spot, in case they should stray. Domestic ducks have also lost the territorial behavior of the mallard, being less aggressive. Despite these differences, domestic ducks are still very closely related to the mallard, the two forms producing fertile offspring. These semi-tame ducks, which are often found in city parks, come in all plumages, varying from pure white to ‘almost-wild-mallard-type’.

Ducks are mainly farmed for their meat and eggs, and for their down. In some countries, the blood from slaughtered ducks is used as an ingredient in various dishes. Some breeds have been developed for ornamental reasons and are often exhibited in competitions. 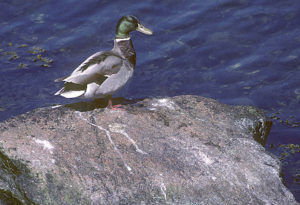 The mallard drake is a beautiful bird. – This one was photographed on the islet of Christiansø, Bornholm, Denmark. (Photo copyright © by Kaj Halberg)

Female mallard, resting on a fallen log in a pond, Horsens Fjord, Denmark. The bird in the background is a sleeping common teal (Anas crecca). (Photo copyright © by Kaj Halberg) 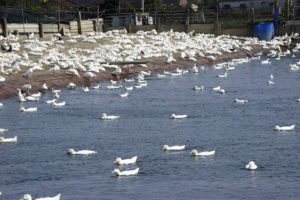 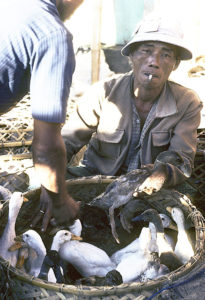 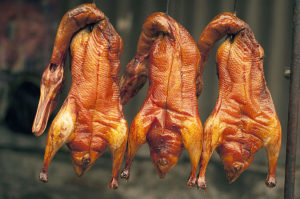 Barbecued ducks, displayed at a market, Yuanyang, Yunnan Province, China. (Photo copyright © by Kaj Halberg)
The Muscovy duck (Cairina moschata) is a type of domesticated duck, which is not descended from the mallard. This duck, which is heavier than the common domestic duck, is native to Central and South America, from Mexico south to northern Argentina.

The name Muscovy duck has nothing to do with the Grand Principality of Moscow, founded in 1283 (in English often called the Muscovy), although the spelling of the duck’s name, with a capital M, could easily lead to this misconception. The name is thought either to be a corruption of musk duck, due to its musky smell, or derived from the Spanish word mosquito, named after the Mosquito Coast in Central America, where Spanish conquistadors first encountered this duck.

The earliest known domestication of the Muscovy duck took place in the Mochica culture, southern Peru, and in coastal Ecuador, by about 50 to 80 A.D. In Bolivia, it is known as a domestic animal from about 600 A.D., and in Central America from about 750 A.D. With the arrival of the Spanish conquistadors in the 1500s, the Muscovy duck was taken to Europe, and from there it has spread around the world.

Feral populations of the Muscovy duck have been established in the United States and southern Canada, as well as in New Zealand, Australia, and various places in Europe. 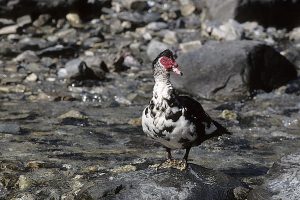 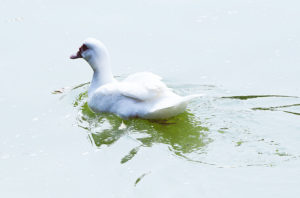 Today, both forms of domestic geese are found worldwide, and as the greylag goose and the swan goose are rather closely related, hybrids between the two domestic forms often occur.

Domestic geese are kept for meat and eggs, and for their excellent down, used in quilts, down jackets, sleeping bags, and other items. 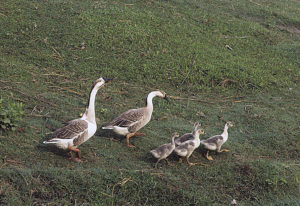 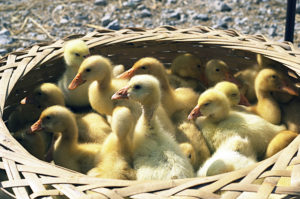 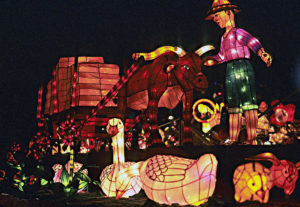