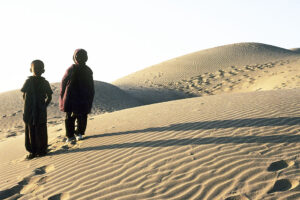 Children from the village of Bambara, in the heart of the Thar Desert, cast long evening shadows on a sand dune. (Photo copyright © by Kaj Halberg)
The vast Thar Desert stretches across the state of Rajasthan, north-western India, and further west into Pakistan. Here and there in this desert, golden sand dunes, up to 50 m high, dominate the landscape, but for the main part it consists of level sand or gravel plains with scattered bushes and trees, including a cactus-like species of spurge, Euphorbia caduca, locally called thor, Sodom apple (Calotropis procera), called akaro, and a small tree, Salvadora procera, called dzal.

The fruit of Sodom apple was first described by Roman historian Titus Flavius Josephus, born Yosef ben Matityahu (c. 37-100 A.D.), who found it growing near the city of Sodom: “which fruits have a color as if they were fit to be eaten, but if you pluck them with your hands, they dissolve into smoke and ashes.” (Source: W. Whiston 1737. The War of the Jews, Book IV, Chapter 8)

Titus is referring to the fact that the ripe fruit easily dissolves, releasing hundreds of downy seeds, which are scattered to the four winds. 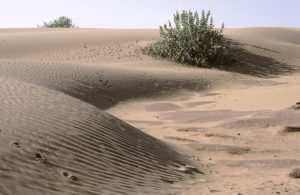 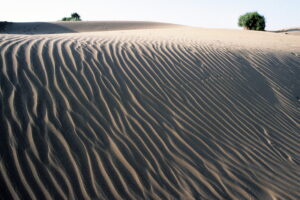 Ripples, formed by the wind, create patterns on a dune. (Photo copyright © by Kaj Halberg)
‘The Golden City’
The Thar Desert is surprisingly densely populated, inhabited by people of various religious beliefs, including Hindu Rajputs, Jains, Bishnois, and Muslims.

Scattered across the bleak landscape lie numerous towns and villages. One such town is Jaisalmer, close to the Pakistani border, which was founded in 1156 by a Rajput prince, Roa Rawal Jaisal. As many of its buildings are constructed of golden-yellow sandstone, it has been dubbed ‘The Golden City’.

During the era of the great trading caravans, a side branch of the Old Silk Road led through this town. Travelling along this route, numerous camel caravans brought goods to and from India, trading with faraway China, Persia, Turkey, and Europe. As wealth accumulated in Jaisalmer, rich traders built extravagant and ornate sandstone mansions, called havelis, their walls and balconies decorated with beautiful and detailed carvings.

Wealth, however, also attracts robbers, so in order to protect his people, Roa Rawal Jaisal ordered a strong fort, Sonar Qila, to be constructed atop a 76-metre-high hill. The population was then moved inside the walls of the fort, which was fortified with 99 ramparts. Large stone balls and long stone cylinders were placed on the walls, and during sieges, Rajput soldiers would roll these balls and cylinders over the edge, causing many casualties among attackers, who attempted to scale the walls of the fort. Still today, some of these balls remain on the walls.

As the population of Jaisalmer increased, people began building houses outside the fort, so as a means of protection, the Rajput prince ordered a wall, 4.5 km long, to be erected around this new part of the town. 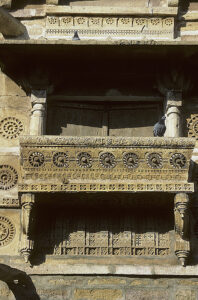 Many mansions in Jaisalmer, called havelis, are constructed from blocks of yellow sandstone, carved into the most intricate patterns. (Photo copyright © by Kaj Halberg) 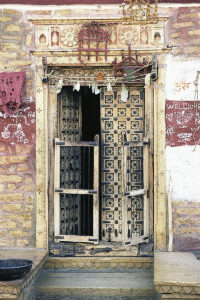 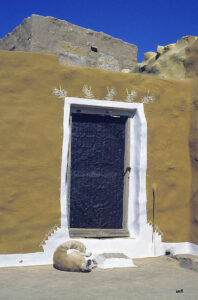 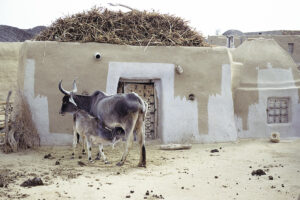 Numerous villages are scattered across the desert. This zebu calf is suckling outside the Hindu village of Khorma. (Photo copyright © by Kaj Halberg) 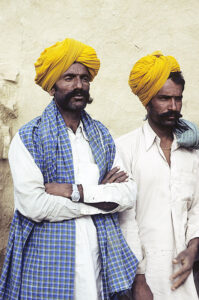 Most Rajasthani men wear a large turban. Often the colour of the turban indicates, which village you come from. (Photo copyright © by Kaj Halberg) 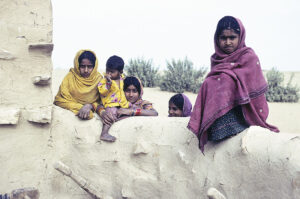 Village children in the Thar Desert. (Photo copyright © by Kaj Halberg)
K.K.’s troubles
Camel caravans are history, but you can get a feel of the daily life of caravans by going on a camel safari. K.K., the owner of a small travel agency, arranges a safari for me. He brings me by car from Jaisalmer to the vilage of Akal, and on our way he relates the widespread misery in Rajasthan, caused by a severe and prevailing drought. Cattle, goats and camels die from thirst. Many farmers have given up farming, instead becoming road workers, or migrating to towns to try to survive as day-labourers.

K.K. himself has had a fair share of problems. He and his brothers own a rather large piece of farmland, but his brothers neglect it, leaving it to K.K. to earn money for the entire family through his travel agency. He has paid their wedding expenses, and also contributed half a million Rupees to their farming, which, however, did not result in an increased production. K.K. is bitter, calling his brothers a bunch of good-for-nothing parasites. 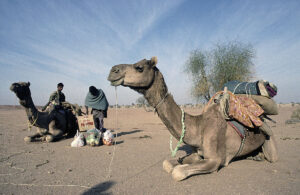 Camel caravans are history, but you can get a feel of the daily life of caravans by going on a camel safari. (Photo copyright © by Kaj Halberg)
Camel safari with Jamset and Dina
Camels in this part of the world are the one-humped dromedary (Camelus dromedarius), in Rajasthani unth.

Arriving at Akal, we meet with my two camel drivers, Jamset and Dina Khan, and their three camels, which look rather arrogant, but turn out to be gentle and peaceful animals, with large and beautiful eyes. In winter, when she camels are in heat, bulls in rut often emit a gargling roar, blowing up their tongue and letting it hang out of the mouth, smeared in pink saliva. My camel drivers make this comment: “The camel is sexy.”

Camels have an ambling walk, which takes time to get used to. On my first day as a camel rider, my thighs and buttocks quickly get quite sore. I regularly dismount to take pictures, often walking beside the camel for hours. 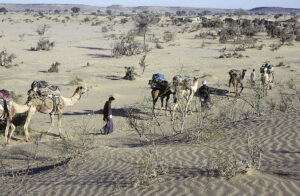 The dromedary is still used as a means of transportation in the desert. (Photo copyright © by Kaj Halberg) Portrait of a dromedary, chewing its cud. (Photo copyright © by Kaj Halberg) 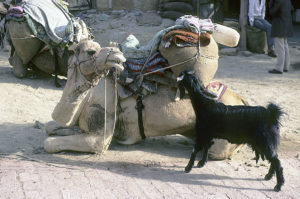 A goat, looking for edible items among loaded provisions, is chased away by the dromedary. (Photo copyright © by Kaj Halberg) 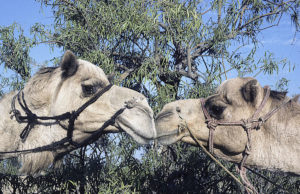 Dromedaries can be very affectionate. (Photo copyright © by Kaj Halberg)

Bull dromedaries in rut blow up their tongue, which hangs out of the mouth, covered in pink foam. My camel drivers made this comment: ”The camel is sexy.” (Photo copyright © by Kaj Halberg) 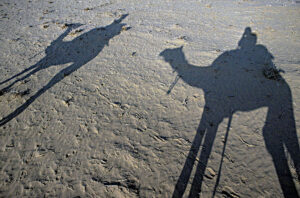 A dromedary is a tall animal, so don’t fall off! (Photo copyright © by Kaj Halberg)
Desert camp
We pass several villages, where I get an impression of the harsh desert life. Almost everywhere, you notice grazing goats, sheep, camels, or cattle, trying to get their fill on the sparse vegetation.

Shortly before dusk, we make camp. The baggage is unloaded, and our blankets are rolled out in the sand. No need for tents here, as the risk of rain is next to none. However, nights in the desert are rather cold, so my sleeping bag is of good use.

Jamset and Dina collect a few dead branches from nearby trees, light a fire and start preparing our evening meal. Meanwhile, I am seated, leaning against a camel’s soft body, watching the flickering fire, while the camels are chewing their cud, their neck bells tinkling softly. While cooking, my camel drivers sing sad songs about love or precious rain.

The night is wonderful. To lie snug in your sleeping bag on the soft desert sand, under a thousand twinkling stars, and maybe a falling star or a moving satellite, is indeed meditative. 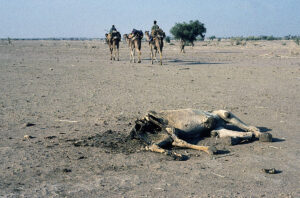 When rain is scarce, the Thar Desert is a harsh place. Here are the remains of a dromedary which died from thirst. (Photo copyright © by Kaj Halberg)

Our dromedaries quench their thirst in a water reservoir near the village of Rama. (Photo copyright © by Kaj Halberg) 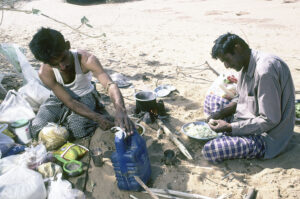 The commonest mammal is the Gujarat gazelle (Gazella bennettii ssp. christii), locally known as chinkara. On several occasions, I also encounter the desert fox (Vulpes vulpes ssp. pusilla), of which one is eagerly digging in the sand for mice, or maybe beetles. 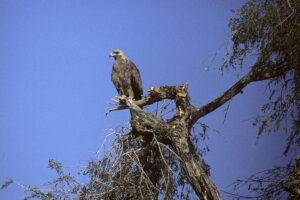 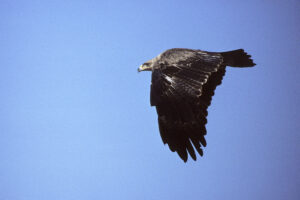 Tawny eagle, taking off from an acacia tree. (Photos copyright © by Kaj Halberg) 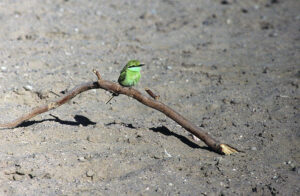 The little green bee-eater, comprising about 9 subspecies, is distributed across sub-Saharan Africa and in the Nile Valley, in western Arabia, and from southern Iran across the Indian Subcontinent to Vietnam. (Photo copyright © by Kaj Halberg) Male variable wheatear. As its name implies, the plumage of this bird is variable. Back and throat of the male are always black, and the vent is always white, but breast, belly, and crown may be either black or white. (Photo copyright © by Kaj Halberg) 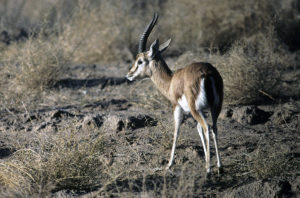 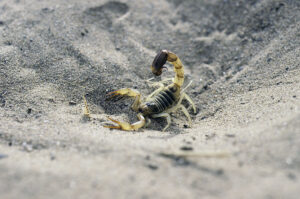 One morning I found this scorpion, hidden under my bedding. (Photo copyright © by Kaj Halberg)
Bambara – a Muslim village
Jamset and Dina are Muslims. When they inform me that we shall pass close to their village, I suggest that we pay it a visit. They readily agree to this.

As it turns out, their village, Bambara, comprising about twenty houses, is situated at the end of a valley, beneath marvellous sand dunes. Most houses are made of clay, which has been applied to a frame, constructed of branches. Before the clay dried, the women drew fine patterns, trees and other images in it. The roof is made of straw. In front of every house is a courtyard, worn smooth by many feet. At one end of the village sits the school – an ugly concrete building, which seems out of place among the beautiful clay houses.

We camp in the dunes outside the village, where we are soon joined by many men and children. We invite them for supper, which makes heavy inroads into our provisions. However, Jamset assures me that we have ample supplies, and besides, K.K. has given him extra money to buy more provisions.

After the meal, an elderly man entertains us, singing sad songs, as usual about love and precious rain, but also a song about a brother, who was lost in war. Next, a young man performs a wild dance, with much gamboling, while a boy beats the time on a tin tray.

The following morning, I pay a visit to several houses in the village. All inhabitants are more or less blood-related, and marriages outside the village are rare. However, apart from a young man who is an albino, I see no sign of inbreeding. On the contrary, the villagers are beautiful and erect people. Presumably, the hard desert life sorts out the weak ones.

Many of the men sport a full beard, looking rather like Baluchis from western Pakistan. They do not grow the enormous ’cycle-handle’ moustache, which is so popular among the Hindu Rajputs. The women’s dress is very beautiful, the upper half a patchwork of bits of cloth, silver, and small, glittering buttons. Around their wrist – and sometimes also their neck – they wear heavy silver jewellery. 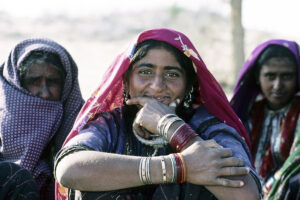 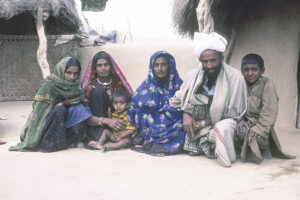 Family in their courtyard, Bambara. (Photo copyright © by Kaj Halberg) 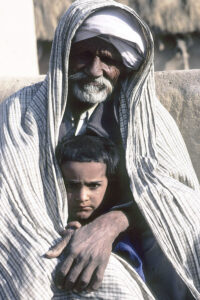 An elderly man and his grandchild, Bambara. (Photo copyright © by Kaj Halberg) 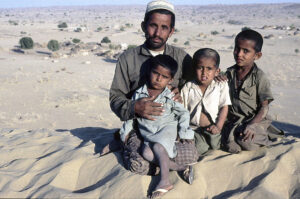 This man is sitting on a sand dune with his children, near Bambara. (Photo copyright © by Kaj Halberg)
Evening atmosphere in the desert
In a beautiful yellowish evening light, flock upon flock of goats and sheep are ushered towards the village from the surrounding desert. The dunes turn golden, and the khejari trees (Prosopis cineraria) down in the valley cast long shadows. The fruits of this tree are an important source of food for the desert people.

One of Jamset’s camels, its forelegs tied together, hobbles into our camp, presumably hoping to get at bit more hay. However, there is no more hay. It is meagre times, for men as well as for the camels, whose hump has been reduced to a pitiful little thing, hanging down their side. ”Camel caput,” says Dina. I guess it is not quite as bad, but if rain will not soon fall, their camels may very well perish.

At dusk, a white-eared bulbul (Pycnonotus leucotis) is calling from a dzal bush. Otherwise a complete silence prevails. 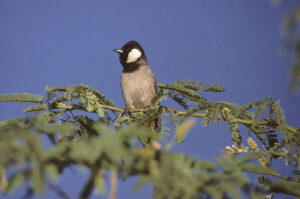