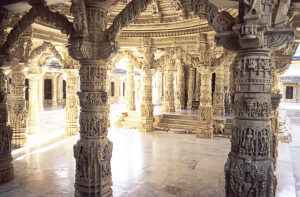 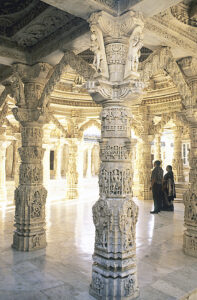 The main hall of Vimal Vasahi, a Jain temple, carved in white marble, Dilwara, Mount Abu, Rajasthan. (Photos copyright © by Kaj Halberg)
Jainism was founded in India at about the same time as Buddhism (see Religion: Buddhism). The founder of this religion was Mahavira (c. 540-468 B.C.), who, like Siddharta Gautama, was a prince.

At the age of 30, he abandoned his easy life to become an ascetic in search of a solution to eliminate pain, sorrow, and sufferings. He spent the next 12 years in deep silence and meditation to conquer his desires, feelings, and attachments, while carefully avoiding to harm other living beings.

Jains regard Mahavira as being the last of 24 Tirthankaras, who, according to Jain teachings, were ordinary human beings, who had attained a state of perfection through meditation and self-realization. Tirthankaras are the teachers, who guide people along the virtuous path towards a life without desire – similar to the Buddhist nirvana and the Hindu moksha (see Religion: Buddhism, and Religion: Hinduism). 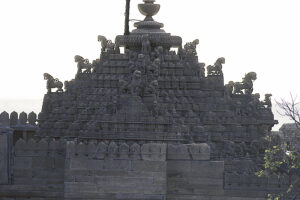 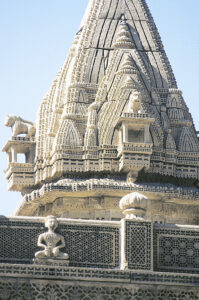 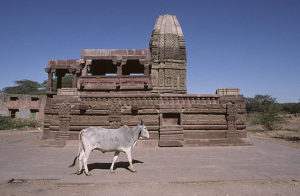 A zebu ox, passing by ruins of a Jain temple near Osiyan, Rajasthan. – This ox is described on the page Animals: Animals as servants of Man. (Photo copyright © by Kaj Halberg) 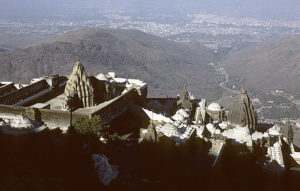 Early morning light on Neminath, a Jain temple situated atop Mount Girnar, Gujarat. Below is the town of Junagadh. (Photo copyright © by Kaj Halberg)
An ascetic way of life
Jains live according to five important rules: You must not harm living beings, not steal, and not lie, you should be sexually continent, and you should give up material goods. As a consequence of the first of these rules, Jainism is more common among traders and artisans than among farmers, and, naturally, all Jains are vegetarians. They regard karma – the sum of good and evil doings in your life – as pollution of your soul, which must be cleansed, using all means.

Followers of the Digambara school (‘the sky-clad’) are all male, claiming that women cannot obtain moksha. They walk about naked, carrying only a picchi (a broom made of shed peacock feathers, which is used for clearing the ground in front of them, so that they don’t harm any insects or other small creatures), a kamandalu (a water container made from wood), and shastra (scriptures).

The other school is the Śvētāmbara (‘the white-clad’), whose followers wear white clothes, maintaining that ascetics do not have to be naked. They also believe that women are able to obtain moksha, claiming that the 19th Tirthankara, Mallinatha, was a woman.

Today, Jainism has about six million followers, most of them living in the Indian states of Maharashtra, Rajasthan, and Gujarat. Despite the fact that Jainism has always had a limited distribution, it had a considerable influence on India’s struggle for independence, as Mahatma Gandhi adopted the concept of non-violence, ahimsa, from Jainism. 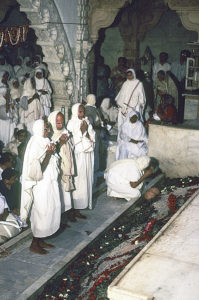 Early in the morning, white-clad Jain pilgrims pray before climbing the stairs to the temples atop Shetrunjaya, near Palitana, Gujarat. (Photo copyright © by Kaj Halberg)
Giant statue of Bahubali
Since c. 200 A.D., the small town of Sravanabelagola, c. 80 km north of Mysore, Karnataka, has been an important site for Jain pilgrims. The tongue-twisting name of this town means ‘white pond of the Jain ascetic’. Altogether c. 30 Jain temples are situated in this town, and on two striking rocks nearby, Vindyagiri (’Big Hill’) and Chandragiri (’Small Hill’).

About 620 steps have been carved into Vindyagiri, leading to the top of the rock, c. 150 m higher. This rock holds a huge statue of a Jain saint, Bahubali (also called Gomateswara), who was the son of the first Tirthankara. This 17.5-metre-high sculpture was carved from one huge granite rock around 980 A.D., during the heyday of Jainism. The width of its shoulders is 7.2 m, the length of the middle finger 1.8 m. According to legend, Bahubali spent 12 years in such deep meditation that vines grew around his body. A niche behind the statue holds images of the 24 Tirthankaras.

Usually, Sravanabelagola is a peaceful little town, but every 12 to 16 years – depending on the position of the stars – thousands of pilgrims stream into the place to celebrate the Mahamastakabhisheka ceremony. During this festival, a scaffold with a platform is erected behind the statue, from which 1,008 pots, containing sacred water, is poured over the head of Bahubali, followed by coconut milk, yoghurt, bananas, milk, gold dust, and various other offerings. 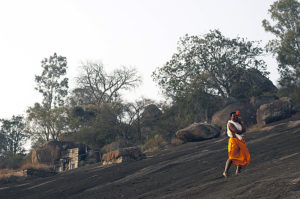 This pilgrim is on his way up the steep Vindyagiri rock to pay his tribute to a giant statue of Jain saint Bahubali. (Photo copyright © by Kaj Halberg) 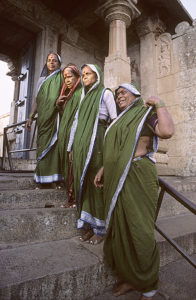 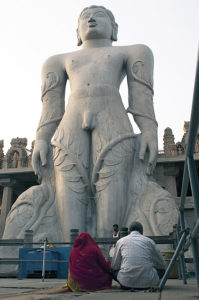 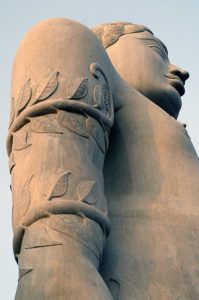 Detail of the statue of Bahubali. It is said that he was in such deep meditation that vines grew up his body. (Photo copyright © by Kaj Halberg) 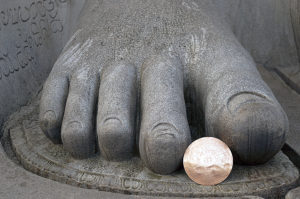 Copper plate with inscriptions, placed as an offering at the foot of the Bahubali statue. (Photo copyright © by Kaj Halberg) 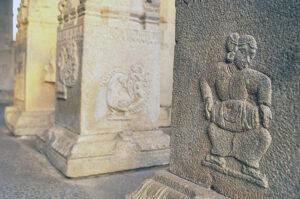 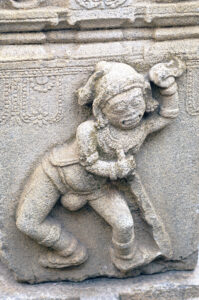 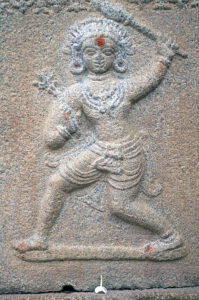 This relief, likewise in the Vindyagiri Temple, depicts a warrior. A pilgrim has adorned him with a red tika mark on the forehead, and another has placed a flower at his feet. (Photo copyright © by Kaj Halberg) 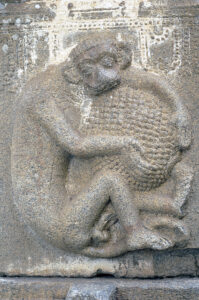 This carving in the Vindyagiri Temple depicts a monkey, hugging a jackfruit (Artocarpus heterophyllus). – Many species of monkeys are described on the page Animals – Mammals: Monkeys and apes, whereas the jackfruit is dealt with on the page Travel episodes – Sri Lanka 1976: Among alcohol brewers. (Photo copyright © by Kaj Halberg)
The Dilwara Temples
Five temples, situated on Mount Abu, Rajasthan, constitute a major pilgrimage site for Jains. These exquisite buildings, called the Dilwara Temples, are famous for their stunning marble carvings. They were constructed between the 11th and 13th centuries, at the request of Vastapul Tejpal, a Jain layman. 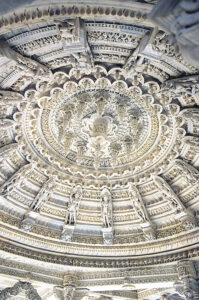 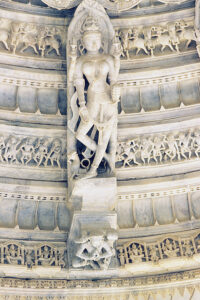 The ceiling in Vimal Vasahi is carved out of white marble. (Photos copyright © by Kaj Halberg) 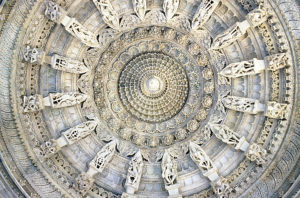 The same accounts for the ceiling in Luna Vasahi, another Dilwara temple. (Photo copyright © by Kaj Halberg) 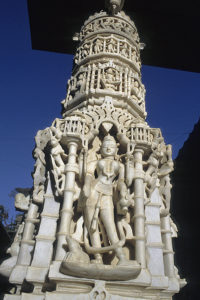 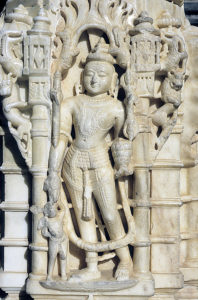 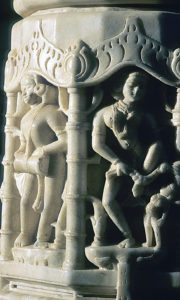 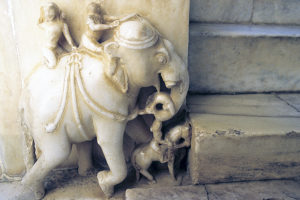 Marble elephant and horse riders, Vimal Vasahi. (Photo copyright © by Kaj Halberg)
The Shetrunjaya Temples
Hundreds of Jain temples are situated on the Shetrunjaya Hills near Palitana, Gujarat. These hills were sanctified, when Rishaba, the first Tirthankara, gave his first sermon here. 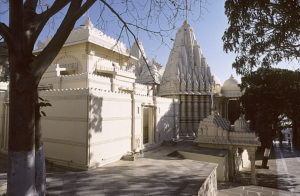 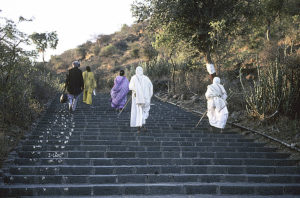 Early in the morning, pilgrims climb the stairs, leading up to a Jain temple on Shetrunjaya. The plant to the right is a cactus-like spurge, Euphorbia caduca, locally called thor. (Photo copyright © by Kaj Halberg) 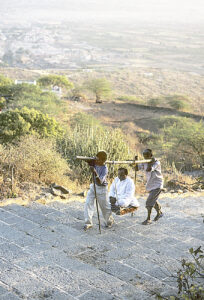 This pilgrim, either too fat or too lazy to walk, is carried up the stairs to the Shetrunjaya temples. (Photo copyright © by Kaj Halberg) 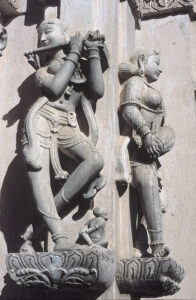 Carving in a Shetrunjaya temple, depicting female musicians, a flutist and a tabla player. (Photo copyright © by Kaj Halberg) 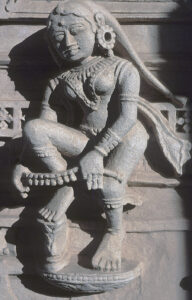 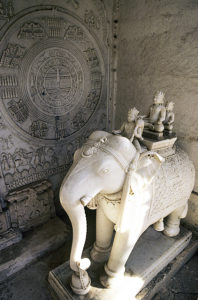