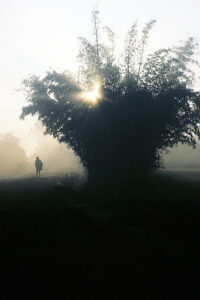 Foggy morning in the Nepal Terai, the tropical lowland plains beneath the foothills of the Himalaya. On his way to work in the fields, this farmer is hurrying past a growth of bamboo. (Photo copyright © by Kaj Halberg)
In Kathmandu, the capital of Nepal, I approach a cycle rickshaw driver and ask him how much he will charge me to bring me to a street near the post office.

“50 Rupees? But that is more expensive than going by motor rickshaw!”

“25 Rupees? But then you have to take me back here again!”

Oblivious of the insane traffic, he zooms like a madman left and right among cars, pedestrians, and other cycle rickshaws.

When I reach my goal, still alive, I buy bus tickets for my companion Jette Wistoft and myself to go to Varanasi, India, a two-day trip with an overnight stay in the border town of Bhairawa. 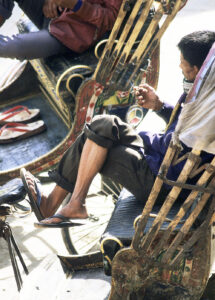 I approached a cycle rickshaw driver. This one takes a rest while waiting for customers. (Photo copyright © by Kaj Halberg)
Through farmland
Our bus leaves Kathmandu, climbing towards a small pass, whereupon it descends through a number of hairpin bends, passing countless terraced rice fields and small villages with two-storey, ochre-coloured houses. People are winnowing their rice harvest, weaving baskets, or performing one of the many other tasks of Nepalese farmers.

This landscape is not suitable for road construction, and every year, during the heavy monsoon showers, some parts of the road are washed away. Therefore, road repairs are often taking place, and this day is no exception. On several occasions, we have to wait in a long line of cars, as only half of the road is passable.

Down in the valley, the road heads west along the Trisuli River. When we make a lunch stop in Mugling, we are already behind schedule. The Nepalese national dish, daal bhat tarkari (rice with lentil soup and vegetables) is served on a thali, a steel tray, with a section for each item. The food is delicious, liberally spiced with chili and cumin.

After our meal we sip sweet cardamom tea, but our driver urges us to hurry up. From Mugling, we race down a steep road along the Narayani River, heading for the town of Narayangarh. Further belated by a puncture, it is very late in the day, before we reach the Terai, the flat plains beneath the foothills of the Himalaya. 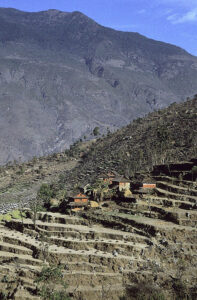 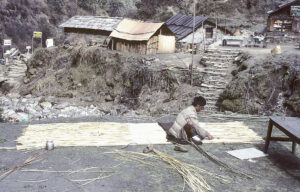 Along the road, people were busy weaving baskets, or performing one of the many other tasks of Nepalese farmers. (Photo copyright © by Kaj Halberg) 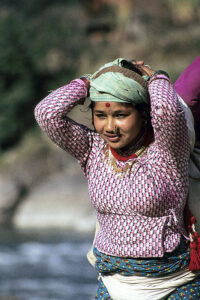 This girl is carrying a sack of harvested millet. (Photo copyright © by Kaj Halberg) 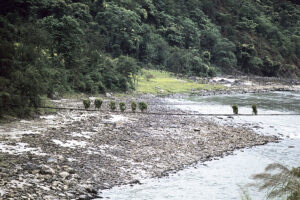 Women, transporting huge bundles of harvested foliage, to be used as fodder for cattle or buffaloes, across a suspension bridge, spanning the Trisuli River near Mugling. (Photo copyright © by Kaj Halberg)
Mishap with drive shaft
In the lowland, roads are level and in good condition, so the bus engine is strained to its limits. Suddenly we hear an enormous thundering sound, followed by a rattle. The bus comes to a halt, and everybody descends to investigate. The front drive shaft has fallen off! Oh, dear! Are we going to wait here all night, while they send for another bus?

No-no! A wooden box is brought out from the bus, containing the Nepalese standard tools: hammer, plier, and screwdriver. Two of the bus crew disappear under the bus, where they set to work. Loud hammering sounds emerge from under the vehicle, and all of us are convinced that this bus is never going to drive again. But, despite their simple tools, these people are master mechanics, and after about an hour’s work the drive shaft is back in place. We can now continue our journey, which fortunately passes off without further mishap.

At dusk we reach Bhairawa, our goal for the night. We eat a simple meal and then turn in. A dormitory bed is included in the ticket price. Despite being exhausted, we have difficulty sleeping, as we are kept awake by mosquitos, or by talking fellow travellers. 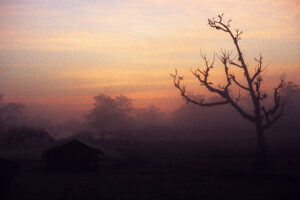 Early morning in the Terai. (Photo copyright © by Kaj Halberg)
Lack of seats
The following morning, after clearing customs, we must board an Indian bus to continue our journey to Varanasi. Altogether fourteen Westerners are handed their tickets and enter the bus, only to discover that it is already packed with Tibetan pilgrims, bound for Sarnath.

Sarnath is the site near Varanasi, where Siddharta Gautama gave his first lecture after obtaining nirvana beneath a pipal tree (Ficus religiosa), near the town of Gaya, c. 528 B.C. when he began lecturing, his new followers called him The Buddha, meaning ‘The Enlightened One’. You may read more about the Buddha and Buddhism on the page Religion: Buddhism, whereas the pipal tree is described on the page Plants: Pipal and banyan – two sacred fig trees.

Pilgrims or not – we have paid for our seats and would like to occupy them. We get hold of the bus conductor, a diminutive, bow-legged man with a protruding lower jaw, in which one tooth is missing. At once, he is dubbed ‘The Ogre’ by Jette. He tries his best to persuade some of the Tibetans to leave on the next bus, but they have all been given seats as well and are not at all inclined to give them up.

Finally, after a two-hour delay, we leave, but five of the Westerners are still without a seat. ‘The Ogre’ promises them that once we’re out of town (where there is no police), they will be allowed to sit on the roof top – not at all a bad place. 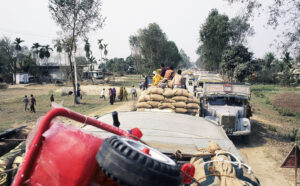 ‘The Ogre’ promised the tourists that once we were out of town, they would be allowed to sit on the roof top – not at all a bad place. (Photo copyright © by Kaj Halberg)
“The cyclist is dead!”
Our bus now travels along briskly, as we have to catch up on our delay. We haven’t gone very far, however, before we hear an ominous crashing sound. As it turns out, the bus has hit a cyclist, who is lying on the ground, bleeding. Observing this, the driver is seized with panic and starts racing along the road, not daring to stop. Fate has it, that in the next town a policeman enters the bus. He is not aware of the incident, but one of the passengers blurts out what has happened, and rumours have it that the cyclist is dead.

Horror-stricken, the driver starts the bus engine and moves on, leaving the police officer, ‘The Ogre’, and about ten passengers behind. They all run like mad to catch up with the bus. After approximately half a mile, the bus comes to a stop, whereupon the driver descends, running across a field at a tremendous speed. Tongues hanging out of their mouth, ‘The Ogre’ and the passengers, who were left behind, arrive and jump into the bus, but as we are now without a driver, their effort is in vain.

For about half an hour absolutely nothing happens. As usual in India, a large crowd gathers around the bus to stare. I don’t think that any other people in the world can stare as the Indians!

Finally, one of the passengers occupies the driver’s seat, and we return to the police station. As it turns out, our driver has been arrested by the police, who are now questioning him. The bleeding cyclist comes along, pulling his bicycle. The police officers, however, show a complete lack of interest in him, being much more interested in how much ‘The Ogre’ is willing to pay them to get his driver back. After two hours of negotiations, they come to an agreement, but, unfortunately, I’m too far away to see how much money ‘The Ogre’ is handing over.

Now we can proceed. After Gorakhpur, the standing passengers want to climb onto the roof top, as promised by ‘The Ogre’ back at the border. However, he requests them to wait a bit, because, he says, there are too many police officers around.

Then, in some town, he suddenly disappears – and we never see him again. The poor Westerners now have to stay inside the bus, as ‘The Ogre’ was the only person to promise them a roof top site. In his own shrewd way, he tricked the passengers to pay for seats they will never get. We share our cramped seats with some of them, while others take their seat among a huge pile of luggage.

“The hotel has burned down!”
Darkness is falling. After several stops to eat, or to unload passengers, we reach Varanasi at 10 p.m. – six hours late.

We ask a rickshaw driver to bring us to a hotel, which someone has recommended to us.

“Sorry, Sir, that hotel has just burned down, but I know another hotel, very nice, only 30 Rupees.”

We did hear rumours about this trick, used by Varanasi rickshaw drivers to persuade tourists to choose a hotel, in which the driver will get a commission. However, we are far too tired to argue, so we accept his offer.

At the hotel we are informed that, unfortunately, they have no more rooms for 30 Rupees (in fact, they never had), but “a very nice one, with attached hot shower, for 60 Rupees.”

I get mad and tell them a piece of my mind, and, ultimately, we get a 40-Rupees room, without shower, for 30 Rupees.