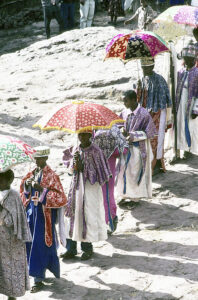 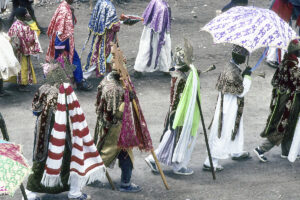 Procession of priests during the festival of Timkat. Many carry colourful umbrellas as a protection against the fierce sunshine. (Photos copyright © by Kaj Halberg)
“They are a poor civil people with miserable clothes, and they come into the water uncovered, a black tall people with thick matted locks, which from their birth they neither cut nor comb, so that they wear their hair like a lump of wool, and they carry pointed oiled sticks, with which they scratch the vermin which crawl beneath, because they cannot reach their scalps with their fingers, and scratching their heads is their sole occupation.”
Portuguese mission to Ethiopia in 1520, searching for the legendary King of Kings, Prester John.
Accompanied by three Danish friends, Uffe Gjøl Sørensen, Jørgen Bech, and Erling Krabbe, I fly from Addis Ababa to the small town Lalibela, situated in the northern highlands of Ethiopia. We have planned our trip, so that our arrival coincides with the first day of an important religious festival, Timkat, which is celebrated with vigour in Ethiopia every year in January.
The Orthodox Tewahedo Church
The predominant religion in Ethiopia is an ancient, orthodox form of Christianity, the Ethiopian Tewahedo Church, which is the largest of all Oriental Orthodox Churches, with 40-45 million followers.

This group of churches also comprise the Eritrean Tewahedo Church, the Coptic Church of Alexandria, the Armenian Apostolic Church, the Syriac Orthodox Church, and the Malankara Church of India.

Until 1959, the Ethiopian Tewahedo Church was administered by the Coptic Church of Alexandria, but was then granted its own patriarch by Cyril VI, who, besides being Coptic Pope of Alexandria, was also Patriarch of all Africa.

Tewahedo means ‘unified’. Contrary to the belief of the Roman Catholic, the Greek Orthodox, the Russian Orthodox, the Anglican, the Lutheran, and most other Protestant Churches, that Christ has two natures, a divine and a human, the Tewahedo and other Oriental Orthodox Churches believe in one single unified Nature of Christ, meaning that a unification of the divine and human natures of Christ into one is essential to accomplish the divine salvation of humankind. (Source: en.wikipedia.org/wiki/Ethiopian_Orthodox_Tewahedo_Church)

During one of the Timkat ceremonies, the Tabot is wrapped in an ornate cloth and carried in a procession of priests. It represents the manifestation of Jesus as the Messiah, when he approached John the Baptist to be baptized. Around 2 a.m., the Tabot is carried to a nearby stream or pool, where a ritual cleansing of it is performed. Later, water is sprinkled on the participants of the procession. Some also immerse themselves, thus symbolically renewing their baptismal vows. 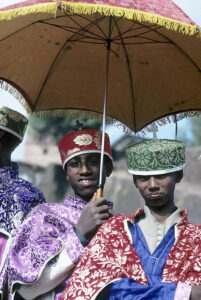 Ethiopian Tewahedo priests in Lalibela during Timkat. (Photo copyright © by Kaj Halberg)
The festival begins
In Lalibela, we try to locate vacant hotel rooms, but during the festival everything is fully booked. The staff in one of the hotels, however, permits us to pitch our tents on their lawn.

Numerous priests are gathered, all wearing silk and cotton garments down to their ankles. Many also carry colourful umbrellas as a protection against the fierce sunshine. Occasionally, fantastic rolls of drums can be heard from the centre of the group of priests, accompanied by the blowing of horns.

Thousands of villagers and white-clad pilgrims are gathered on the slopes along the main path, some with a yellow cross woven or sewed on to their back.

A long procession of priests now marches past, divided into sub-groups, one from each of the churches in Lalibela and its surroundings. At the rear end of each group, white-clad young priests are dancing and singing, accompanied by rolls of drums and fanfares from brass horns. The priests are followed by hundreds of pilgrims and spectators. 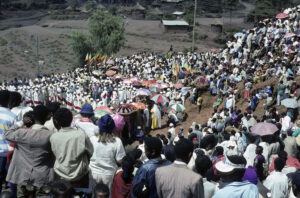 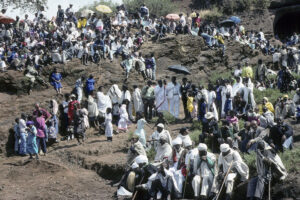 On the slopes, thousands of villagers and white-clad pilgrims were gathered. (Photos copyright © by Kaj Halberg) 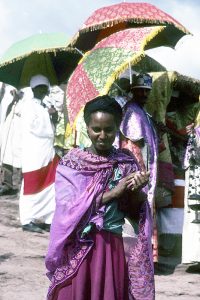 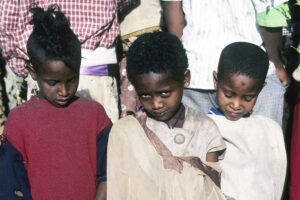 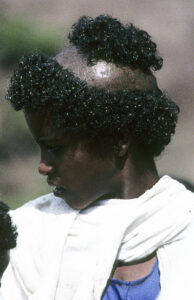 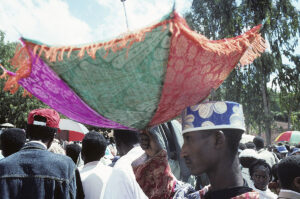 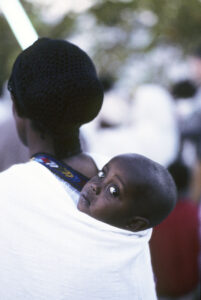 ”What does he want?” this child on his mother’s back is probably thinking. (Photo copyright © by Kaj Halberg)
Birdlife in Lalibela
During the ceremony, dark clouds have gathered, bringing lightning and thunder, followed by pouring rain.

We seek shelter in the hotel lobby, from where we can study the bird life in the hotel garden, which includes speckled pigeon (Columba guinea), the endemic banded barbet (Lybius undatus), the strange speckled mousebird (Colius striatus), which climbs about in the bushes with incredible agility, and an Ethiopian thrush (Psophocichla simensis), searching for worms on the lawn, similar to the European blackbird (Turdus merula) back home.

A yellow-billed kite (Milvus aegyptius) is resting on barbwire near the hotel. This bird was formerly regarded as a subspecies of the widespread black kite (M. migrans). Other observed birds in the neighbourhood include fan-tailed raven (Corvus rhipidurus), Swainson’s sparrow (Passer swainsonii), and African citril (Crithagra citrinelloides).

Throughout the night, the festival continues with speeches and chanting. The noise is incredible, as the speeches are transmitted through numerous loudspeakers. Obviously, the priests are of the opinion that everybody should have the pleasure of listening to them. All night long, people come and go in the darkness. 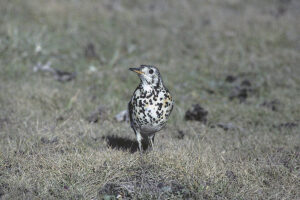 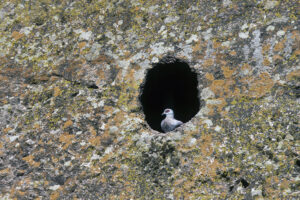 The speckled pigeon is very common in Ethiopia. This one is sitting in a window opening in one of Lalibela’s rock churches. This bird is distributed in the major part of sub-Saharan Africa, but avoids rainforest. (Photo copyright © by Kaj Halberg) 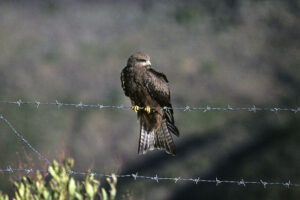 This yellow-billed kite is an immature bird, with black markings on the bill. Adult birds have bright yellow bills. (Photo copyright © by Kaj Halberg) 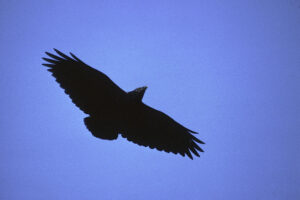 The fan-tailed raven has an incredibly short tail. It is a widespread bird, found in Israel, Jordan, the entire Arabian Peninsula, and the major part of north-eastern Africa. (Photo copyright © by Kaj Halberg) 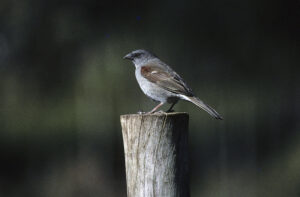 Swainson’s sparrow occurs in north-eastern Africa, mainly in the Ethiopian Highlands. By some authorities, it is regarded as a subspecies of the grey-headed sparrow (Passer griseus). (Photo copyright © by Kaj Halberg) 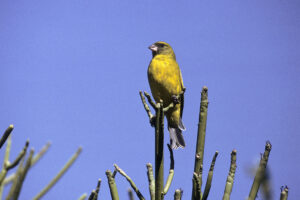 The African citril lives in the highlands of Eritrea and Ethiopia, with a disjunct population in south-western Kenya. It was formerly placed in the genus Serinus and was considered conspecific with the southern citril (C. hyposticta). (Photo copyright © by Kaj Halberg)
Twelve stone churches
Lalibela houses a unique array of churches and monasteries, dating back to the 11th and 12th centuries – Beit Maryam, Selassie’s Chapel, The Tomb of Adam, and Mashal Chapel, to mention but a few.

We pay a visit to some of the churches, where we are welcomed by their priests. The interior walls are decorated with carvings and murals. The churches contain a large number of archaic artefacts, including splendid crosses in gold and silver.

One of the murals depicts St. George, a Roman soldier, who was executed around 303 for his Christian belief. He since became the patron saint for farmers, knights, and horsemen. The name George is from the Greek georgos (‘farmer’). A famous legend relates that St. George killed a dragon, which held a princess captive. 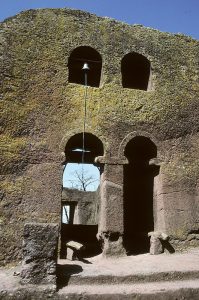 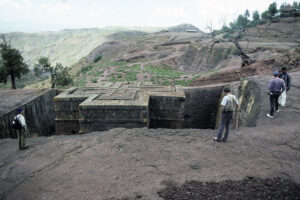 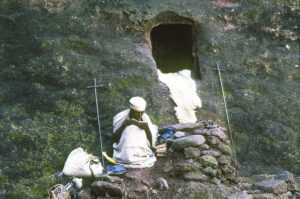 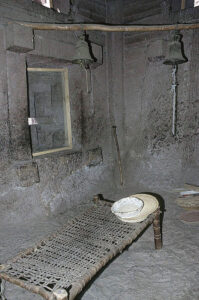 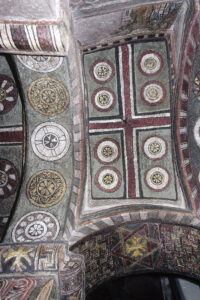 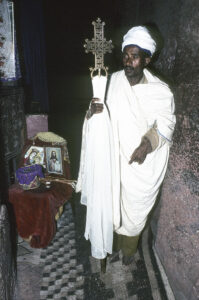 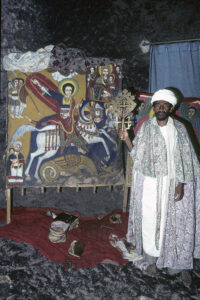 Displaying a golden cross, this priest is standing in front of a painting, depicting Saint George, killing the dragon. (Photo copyright © by Kaj Halberg)
Good, strong coffee
On this day, the most important ceremony of Timkat has already taken place, when a long procession of priests, very early in the morning, followed by thousands of pilgrims, carried the Tabot to a small river, in which a ritual cleansing of The Ark was performed. 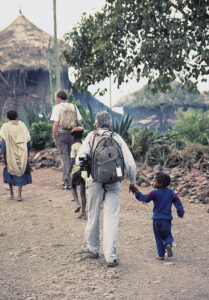 Two of our guide’s younger brothers accompanied us the last bit of the way. (Photo Uffe Gjøl Sørensen, copyright © by Kaj Halberg) 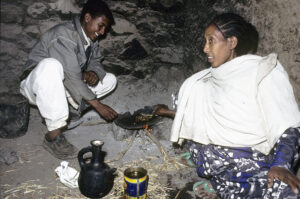