When the mu oil tree is flowering 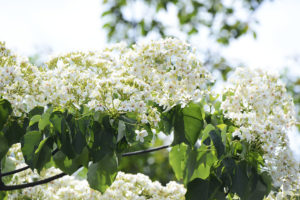 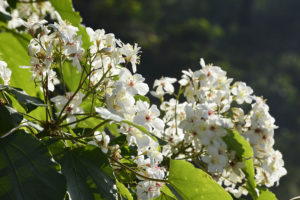 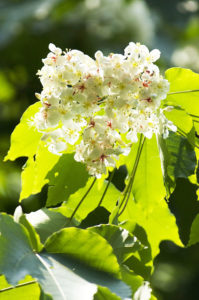 Inflorescences of the mu oil tree (Vernicia montana). (Photos copyright © by Kaj Halberg)
In Chinese, the mu oil tree (Vernicia montana, formerly named Aleurites montana or A. cordata), is called 木油桐 (pronounced ‘mooh yow tong’), literally meaning ‘wood oil tree’ This tree is valued for its seed oil, called abrasin oil or Chinese wood oil. Because of its similarity to tong oil, which is extracted from a near relative, the tong oil tree (Vernicia fordii), the oils from the two species are often treated together as ‘tong oil’, and in everyday speech, both species are called ‘tong oil tree’.

Traditionally, this oil is utilized to manufacture paints, Chinese black ink, and lamp oil, for waterproofing cloth and paper, and for caulking and painting ships. It was also formerly used for insulating electric wires. (Source: Protabase – Plant Resources of Tropical Africa – prota.org)

In the 1200s, Venetian explorer Marco Polo wrote: “The Chinese take lime and chopped hemp, and these they knead together with a certain wood-oil; and when the three are thoroughly amalgamated they hold like any glue, and with this mixture they paint their ships. The wood-oil is derived from a tree called tong-shu.”

In Chinese traditional medicine, mu oil tree is used as an emetic and an anti-inflammatory, and as a vermifuge. The seed oil is a strong purgative and is also used for treatment of wounds, burns, and parasitic skin diseases. It is a component of nearly all Chinese plasters. An extract from the fruit is antibacterial.

All parts of the mu oil tree are poisonous, including fruit and seeds. Ingesting the seeds causes severe abdominal cramps, vomiting and diarrhoea. Animals, e.g. cattle, horses, and chickens, which have eaten the leaves or seed cake, may get bleeding diarrhea, and in severe cases they become emaciated and die.

In Taiwan, in late April or early May, the mu oil tree displays an abundance of pretty white flowers, and as the species is very common, mountain slopes at lower altitudes may sometimes appear almost white – a sight to behold!

Two locations with prominent mu flower display are around Sanyi, and on the slopes east of Puli, both in western Taiwan. The slightest puff of wind makes mu flowers fall from the trees by the hundreds, gradually covering the ground as a delicate white carpet. 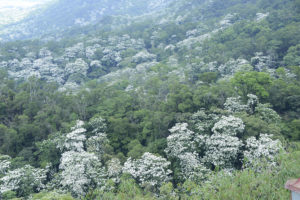 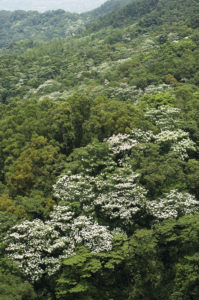 The filaments of the mu oil tree may be red or yellow, even in the same inflorescence. (Photo copyright © by Kaj Halberg) 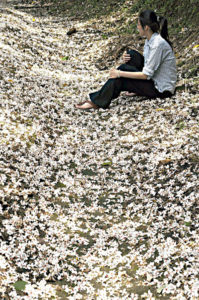 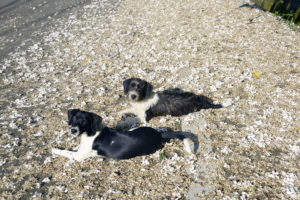 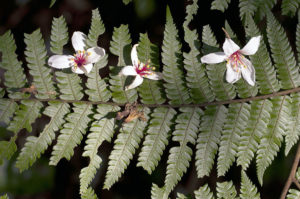 These mu flowers have landed on a fern leaf. (Photo copyright © by Kaj Halberg) 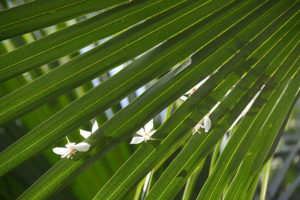 In this picture, falling mu flowers have been caught in the leaf of a fan palm. (Photo copyright © by Kaj Halberg) 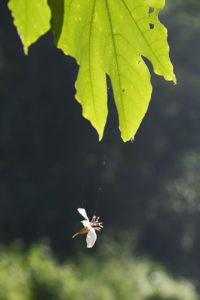 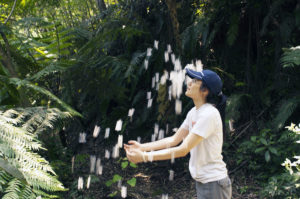