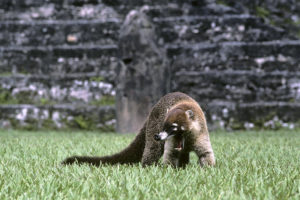 The white-nosed coati (Nasua narica) is common among the Mayan ruins of Tikal, Guatemala. (Photo copyright © by Kaj Halberg)
The four species of coatis, which are relatives of the more familiar raccoon (Procyon lotor), are characterized by their long, highly mobile snout. Indeed, their generic name Nasua is derived from the Latin nasus, meaning ’nose’.

The brown coati (Nasua nasua) is distributed in rainforests in large parts of South America, whereas the white-nosed coati (Nasua narica) lives in a variety of habitats, from desert to rain forest, between Arizona in the north and Ecuador in the south. The island coati (Nasua nelsoni) is restricted to the island of Cozumel in southern Mexico, and the fourth species, the mountain coati (Nasuella olivacea), lives in montane forests of Venezuela, Columbia, and Ecuador. The latter two species are smaller than the brown and white-nosed coatis.

Living in large bands
Years ago, scientists were convinced that there was yet another species of coati, called coatimundi, a local tribal word, which means ’lone coati’. Most coatis are very social, living in bands counting up to 30 animals. But adult males often live alone, and this was the cause of the confusion concerning a fifth species.

A band of coatis consists of females with offspring. Previously, biologists presumed that all females in a band were blood-related, because a female will often take care of the offspring of another female, allowing her to feed freely. However, research has shown that not all females in a group are blood-related. Some unrelated females simply form a friendship, and these friends are so well trusted that a female will often let her friend take care of her young, while she is out feeding. This behaviour also allows a female to bring her young into the band from her nest much earlier than she could otherwise have done, because other females will guard her young. Coati bands may comprise up to 30 animals. (Photo copyright © by Kaj Halberg) 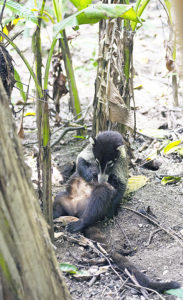 Grooming white-nosed coati, Parque Nacional Corcovado, Costa Rica. (Photo copyright © by Kaj Halberg)
Cannibalism
For a short period of time each year, a male coati will join a band to mate with as many females as possible. But as males are known to often kill and eat young coatis, the females soon become aggressive and chase him away from the band. When a mother brings her newborn young into a band, the male will re-join the group for a short period, sniffing all the young he has fathered, thus being able to recognize them later and avoid eating his own offspring!

When walking or running, coatis hold their very long, banded tail erect. They are excellent climbers, wrapping their tail around branches and twigs for balance. Coatis can even run down a tree trunk, head first. They eat a variety of food, such as fruits, eggs of turtles, lizards and birds, and small animals like insects, worms, scorpions, crabs etc. 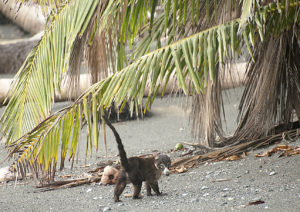 Coatis often feed on beaches, as here in Parque Nacional Corcovado. (Photo copyright © by Kaj Halberg)
Coatis and tourists
In popular tourist areas, coatis become very confiding and will often beg food from tourists – or steal it out of their bags, if they are unaware. Coatis also steal fruit from plantations, and for this reason Mexicans call them chulos (’bandits’). In Tikal, Guatemala, my fellow traveller, Lotte Møller Pedersen, has company of a white-nosed coati. (Photo copyright © by Kaj Halberg)
Once I was sitting with other travellers on one of the tall ruined Mayan pyramids in Tikal, waiting for the sun to set. A white-nosed coati was ‘nosing’ around among us, looking for tidbits. One of the tourists had placed his daypack on the ground beside him, and it must have had an interesting smell, because suddenly the coati grabbed it in its mouth and ran down the slope as fast as it could. The tourist sprinted after the coati, shouting. Luckily, he managed to retrieve his bag. Thirty seconds after this picture was taken, the coati was sprinting down the slope, carrying a bag in its mouth. (Photo copyright © by Kaj Halberg)
(Uploaded February 2016)
(Latest update May 2020)
Text & photographs © Kaj Halberg, 2015. All rights reserved. Contact: respectnature108@gmail.com