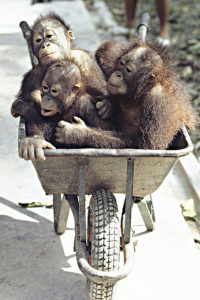 The orphaned orangutans were not too keen on walking into the forest, but they loved being driven out there in a wheelbarrow. (Photo copyright © by Kaj Halberg)
We are five Danes who have arranged to meet in Kota Kinabalu, the capital of Sabah, the northernmost province of Borneo. My companion Jette Wistoft and I arrive from Sarawak over land, whereas Niels Peter Andreasen, Vagn Lundbye, and Ulrikka Gernes fly from Denmark, via Singapore.
The threatened orangutans
Orangutans are closely related to humans, a fact which is also seen from their name, meaning ‘Forest Man’ in the Malay, from orang (’Man’) and utan (’forest’).

Formerly, orangutans were regarded as a single species, Pongo pygmaeus, confined to rainforests of Sumatra and Borneo. Lately, however, it has been split into three separate species, the Bornean orangutan (P. pygmaeus), found in Borneo, the Sumatran orangutan (P. abelii), which is restricted to northern Sumatra, and the Tapanuli orangutan (P. tapanuliensis), which lives in an area of just 1,500 km2 in central Sumatra. Read more about these species, and many other species of apes and monkeys, on the page Animals: Monkeys and apes.

During the last century, orangutans have declined drastically and are now in danger of extinction. The main reason for this decline is habitat destruction, as huge areas of rainforest have been cleared by the timber industry and converted into oil palm plantations or farmland. Another reason is that poachers shoot female orangutans to get hold of their young, which are sold to zoos or others.

In Borneo, a number of rehabilitation centres for orangutans have been established. At these centres, orphaned young orangutans, which have been confiscated from poachers, are trained to live in the forest and then released into safe areas, such as national parks. 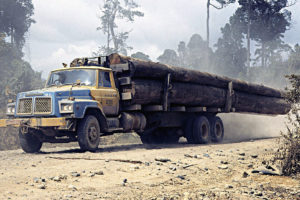 Truck, transporting logs in Sabah. (Photo copyright © by Kaj Halberg)
Adoption and electric shock
From Kota Kinabalu, we travel by bus to the Sepilok Orangutan Rehabilitation Centre, near the town of Sandakan. The leader, Mr. Patrick Andau, receives us very courteously, and when he learns that we have come here to describe the efforts of the centre through articles in Danish newspapers and magazines, and through lectures, he kindly invites us to stay in an empty house, belonging to the centre. We can also come and go in the sanctuary, as we please.

Accompanied by staff members, we walk around the area, while they explain the purpose of the centre. Besides orangutans, other confiscated animals are also undergoing quarantine here, until they are ready to be released at a suitable location, including a young sun bear (Helarctos malayanus), which loves to lick your fingers, a young clouded leopard (Neofelis nebulosa), southern pig-tailed macaques (Macaca nemestrina), southern slow lorises (Nycticebus coucang), a reticulated python (Python reticulatus), and paradise tree snakes (Chrysopelea paradisi). The latter belong to a group of so-called ‘flying snakes’, which move through the trees incredibly fast, throwing themselves through the air, from one branch to the next.

Naturally, the most important animal here is the orangutan. At this time, there are about ten confiscated orphans at the centre.

Shortly after our arrival, we encounter Grace, a 28-year-old female, who lives in the forest around the centre. She is hanging by her arms on the fence, which surrounds the centre, with five-year-old Julia, whom she adopted by breaking into a cage. Occasionally, they come to the centre to get bananas.

Grace’s eight-year-old daughter Juliana keeps them company. She lost an arm, when she climbed an electric pole and got a shock. Her left arm became lame and had to be amputated. 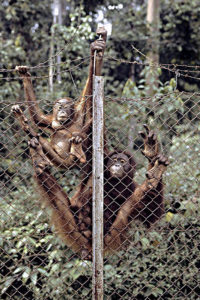 Grace with five-year-old Julia, whom she adopted by breaking into a cage. (Photo copyright © by Kaj Halberg) 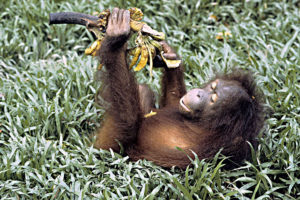 Juliana, enjoying a banana. She lost an arm, when she climbed a pole and got an electric shock. (Photo copyright © by Kaj Halberg) 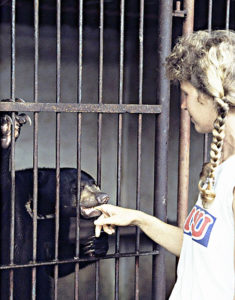 Jette with a young sun bear that loved to lick fingers. (Photo copyright © by Kaj Halberg)
Crowing rooster
It is now late in the day, and we head for the house we are going to stay in, 4 km from the centre. Luckily, we are able to get a lift there. As it turns out, the house isn’t very well equipped, as there is no light and no kitchen utensils. A kind neighbour lends us a kerosene lamp as well as a cooking stove and kitchen utensils, which allows us to cook simple meals. As there are no beds and mattresses, we sleep on the floor in our sleeping bags.

The following morning, Vagn complains that a rooster started crowing in the middle of the night, right beneath the floor. The rest of us must have been very tired indeed, as we heard nothing.

Life of the orphans
During the following days, we join the staff in their efforts to train the orphans how to live an independent life in the rainforest. The young orangutans are brought into the forest, where they must learn to climb trees, and their trainers show them which plant species can be eaten, and which ones they must avoid. The orphans are not too keen on walking into the forest, but they love being driven out there in a wheelbarrow.

The greatest challenge, however, is to make the orphans associate in a natural way with other orangutans. In the forest, the mother will teach her young everything, but these orphans have no mother, as the mothers were shot illegally by poachers, who wanted to sell the young to a zoo or elsewhere. If an orphan is detected by the authorities, it is confiscated and sent to a rehabilitation centre.

Having no mother, the orphans often attach themselves closely to one another – or to their trainer. The latter, however, is not encouraged, as the young orangutans are not supposed to be too closely attached to people. But this is an almost impossible task, as they have an enormous need of physical contact. To embrace a small orangutan, clinging to you with arms and legs, is an unbelievably lovely experience.

Some of the larger orphans are very naughty. They get hold of our backpacks or camera straps, pulling with immense force. They won’t let go before their trainer hits the ground in front of them with a stick. They then fall to the ground, rolling and whimpering. 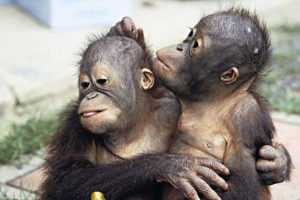 Lacking a mother, orphaned orangutans often become much attached to one another. (Photo copyright © by Kaj Halberg) 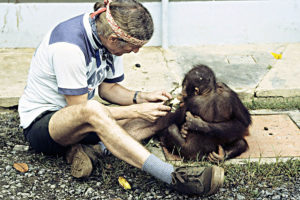 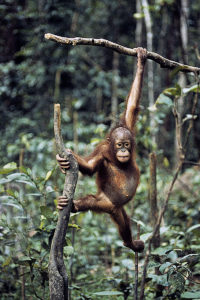 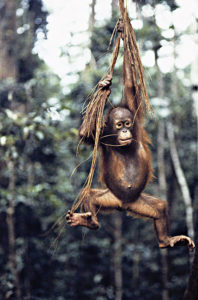 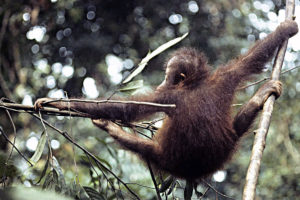 The young orangutans learn to swing from branch to branch. (Photos copyright © by Kaj Halberg) 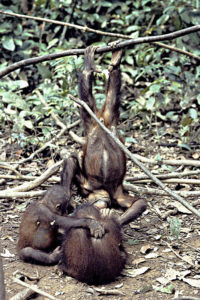 “This is a secret! Don’t tell anybody!” – These orphans are having a meeting in the forest. (Photo copyright © by Kaj Halberg)
Wildlife around the centre
Around Sepilok is a small reserve with wonderful primary rainforest. When we are not occupied with the orangutans, we often make trips into this forest, where tree shrews of the genus Tupaia are fairly common, and we hear calling sambar deer (Cervus unicolor) and barking deer (Muntiacus muntjak). We also observe a wild binturong (Arctictis binturong), which often comes to the centre to eat bananas.

During a night trip into the forest we hear many strange sounds but are not able to spot their source. Along the trail, we find numerous luminous fungi, glowing in the dark. 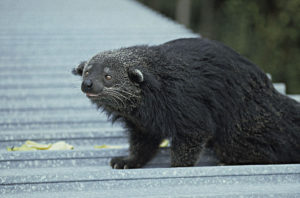 This wild binturong often came to the centre to feed on bananas. (Photo copyright © by Kaj Halberg) 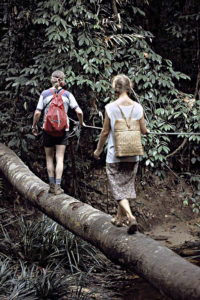 Vagn and Jette in the rainforest, balancing on a log across a stream. (Photo copyright © by Kaj Halberg)
”Shower of blessing!”
We also join the staff on longer trips into the rainforest. In the trees, several platforms have been constructed, where young orangutans, which are partly able to fend for themselves, can supply their wild diet with milk and bananas.

One day, on our way towards the platforms, we are accompanied by a group of American tourists, who are fairly boisterous, but very hearty indeed. Rain had fallen the previous night, causing leeches to be quite a nuisance. And when crossing the small streams on slippery logs, we must be very cautious indeed, even with ropes to hold on to.

Some of the American ladies have a hard time, as they are wearing high-heeled shoes. An elderly lady, wearing a sophisticated straw hat, turns around to warn us.

”Watch the leeches!” she yells, at the same moment slipping on the log and falling into the small stream. Fortunately, she is not at all hurt, and, despite her ill-luck, she’s in a surprisingly good mood.

When we arrive at the platforms, seven young orangutans are already gathered here, stuffing themselves with milk and bananas. One of them is a charming devil, approaching the edge of the platform to gaze down at the American tourists. He makes faces at them, then proceeds to urinate on the ladies’ fine straw hats, causing them to jump about, screaming. One of the gentlemen just laughs, remarking: ”A shower of blessing from above!”

We are quite sad, when the time has come for us to leave the orangutans and their trainers. As an appreciation of their exceptional goodwill and friendliness, Niels presents the staff with a small gift – a caricature drawing, depicting the five of us. 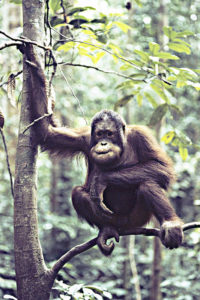 This young male has stuffed his mouth with mashed bananas. (Photo copyright © by Kaj Halberg) 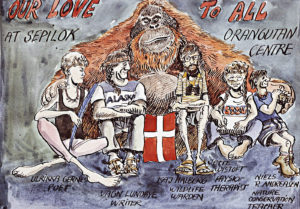