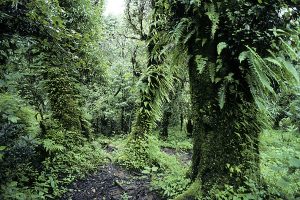 During the peak of the monsoon, this oak forest in the Rolwaling Valley, central Nepal, is incredibly lush, the great trees heavily laden with epiphytes such as mosses, ferns, and Begonia flowers. (Photo copyright © by Kaj Halberg) 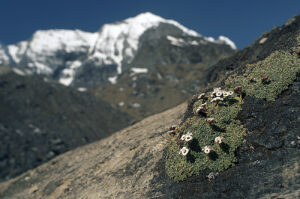 Contrasting sharply with the lushness in the picture above, this saxifrage, Saxifraga andersonii, grows on a barren rock in a high-altitude, alpine landscape around Annapurna Base Camp, central Nepal. As a means of protection against cold and evaporation, this plant forms compact cushions up to 10 cm across. (Photo copyright © by Kaj Halberg) 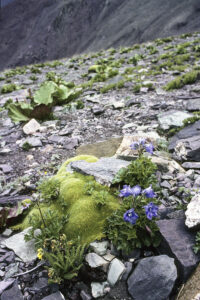 Rich vegetation on the Kongmaru La Pass (5274 m), Markha Valley, Ladakh, with green cushions of Thylacospermum caespitosum, the yellow-flowered Biebersteinia odora, a blue larkspur, Delphinium brunonianum, and an aster (Aster). In the background leaves of a rhubarb (Rheum). (Photo copyright © by Kaj Halberg) 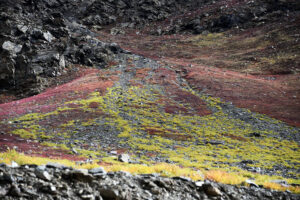 Rocky landscape near the Bara Lacha La Pass (c. 3900 m), Lahaul, Himachal Pradesh, showing red and yellow autumn foliage of two species of pinkweed, Bistorta affinis (red) and Koenigia tortuosa (yellow). (Photo copyright © by Kaj Halberg)
The word Himalaya is from the Sanskrit hima (‘snow’) and alaya (‘abode’), thus ‘The Abode of Snow’. The Himalaya consists of a long arch of gigantic mountains, stretching from northern Pakistan southeast to the northern tip of Myanmar – a distance of more than 2,500 km. In these mountains are the Earth’s largest concentration of very high peaks, fourteen of which reach an altitude of more than 8,000 m, whereas hundreds are more than 7,000 m high. (For comparison, the highest mountain outside Central Asia, Aconcagua in Argentina, is a mere 6,962 m.)

As a result of the great span in altitude and precipitation – besides various other factors such as micro-climate and soil composition – flora and fauna of the Himalaya are indeed diverse. In these mountains, two bio-geographical regions meet. In most areas, flora and fauna from the Indo-Malayan Region, which includes the Indian Subcontinent and Southeast Asia, dominate, but in northern Pakistan, Kashmir, Ladakh, and in areas of far northern Nepal and Bhutan at altitudes above c. 3,500 m, there is a large element of species from the Palaearctic Region, which includes Central and West Asia.

The Himalaya is home to an overwhelming abundance of plant species. In Nepal alone, c. 6,500 species of seed plants have been found, and the number in the entire mountain range exceeds 10,000, of which about 4,000 are endemic to the area. To this number, add hundreds of species of ferns, clubmosses, mosses, and lichens.

When the monsoon has passed over the Himalaya from the south, almost all its humidity has already fallen as rain. Thus, the Tibetan Plateau north of the mountains receives very little rainfall. In many places, the annual mean precipitation is less than 100 mm, most of which falls as snow in the winter. For this reason, the major part of the landscape is dry and rather barren, with lush and green areas mainly found along rivers and around the numerous lakes of the region.

My encounters with the rich and varied plant life in a number of Himalayan locations are related on the page Plant hunting in the Himalaya.

Because of the huge number of pictures, I have divided this page into three sub-pages:

3: Ranunculaceae to Zygophyllaceae, and ferns, lycopods, and lichens.

I am aware that lichens, strictly speaking, are not plants, but I include them anyway, as most people regard them as plants.

Acknowledgements
When describing the plants, I have relied heavily on two excellent books, Flowers of the Himalaya (Oxford University Press, 1984), written by Oleg Polunin and Adam Stainton, and Flora Simlensis. A Handbook of the Flowering Plants of Simla and the Neighbourhood (Thacker, Spink & Co., 1921), written by Sir Henry Collett. The former book is still available on the market, but, unfortunately, only a limited number of species in it are illustrated in colour.

The vast majority of the information on usage of plants has been borrowed from Narayan Manandhar’s delightful book Plants and People of Nepal (Timber Press, 2002). My sincerest thanks to Mr. Manandhar. Tibetan Medicinal Plants, by T.J. Tsarong, published by Tibetan Medical Publications, India, 1994, has also been valuable.

Regarding the etymology, I have relied on the website Wiktionary, and on J. Corneliuson, Växternas namn. Vetenskapliga växtnamns etymologi. Språkligt ursprung och kulturell bakgrund, published by Wahlström & Widstrand, 1997 (in Swedish).

I am also indebted to my friend Ajai Saxena, who has provided more than two dozen pictures. Together, we have made several botanical trips in the Himalaya, sometimes accompanied by Ajai’s wife Madhu. 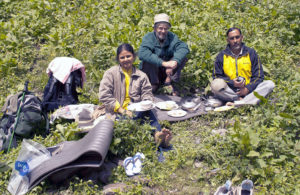