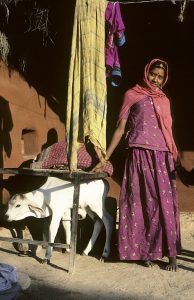 Bhiya Ram’s slender and graceful daughter in the courtyard with a zebu calf. (Photo copyright © by Kaj Halberg)
Near Bhiya Ram’s farm, a bearded Bishnoi man, dressed in simple white garments and wearing a white turban, is leading his camels to a waterhole, where they can quench their thirst.

Already gathered here are a group of slender and graceful women, wearing colourful local dresses, and adorned with rings of silver and gold around their arms and ankles, in the ear lobes, and on fingers and toes. Talking and laughing, their beautiful teeth are flashing white. When they have filled their clay jars or shining brass jars with water, they return to their home.

Elsewhere at the waterhole, numerous splendid peacocks (Pavo cristatus) strut about, the males displaying their gorgeous tail to impress the females. These, however, show a complete lack of interest.

In a fallow field nearby, a herdsman is singing while seeing to it that his cattle don’t graze in the bright green fields of millet. At the same time, he keeps an eye on an approaching herd of blackbuck (Antilope cervicapra), to make sure that they won’t eat too many of the crops.

This species is described in depth on the page Travel episodes – India 1979: Hunting blackbuck with camera. 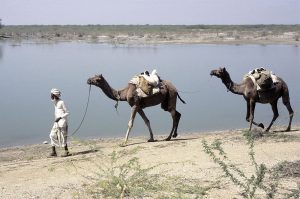 A bearded Bishnoi man was leading his camels down to a waterhole. (Photo copyright © by Kaj Halberg) 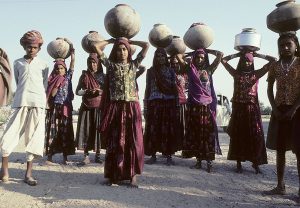 At the pond, colourful village women filled their jars with water. (Photo copyright © by Kaj Halberg)

The herder kept an eye on an approaching herd of blackbuck, to make sure that they wouldn’t eat too many of the crops. (Photo copyright © by Kaj Halberg)
Actively protecting wildlife
About 250 years ago, according to legend, the Maharaja of Jodhpur, Rajasthan, ordered his men to cut down a growth of khejari trees (Prosopis cineraria), to be used as fuel to produce lime for the great Mehrangarh Fort.

The khejari tree is sacred to the Bishnoi people, as its fruits are edible and highly nutritious. For this reason, 363 Bishnoi men, women, and children tried to prevent the felling of the trees by embracing them, but they were all killed by the Maharaja’s soldiers. When this action was related to the Maharaja, he was devastated, ordering his men to spare the Bishnoi’s khejari trees in the future. To commemorate the event, a temple was built in a small village, which today bears the name of Khejarli.

The word bishnoi is from the Hindi: bis (twenty) and nau (nine). This religious movement was initiated by Ghambe-ji, who lived in the beginning of the 16th Century. He belonged to the second highest Hindu caste, kshatriya (warriors), but abandoned Hinduism to preach his own set of rules, 29 in all, the most important of which were non-violence and vegetarianism. Many people joined this new religion.

Initially, anybody could join the movement, but today you are born into the Bishnoi caste, most of whom live in Rajasthan, in the vicinity of the city of Jodhpur.

An important rule among the Bishnoi is that no wild animal should be killed – even if they feed on your crops. Bishnoi’s actively protect wild animals against poachers, and on several occasions angry Bishnoi men have beaten up poachers and chased them out of their region.

Thanks to this protection by the Bishnoi, a threatened species like the blackbuck has found a refuge in their area, in which you may also encounter many Gujarat gazelles (Gazella christii), or chinkara, and nilgai antelope (Boselaphus tragocamelus). In Hindi, nil means ‘blue’ and gai ‘bull’. This antelope is also protected by the Hindus due to its similarity to the sacred cow.

The Bishnoi also protect trees, because they provide shade, and timber for house construction. The event with the embracement of the khejari trees at Jodhpur was a source of inspiration for a grassroot movement, Chipko Andolan (‘Embrace Movement’), which was founded in 1979 in the Kumaon Hills, Uttarakhand.

In this region, local politicians issued a permit for a timber company to fell all trees in an area, in which local villagers a month earlier had been denied a permit to cut wood for their daily need. Many of the village women were furious and, spontaneously, went into the forest to embrace the trees, thus preventing the lumber jacks from felling the trees. This action spread to nearby villages, and the timber company retreated from the area. 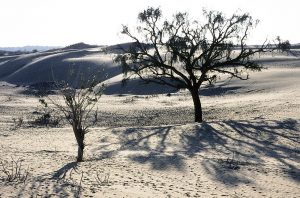 The khejari tree is sacred to the Bishnoi people, who eat its nutritious fruits. (Photo copyright © by Kaj Halberg)
Visiting farmer Bhiya Ram
If you respect the simple rules of conduct of the Bishnoi, they welcome you into their villages. My companion Søren Lauridsen and I visit a white-clad farmer, Bhiya Ram, who lives on a small farm with his wife and some of his sons, daughters, and daughters-in-law. The walls of the buildings are mud, mixed with cow dung, which will deter flies and other pests. Before this mixture dried, the women made fine patterns in the surface, using their fingers.

In the courtyard, several types of crops are spread out on mats to dry in the sun, including seed pods of three wild types of legumes, khejari, gowar, and khair acacia (Senegalia catechu), two types of lentils, millet, jowar (Sorghum bicolor), cucumber, and sesame.

An open-air kitchen is situated in a corner of the courtyard, where Bhiya Ram’s wife and a daughter-in-law are busy cooking. Soon we are served a delicious meal of lentils and other pulses, cooked with dahi (yoghurt), ghee (clarified butter), and chili fruits, which have been crushed on a flat, smooth stone with a stone roll. With the meal comes chapatis (pancake-shaped loaves), made from coarse millet flour.

Bhiya Ram and his wife outside their farm near Jodhpur. (Photo copyright © by Kaj Halberg)

Bhiya Ram, showing some of his crops: The blackish, dried seed pods to the right are from two legumes, khejari and gowar, the pale seeds below are jowar, the black seeds to the left are khair, the green and brown seeds are lentils, the small pale seeds are millet, and the lumps near him are dried cucumber. (Photo copyright © by Kaj Halberg)

A daughter-in-law demonstrates how to make millet flour by grinding the crop between two stones. (Photo copyright © by Kaj Halberg)

Bhiya Ram’s wife, mixing millet dough to make chapatis. By pulling alternately at the two ends of a rope, tied to a stick, she is able to stir very fast. (Photo copyright © by Kaj Halberg)
Marriage customs among the Bishnoi
Bhiya Ram relates the marriage customs among his people. A wedding is a very important social event, and often up to 400 or 500 guests are invited. This is of course very expensive, so brothers and cousins try to get their children married at the same time, as they have many relatives in common.

Nevertheless, a wedding can only take place after a year of plenty, when heavy rain has fallen, and crops are plentiful. The party lasts three days, during which the guests are served an abundance of food and tea, and entertainment is delivered by local musicians.

Marriages are arranged by the parents, who make the agreement without consulting the involved children. Often, they are married at a very young age, four or five years, but the girl will stay with her parents until she is 15 to 18 years old. She will then move to her husband’s home, and this event is celebrated with a more modest party.

The girl’s family will inform the husband’s family, when time is ripe for her to move. The previous night, the boy as well as the girl will relax with their families, while the women sing love songs for them. These songs have a soothing effect on the young people, describing pleasures and sorrows of a marriage, and thus bride and groom are prepared for their future life.

The women also see to it that the expectations of the couple are not too high, thus making it easier for them to tolerate the shortcomings of their spouse. Indeed, divorces are very rare among the Bishnoi.

A daughter-in-law is mixing cow dung and clay to repair a house wall. (Photo copyright © by Kaj Halberg)
The only vice
After the meal, Bhiya Ram offers us opium. He grinds a brown lump of opium into powder in a fine silver mortar, adding a little water, and this mixture is filtered through a finely woven bag. He pours some of the brown water into his cupped hand, from where we suck it up. He then pours some of the liquid into our hand, whereupon he sucks it up.

This ritual is a bond of friendship among the Bishnoi, who do not smoke or drink alcohol, opium being their only vice.