This banyan (Ficus benghalensis) in the botanical garden of Kolkata, eastern India, is the largest of its kind in the world. Today, more than 1,825 of its aerial roots have grown into 25-metre-high trees. (Photo copyright © by Kaj Halberg)
In India and Nepal, villagers often plant two species of fig trees, banyan, or Bengal fig (Ficus benghalensis), and pipal, or sacred fig (F. religiosa), side by side, and as they grow larger, stone benches, called chotara, are constructed around their trunks. Here, in the shade of the trees, villagers meet to chat, and hard-working porters can have a well-deserved rest. According to one Nepalese legend, the two species are husband and wife, whereas another one claims that they are cousins.

Banyan has broadly oval leaves and long aerial roots, which hang down from the branches, often taking root and over time creating a ’forest’ of trunks, all of which are in fact a single individual. In the Botanical Garden in Kolkata (formerly Calcutta), eastern India, a 250-year-old banyan is the largest of its kind in the world (see picture above). The central mother-trunk was destroyed by a lightning in 1919 and has since rotted away, but about 1,825 of the aerial roots have grown into trees, which today are c. 25 m high, covering an area of more than 14,000 m2, equivalent to almost 1.5 ha (3.7 acres).

Pipal has broad, heart-shaped leaves, ending in a long, tapering point. This species belongs to a group of fig trees, called strangler figs. Most pipals begin their life as an epiphyte in another tree, the seed often sprouting in a pile of bird dung, delivered by the bird that ate the fig fruit. Over the years, aerial roots of the pipal wrap around the host tree, growing down to the ground, where they take root. Eventually, the host tree is strangled to death, and as its trunk decays, it leaves the pipal tree, standing as a hollow cylinder of aerial roots. Pipal also often grows in cracks on buildings, and, if allowed, its aerial roots will envelop the building and, over time, destroy it. 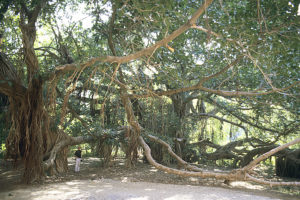 From larger banyan trees, numerous aerial roots hang down from the branches. Eventually, they take root – unless villagers cut them, which is often the case. This huge tree grows in Ranthambhor National Park, Rajasthan, India. Note the person to the left. (Photo copyright © by Kaj Halberg) 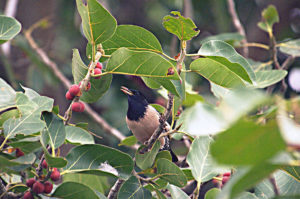 The leaves of banyan are thick and oval. The fruits of the two species are an important food item for various birds, in this case rosy starling (Sturnus roseus). (Photo copyright © by Kaj Halberg) 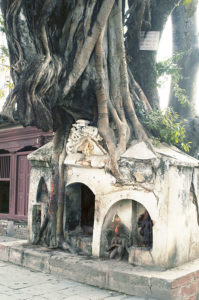 Pipal readily grows on buildings, as shown in this photograph from Kathmandu, Nepal, where its roots are destroying a small Hindu shrine. (Photo copyright © by Kaj Halberg) 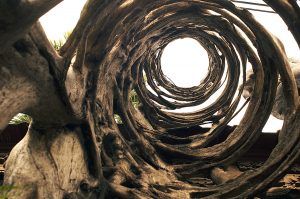 Over the years, the host tree of the pipal is strangled to death, its trunk decaying, leaving the pipal tree as a hollow cylinder of aerial roots, as this one in Ubud, Bali, Indonesia. (Photo copyright © by Kaj Halberg) 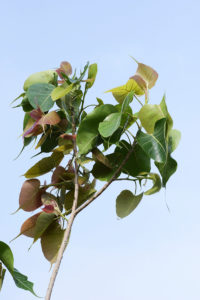 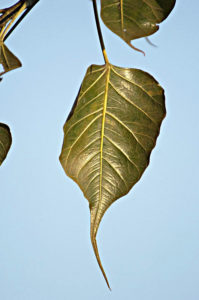 Pipal has broad, heart-shaped leaves, ending in a long, tapering point. (Photo copyright © by Kaj Halberg)
The sacred Bodhi tree
To Hindus, banyan and pipal are both a symbol of the mighty god Vishnu – friend and preserver of mankind.

To Buddhists, pipal is a symbol of nirvana (enlightenment). One day, about 500 B.C., a 35-year-old man was walking along a dusty road near the town of Gaya, northern India. For five years, he had been wandering the roads of northern India, searching for an answer to a question, which had bothered him for years: Why were people suffering?

Foot-sore, he sat down to rest in the shade of a huge pipal tree, determined not to leave, before he had found a satisfying answer to his question. For 49 days and nights he sat here, deep in meditation. Then he got up, convinced that he had found the answer.

From this day, he travelled about, preaching his new philosophy to a growing crowd of followers. His name was Siddharta Gautama, by his followers called The Buddha (‘The Enlightened One’). The pipal tree, beneath which he had obtained nirvana, was called the Bodhi Tree (’Tree of Enlightenment’). Over the following centuries, a village, named Bodhgaya, sprung up around this tree, and many Buddhist temples were built here. Today, thousands of pilgrims travel to Bodhgaya each year to revere a sacred pipal tree here, which is a direct descendant of the ancient Bodhi tree.

The Buddha and Buddhism are descibed in detail on the page Religion: Buddhism. 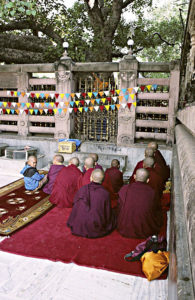 Buddhist monks, gathered in meditation in front of a sacred Bodhi tree in Bodhgaya, northern India. This tree is an offspring of the ancient pipal tree, beneath which Siddharta Gautama obtained nirvana. (Photo copyright © by Kaj Halberg) 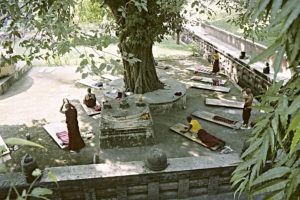