Vorsø on my mind

A black rain cloud passes over a tiny plantation near the south coast of Vorsø, called Tepotten (‘The Teapot’) – so named because of a tiny waterhole in the centre of it. – February 7, 1995. (Photo copyright © by Kaj Halberg)
(December 1981)
Towards the south-east, over the icebound inlet Horsens Fjord, the sun shows its blood-red face beneath a blanket of blackish clouds. Walking out on the ice, I glance back towards the tiny island. Slowly, the rising sun begins to illuminate its characteristic profile: The tall plantation of poplars far to the right; the two dark domes of the oldest woods on the island, Østerskov and Vesterskov; the red tiles on the roof of the farm house; the dense growth of trees in a tiny plantation, Tepotten, near the south coast; the dead poplars around the pond Vesterdam, where the cormorants live in the summertime; and, far to the left, the hilly silhouette of the islet Vorsø Kalv.

Only a tiny spot on the Danish map – but with a huge place in my heart. Since July 1981, this island has been my home, and now, in December, I live here all alone – in the coldest December ever recorded in Denmark, with a mean temperature of -4,0oC. The entire island is covered in snow, and everything is frozen, but nevertheless I feel a deep sense of gratitude, being able to live in so lovely and peaceful a place.

That this could be done at all, I have to thank my old friend, artist Jens Gregersen, for. In 1973, he was hired by the Ministry of Environment to embellish an exhibition room at Nature Reserve Tipperne, Ringkøbing Fjord, with his drawings and paintings, and in 1974, he and I worked together as bird watchers in the same reserve. Jens’s work here caused the Ministry to send him to Nature Reserve Vorsø, a small island in Horsens Fjord, to map the colony of cormorants there, and also to produce art work.

On Vorsø, Jens stayed in a laboratory building at the southern edge of one of the small woods on the island, Vesterskov. This fine little house was built in 1932, with the purpose of housing guest researchers, but had been very little used during the last ten years. Jens was kind enough to invite me to the island, which was otherwise hermetically closed to visitors, and of course I was happy to go there. The caretaker, who lived on the only farm on the island, tolerated my presence, presumably because his wife had Jens and me as boarders, so economically they got a little out of my presence.

In the early 1900s, Herluf Winge (1857-1923) was employed at the Zoological Museum of Copenhagen. He lived in a period, during which the understanding of nature was very poor indeed, and in which raptors, carnivores, and other ‘harmful’ creatures were ruthlessly persecuted. In 1919, Winge bequeathed his wealth of 70,000 Kroner to Copenhagen University, and his will stated that for this amount, the university was supposed to acquire and manage ”one or several sanctuaries, in which plants and animals should be fully protected, including the so-called harmful animals.” In December 1928, the university bought the island of Vorsø for 55,000 Kroner, and, following Winge’s instructions, the major part of the island was at once strictly protected.

Tenant farmer Peter Kristensen and his family, who lived on the only farm on the island, could stay, and Kristensen was allowed to farm about 14 hectares out of a total of 59 hectares. At the same time, he was to supervise the area. The reserve was immediately closed hermetically to visitors, and the island was in no way intended as a research area, which is obvious, judging from the scientific results from this period, which are indeed scanty, mainly focusing on botanical issues.

For economic reasons, the executive committee of Winge’s grant, in 1976, decided that the island should be turned over to the Ministry of Environment, free of charge, which happened in 1979. This was the starting signal of a far more purposive registration of especially zoological issues, and an unconditional fulfilment of the conservation regulations. The remaining arable land was immediately protected, and, finally, after 50 years, Winge’s idea of a real sanctuary was met. The farmer and his family moved from the island, and the farm house became a field research station, manned by a staff of observers, whose duties included various biological registrations.

After wading across 700 m of wadden sea, the first thing on Vorsø to catch your eye was this old sign, produced by the local blacksmith in the 1940s. The text says: “Strictly no admittance.” – April 30, 1978. (Photo copyright © by Kaj Halberg)

On the island, Jens stayed in a laboratory building at the southern edge of one of the small woods of the island, Vesterskov. – May 2, 1978. (Photo copyright © by Kaj Halberg)
When the Ministry of Environment took over Vorsø in 1979, the remaining arable land was immediately protected, and the two stable and barn buildings were utilized for storage, one of these a 50-metre-long barn, constructed of granite boulders. The barn was removed in 1981.

Weather vane on the roof of the large barn, depicting the so-called Frijsenborg Lion – the only remaining evidence from the 1800s, during which period the island was owned by Manor Frijsenborg. – August 18, 1980. (Photo copyright © by Kaj Halberg)

There were numerous large holes in the roof of this barn. In the old straw, seeds of rosebay willow-herb (Chamerion angustifolium) and stinging nettle (Urtica dioica) have sprouted. – August 18, 1980. (Photo copyright © by Kaj Halberg)

When the island was turned over to the Ministry of Environment, a far more purposive registration of especially zoological issues began. – These two pictures show the colony of greater cormorant (Phalacrocorax carbo ssp. sinensis), April 1982. (Photos copyright © by Kaj Halberg)

In the foreground Vestermark – one of the agricultural areas of the island, which was protected in December 1928 – with shrubs of sloe (Prunus spinosa), and vegetation of rosebay willow-herb (Chamerion angustifolium) and false oat-grass (Arrhenatherum elatius). In the centre an old system of semi-circular spits, named Kalvøerne, and in the background the islet Vorsø Kalv with vegetation of false oat-grass and shrubs of hawthorn (Crataegus sp.). – July 21, 1989. (Photo copyright © by Kaj Halberg)

The southern shore of Vorsø, with a coal-black rain cloud passing over the islet Vorsø Kalv. – August 4, 1985. (Photo copyright © by Kaj Halberg) 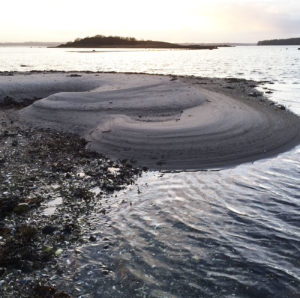 In the south-western corner of the island, a sand spit was created since the 1940s. In later years, the tip of this spit has begun to turn north, for which reason we have dubbed it Krumodden (‘the curved spit’). – January 21, 2020. (Photo copyright © by Jens Gregersen)