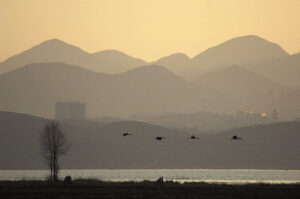 From their breeding grounds in Tibet, a large number of the threatened black-necked crane (Grus nigricollis) arrive every autumn at the Cao Hai Marshes to spend the winter here. In Chinese, the name means ’Sea of Grass’. (Photo copyright © by Kaj Halberg)
From Taiwan, Judy and I fly to Guiyang, capital of the state of Guizhou, south-western China, where Judy’s brother, Horng-i, and his colleague, Miss Li, are running a school for mechanics. 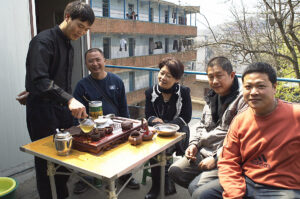 A caretaker at the school for mechanics in Guiyang serves tea for us. From left driver Uh Tao, Miss Li, Horng-I, and the school’s cook, Liu. (Photo copyright © by Kaj Halberg) 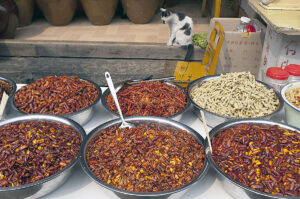 The Guizhou Province is famous for its numerous ways of preparing chilies. In this picture, various types of chili are displayed for sale in Guiyang. (Photo copyright © by Kaj Halberg) 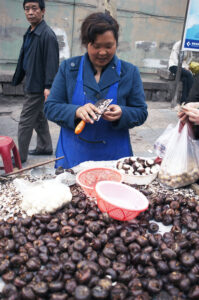 Woman in Guiyang, selling roasted water chestnuts, which are not at all chestnuts, but fruits of a species of spike-rush, Eleocharis dulcis. (Photo copyright © by Kaj Halberg) 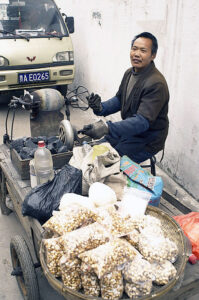 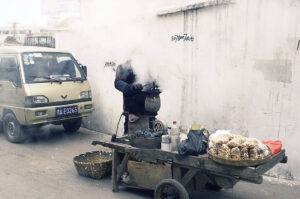 This man makes popcorn the old-fashioned way, by using a ‘pressure cooker’. During this process, a lot of steam is produced. (Photos copyright © by Kaj Halberg) 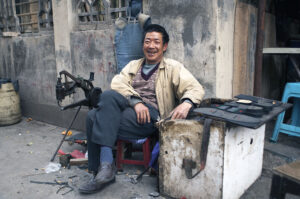 The ‘shop’ of this shoemaker is along a street in Guiyang. (Photo copyright © by Kaj Halberg)
”Expensive anything keep”
A few days later, together with Horng-i, Miss Li, and driver Uh Tao, we head west across the mountains of Guizhou. It is early spring, and the Mei Shan (’Plum Mountains’) are hidden in fog.

Our goal is the small town of Weining, where we board at the Black Necked Crane Hotel. In this area, people are justly proud of a large flock of the threatened black-necked crane (Grus nigricollis), which arrives every autumn from their breeding grounds in Tibet to spend the winter in the nearby Cao Hai (’Sea of Grass’), a large marsh area, covering some 60 km2.

On the hotel reception counter, I notice a sign, written in English: ”Expensive anything keep”. At first sight, the meaning of this sentence is not quite obvious, but some light is thrown on it with Judy’s help: Guests are requested not to leave any valuables in their room.

Weining is a small, sleepy town, situated among the barren hills east of Cao Hai. Small yellow motor taxis zoom about in the streets, and, together with horse carts, pulled by very small horses, they are the means of local transportation. As everywhere in China, people have a very relaxed attitude towards garbage, and the streets are littered with plastic bags and paper, flying about in the wind together with the ubiquitous dust. 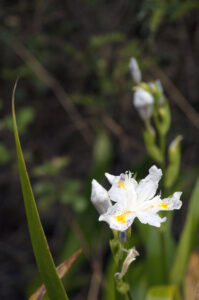 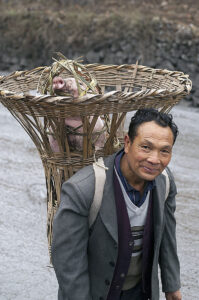 This man in Suicheng (‘Water Village’) is on his way home, carrying a pig, which he has bought at a market, in a basket. (Photo copyright © by Kaj Halberg) 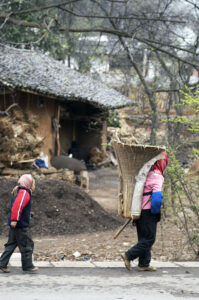 Village of the Yi people, with a flowering plum tree, near Weining. (Photos copyright © by Kaj Halberg) 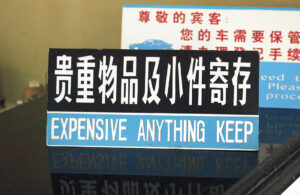 The meaning of the text on this sign on the reception counter in the Black Necked Crane Hotel is not quite obvious, but, as it turned out, guests are requested not to leave any valuables in their room. (Photo copyright © by Kaj Halberg) 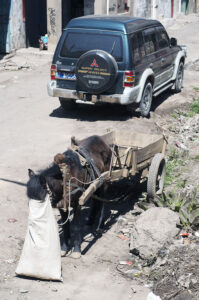 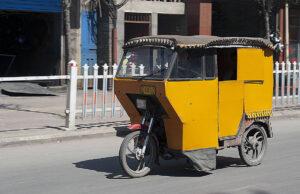 Means of transportation in Weining. (Photos copyright © by Kaj Halberg) 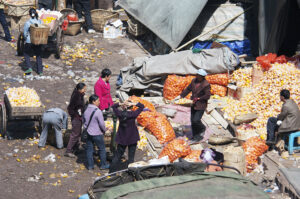 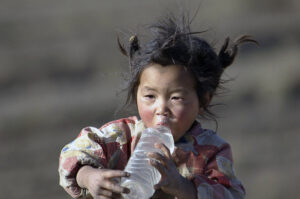 Grimy little girl, enjoying a bottle of water. (Photo copyright © by Kaj Halberg)
The Cao Hai marshlands
In Weining, an acquaintance of Miss Li, biologist Li Ching, is making a great effort to protect the cranes. Among other initiatives, he has succeeded in eliminating many of the draining canals along the shores of Cao Hai, and the marshes are now slowly reclaiming a number of former fields.

Accompanied by Li Ching, we drive along the shores of the marshland, and soon we spot the first flock of black-necked cranes, feeding in a field.

”You can go into the field”, says Li Ching. ”The cranes are used to people.”

This fact is clearly demonstrated by several men, who are angling in draining ditches near the birds, which are busy feeding, oblivious of the men. I succeed in getting very close to the cranes, which by now are somewhat alert. After a bit of trumpeting they take off, landing a moment later in a nearby field. I am somewhat subdued that I disturbed the birds too much, but Li Ching assures me that they often fly about anyway, without any obvious reason.

Several places along the marshes, we observe small flocks of feeding cranes, often accompanied by other bird species, including bar-headed goose (Anser indicus), ruddy shelduck (Tadorna ferruginea), and common crane (Grus grus). Li Ching is of the opinion that c. 400 black-necked cranes spend the winter in these marshes. The species has declined in later years. Some years ago, up to 800 could be counted in the area. In the neighbouring province, Yunnan, a larger flock of cranes are wintering, and possibly some of the Cao Hai birds have moved there.

In the afternoon, we hire a boat, with a local woman to punt it into the marshes. Initially, we pass through large stands of club-rushes, among which ruddy shelducks swim about, mostly in pairs. We also observe many citrine wagtails (Motacilla citreola) and moorhens (Gallinula chloropus), while great white egrets (Ardea alba) and grey herons (A. cinerea) are wading about, looking for fish.

In an open expanse of water, hundreds of ducks are gathered, mostly wigeon (Mareca penelope) and ferruginous ducks (Aythya nyroca), besides a few common pochards (A. ferina) and tufted ducks (A. fuligula). 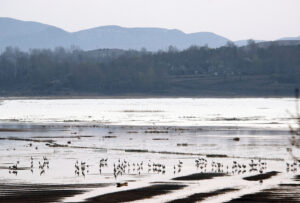 Many of the draining canals along the shores of Cao Hai have been eliminated, and the marshes are slowly reclaiming a number of former fields. (Photo copyright © by Kaj Halberg)

Black-necked cranes, feeding in a field near the Cao Hai Marshes. (Photos copyright © by Kaj Halberg)

Village with flowering poplars (Populus) near the marshes. The small building in the foreground is a daoist temple. (Photo copyright © by Kaj Halberg) 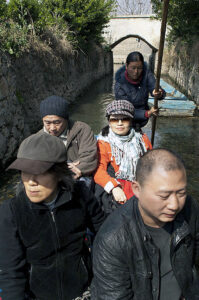 We hired a boat and a local woman to punt it into the marshes. From left Judy, Horng-i, Miss Li, and Uh Tao. (Photo copyright © by Kaj Halberg) 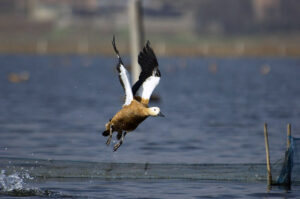 The ruddy shelduck is common in the marshes. (Photos copyright © by Kaj Halberg)

This forest is quite young, as it is regenerating after being completely cleared. The supply of wood was exhausted, mainly due to a former common belief in this area, stating that if your kitchen fire was extinguished, a member of your family would die. This meant that an immense amount of wood was burned for absolutely no use. The forest is now protected, and collecting firewood is banned.

Many other trees and shrubs grow here, including several species of rhododendron and a species of wintergreen (Gaultheria), all of the heath family (Ericaceae), a species of Photinia or Stranvaesia, of the rose family (Rosaceae), and a species of spicebush (Lindera), of the laurel family (Lauraceae).

Bird life is scarce in this forest, but I manage to observe white-browed laughing-thrush (Pterorhinus sannio).

We continue towards the highest mountain in Guizhou, Suei Gau Fong (’Highest Peak’), where Li Ching shows us a huge specimen of Magnolia liliflora, whose gorgeous white flowers have a pinkish tinge.

Late afternoon is spent at an old Daoist temple, situated on a mountain named Fung Shan (’Phoenix Mountain’). This temple dates back from the 1300s, but was somewhat damaged during The Cultural Revolution, when it was utilized as a stable. Several old stone slabs with inscriptions were fired at with guns. How barbaric!

Next to the temple is a small restaurant. We eat outside, and on this cool spring day, a pot of hot noodles does a lot of good, served with fried potatoes, peanuts, spring onions, stems of heart-leaved fishwort (Houttuynia), and chili sauce. 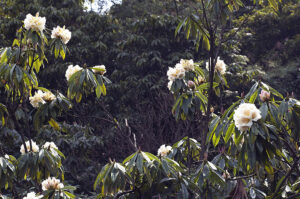 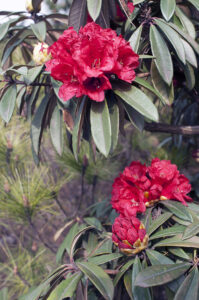 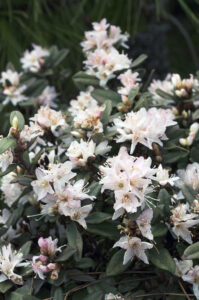 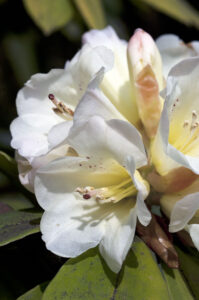 Several rhododendron species were blooming in the Wumeng Shan Mountains. The species with red flowers is R. delavayi. (Photos copyright © by Kaj Halberg) 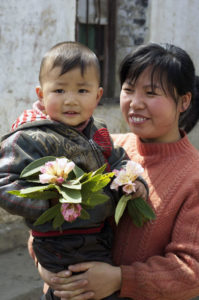 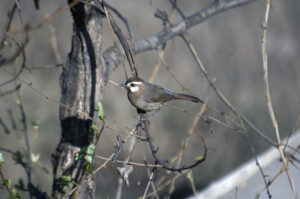 The white-browed laughing-thrush is widespread in western and southern China, and is also found in northern Indochina and north-eastern India. (Photo copyright © by Kaj Halberg) 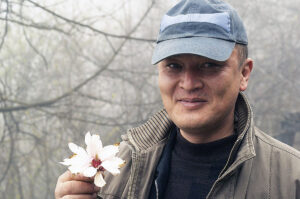 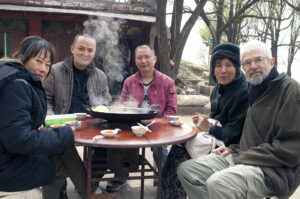 On a cold spring day, a large pot of hot noodles does a lot of good! In this picture, we are seated around a table outside the old Daoist temple on Fung Shan, from left Mrs. Li, Li Ching, Uh Tao, Judy, and me. (Photo copyright © by Kaj Halberg) 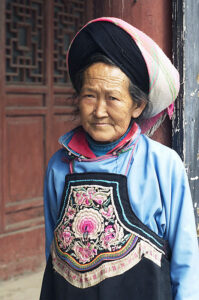 An elderly tribal woman outside the Daoist temple. (Photo copyright © by Kaj Halberg)
Rime-covered rhododendrons
The following day, we pay a visit to the same area, and our experience is as different from yesterday’s, as can possibly be. The night has been very cold, and the landscape is covered in a thin layer of snow. The terraced fields now stand out clearly against the brownish landscape, and each tile on the village roofs is framed by a bit of snow.

Trees and bushes are powdered with snow, and flowers of rhododendron and the spiny Prinsepia utilis are covered in a thick layer of rime. Out in the open, an icy wind is blowing, and blankets of fog come and go. In the afternoon, sunshine manages to pierce the fog, and the rime must yield.

During our second visit to Wumeng Shan, the terraced fields were covered in a thin layer of newly fallen snow. (Photo copyright © by Kaj Halberg)

The pine trees were covered in a thick layer of rime. (Photo copyright © by Kaj Halberg) 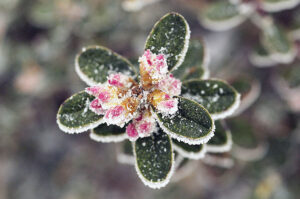 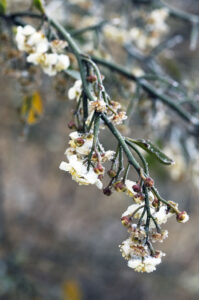