View of the Llaima Volcano (3,125 m), Parque Nacional Conguillio, with a beautiful lake, Laguna Captrén, in the foreground. (Photo copyright © by Kaj Halberg)
From the town of Curacautin, my companion Lars Skipper and I drive east towards Parque Nacional Conguillo. Near the park, we make a stop to stroll across an old lava stream, which stems from a volcanic eruption in 1957. The only vegetation on the lava rocks are numerous lichens.

Far away, the pointed, snow-clad peak of the Llaima Volcano (3125 m) seems to pierce the sky. We find a fine camping spot in an open forest, close to a gravel pit. At dusk, the owner appears – a friendly and talkative man, who is not at all opposed to our intention of camping in his forest. He informs us that it has been raining more or less continuously for the last week, and that today is the first fine summer’s day. The evening is pleasantly warm – at 9:30 p.m., our thermometer shows 26oC.

A beautiful lake
Laguna Captrén is a little jewel of a lake, surrounded by swampy meadows, in which grows a profusion of flowers, among these an abundance of a gorgeous orange species of avens, Geum magellanicum, and a species of groundsel (Senecio). On the lake surface, several bird species are swimming about, including flying steamer duck (Tachyeres patachonicus), Chilean pintail (Anas georgica ssp. spinicauda), Andean duck (Oxyura ferruginea), and white-winged coot (Fulica leucoptera). On the shore we observe a pair of ashy-headed goose (Chloephaga poliocephala) with goslings. Rocks around the lake are home to numerous lizard species, the most common of which is the painted tree lizard (Liolaemus pictus).

The only designated camping ground in the park is situated near the shores of a large lake, Lago Conguillo. The camping fee is outrageous – 15,000 Chilean Pesos per night (c. 22 US$). Around the campground, thousands of golden Inca lilies (Alstroemeria aurea) are blooming, while several white-throated treerunners (Pygarrhichas albogularis) are feeding on the tree trunks, nuthatch-like.

This gorgeous species of avens, Geum magellanicum, is common in meadows around Laguna Captrén. (Photo copyright © by Kaj Halberg)

Around our campsite, thousands of golden Inca lilies were in full bloom. (Photo copyright © by Kaj Halberg)

Many species of slipper flowers (Calceolaria) are found in Chile. In the background Lago Conguillo. (Photo copyright © by Kaj Halberg)
Monkey-puzzle trees – without monkeys
Parque Nacional Conguillo is home to what is probably the most beautiful growth of the national tree of Chile, pehuén (Araucaria araucana), in English called ‘monkey-puzzle tree’ – indeed a peculiar name, as no monkeys live in this part of South America.

In 1791-1795, Scottish naturalist Archibald Menzies (1754-1842) participated as surgeon and botanist in an expedition around the world on board HMS Discovery, under leadership of Captain George Vancouver (1757-1798). In Chile, while dining with the Viceroy, Menzies was served Araucaria seeds as a dessert. He popped some seeds into his pocket and was able to make them sprout on board ship. He returned to England with five healthy plants – the first of its kind in Britain. (Source: www.kew.org)

The English name originates from around 1850. In an English park, which had specimens of this tree, a visitor jokingly remarked that it would “puzzle a monkey to climb that tree” – referring to its stiff, spiny leaves. The name ‘monkey-puzzle tree’ stuck to this day.

The genus Araucaria belongs to an ancient group of conifers, which evolved in an era, before the ancient continent Gondwanaland began to separate. In those days, the distribution of Araucaria was limited to what is presently the southern hemisphere, and today members of the genus are found in South America, Australia, New Zealand, Norfolk Island, and New Caledonia.

Its leaves are triangular, 3-4 cm long and up to 3 cm broad at the base, very tough and with a sharp point. They can remain on the tree as long as 15 years, and in time they cover the entire surface of younger branches, only the trunk and old branches being devoid of them. Araucaria is usually dioecious, with male and female cones on separate trees. The female cones are wind-pollinated, maturing in about 18 months. The mature cones are very large, 12-20 cm diameter, holding about 200 seeds, each 3-4 cm long. The seeds, which are nut-like and edible, are extensively harvested in Chile.

The specific name araucana was derived from the name of a local people, the Araucanians, who ate the seeds. A sub-group of this people are the Pehuenches. In the local language, pehuén is the name of the monkey-puzzle tree, while che means ’people’. (Source: en.wikipedia.org/wiki/Araucaria_araucana)

We roam a wonderful forest, which contains a large number of giant and ancient trees. The largest pehuén in the park, called Araucaria Madre (‘Mother of the monkey-puzzle trees’), is c. 1,800 years old and c. 50 m tall, with a trunk diameter of c. 210 cm. Another very large tree species is the coigüe (Nothofagus dombeyi), one among ten species of southern beeches in Chile. 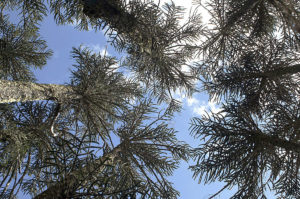 Grand forests of pehuén are ubiquitous in Parque Nacional Conguillio and a few other places in the Andes. Elsewhere, the species is endangered. (Photo copyright © by Kaj Halberg)

‘Monkey-puzzle tree’ is indeed a puzzling name, as there are no monkeys in this part of South America. The name originated in England. (Photo copyright © by Kaj Halberg) 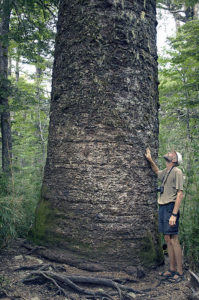 Lars, standing next to a giant pehuén, called Araucaria Madre (‘Mother of Monkey-puzzle Trees’), which is c. 1,800 years old and 50 m tall, with a trunk diameter of c. 2.1 m. (Photo copyright © by Kaj Halberg)

Forest of coigüe, one of ten species of southern beeches in Chile. (Photo copyright © by Kaj Halberg)

This old coigüe has been attacked by fungi. (Photo copyright © by Kaj Halberg)

Another parasite on trees is Cyttaria espinosae, a sac fungus, here growing on a coigüe. (Photo copyright © by Kaj Halberg)

Male Magellanic woodpecker. The female has black head, the red colour restricted to the base of the bill. (Photo copyright © by Kaj Halberg)

One of the very few smaller birds observed in the pehuén forest was this scaly-throated earthcreeper. (Photo copyright © by Kaj Halberg)
Snow caves and barren lava fields
We walk towards the snow-clad Sierra Nevada Range, following a ridge through a forest with numerous old coigüe, later also a few pehuén. There is a dense cloud cover, but only a few drops of rain fall, and in the afternoon the sun appears. The slope east of the ridge is covered in pehuén trees, their almost snow-white trunks standing out against the dark mountain side. Many of the trees are draped in old man’s beard lichens.

Vegetation along the upper part of the ridge consists of low shrubs of a different species of southern beech, Nothofagus alpina. Ultimately, these shrubs disappear, and we encounter the first snow. Along a stream of meltwater, a group of Ourisia poeppigii with bright red flowers add a splash of colour to the drab landscape, whereas a grassy area is full of other flowers, including fleabane (Erigeron), chickweed (Cerastium), a very compact species of violet, Viola atropurpurea, and the gorgeous Rhodophiala andicola, which belongs to the amaryllis family.

At this altitude, we observe very few birds, only a flock of yellow-bridled finches (Melanodera xanthogramma), feeding in the grass. Here and there, the melting snow has created ice caves, in which the walls and ’loft’ form a picturesque frame around nearby peaks in the Sierra Nevada.

The following day, we hike across the lava fields beneath the Llaima Volcano – a tremendous contrast to the landscape we experienced the previous day. The black lava gravel is almost completely barren. Only a few hardy plants have managed to take root here and there, and we see no animals at all.

Here and there, the western slopes of the Sierra Nevada are covered in pehuén trees, with almost snow-white trunks. (Photo copyright © by Kaj Halberg)

Ourisia poeppigii, with bright red flowers, growing near a stream. Formerly, this species was classified a member of the figwort family (Scrophulariaceae), but has now been moved to the plantain family (Plantaginaceae). (Photo copyright © by Kaj Halberg)

A very compact species of violet, Viola atropurpurea, growing in the harsh conditions of the Upper Sierra Nevada. (Photo copyright © by Kaj Halberg)

View from inside an ice cave in the Sierra Nevada. The tall trees are pehuén. (Photo copyright © by Kaj Halberg)

Only a few hardy plants had managed to take root here and there in the volcanic gravel beneath the Llaima Volcano. This picture shows Pozoa coriacea, an umbellifer, which is restricted to central Chile and western Argentina. (Photo copyright © by Kaj Halberg)
(Uploaded February 2016)
(Latest update July 2020)
Text & photographs © Kaj Halberg, 2015. All rights reserved. Contact: respectnature108@gmail.com