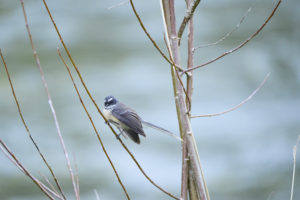 New Zealand fantail, near Trouson Kauri Park, North Island. (Photo copyright © by Kaj Halberg)
During a visit to New Zealand in 2019, one of the commonest birds was a tiny species, which, especially along streams, would often flit about in front of my face, catching insects.

As it turned out, this charming acquaintance was the New Zealand fantail (Rhipidura fuliginosa), which, as its name implies, is restricted to New Zealand. The plumage of this bird is very variable, being mainly grey, white, and pale brown. It also occurs in a dark morph, which is sometimes called black fantail. 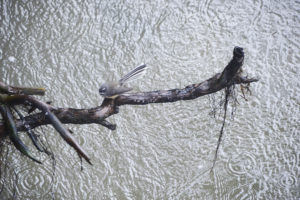 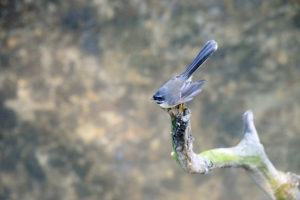 New Zealand fantail, Wai-O-Tapu Thermal Area, North Island. (Photos copyright © by Kaj Halberg)
Tiwakawaka in Maori mythology
Naturally, this bird also appears in the flourishing Maori mythology, where it is called tiwakawaka or piwakawaka. It is a messenger of the gods, bringing death or news of death to the people.

Tiwakawaka is also the name of a grandson of the demi-god and folk hero Maui-potiki, one of the first Maori settlers to arrive in New Zealand more than a thousand years ago. When Maui asked tiwakawaka to tell him, where his ancestress Mahuika kept the fire hidden, the bird refused. In retaliation, Maui grabbed it and squeezed it very hard. This is why the bird today has bulging eyes, and a tail which projects far behind its body. It also explains why it flies so erratically.

Another Maori explorer of those days was Kupe. When exploring the new land, Kupe had noticed the fantail, tiwakawaka, which carried its tail feathers erect and could spread them out like a fan. This challenging behaviour reminded Kupe that he was entering the domain of Tane, god of the forest. (Source: nzbirds.com/birds/fantail1.html) 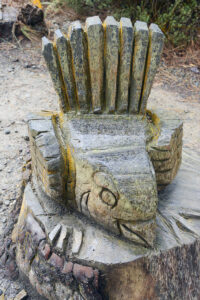 Maori wood carving on a totem pole, depicting a New Zealand fantail, Wai-O-Tapu Thermal Area. Pictures, depicting other Maori carvings, are shown on the page Culture: Wood carvings. (Photo copyright © by Kaj Halberg)
Fantails in general
Fantails, genus Rhipidura, also called fantail flycatchers, are a group of about 50 species of small insectivorous passerines, which got their name from their habit of incessantly spreading their tail feathers fan-like. These birds are widely distributed, from the Indian Subcontinent eastwards to southern China, the Philippines, and western Polynesia, and southwards through Southeast Asia and Indonesia to Australia and New Zealand.

Formerly, fantails were included in the Old World flycatcher family (Muscicapidae), but today they form a separate family, Rhipiduridae, together with two species of silktail (Lamprolia) and the drongo fantail (Chaetorhynchus papuensis).

Genetic research has caused three species, which were previously included in Rhipidura, to be transferred to other families. The yellow-bellied fantail (Chelidorhynx hypoxanthus), which is found in the Indian subcontinent, southern China, and the northern parts of Indochina, has been moved to the family Stenostiridae, whereas the slaty monarch (Mayrornis lessoni), which is endemic to Fiji, and the black monarch (Symposiachrus axillaris), which lives in New Guinea, are now included in the family Monarchidae.

In 1984, when I visited the Ifugao tribe in Luzon, northern Philippines, I was told that if a blue-headed fantail (Rhipidura cyaniceps) crossed the trail in front of you, it was regarded as an omen of bad luck, which would deter members of the tribe from travelling that particular day.

My adventures among the Ifugao are described on the page Travel episodes – Philippines 1984: Shamanism among Ifugao tribals.