Railroad tracks in evening light, Meiringen, Berner Oberland, Switzerland. (Photo copyright © by Kaj Halberg)
The Makatote Viaduct near Ohakune, North Island, New Zealand, is a steel truss railway bridge, 262 m long, which spans the Makatote River, 79 m above the water. When this bridge was constructed in 1905-1908, it was the tallest viaduct in New Zealand. Today, the Mohaka and North Rangitikei viaducts are taller, at 95 and 81 m, respectively. 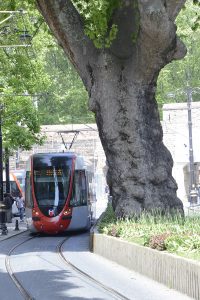 Metro train, passing by a huge oriental plane tree (Platanus orientalis), Sultanahmet, Istanbul, Turkey. This magnificent genus of trees is described on the page Plants: Ancient and huge trees. (Photo copyright © by Kaj Halberg)
The Nilgiri Mountains constitute a part of the Western Ghats, a mountain range, which stretches most of the way along the west coast of India, from Goa south to the southern tip of the subcontinent. The highest point in the Nilgiris, Dodabetta, reaches a height of 2,637 m.

Towards the end of the 1800s, a narrow-gauge railway track was constructed, heading out from the small town of Mettupalayam in the state of Tamil Nadu, leading up through the Nilgiri Mountains, via Coonoor, terminating at the hill station Ootacamund (Ooty). This steep railway is operated by a small blue steam train, the Nilgiri Mountain Express.

Over a distance of 46 km, the terrain rises from c. 300 to c. 2,200 m altitude, the tracks passing through 16 tunnels, and across 31 larger and c. 200 smaller bridges. The lower mountain slopes are covered in tropical monsoon forest, and this area is full of waterfalls. Above c. 1,400 m, the forest gives way to plantations of tea, pines, and eucalyptus.

Passengers have disembarked during a break at a tiny mountain station. (Photo copyright © by Kaj Halberg)

Coal is loaded onto the engine at Coonoor. (Photo copyright © by Kaj Halberg)
Long Bien Bridge is a truss bridge, spanning the Red River, also called Hong Ha (‘Red Sunshine’) or Song Cai (‘Mother River’), in Hanoi, Vietnam. It was constructed by the French in 1899-1902, using more than 3,000 Vietnamese workers. At that time, with a length of 2.4 km, it was one of the longest bridges in Asia. Cars are not allowed on this bridge, which is reserved for trains, scooters, and motorcycles.

Railroad bridge, near Sedrun, Tavetsch Valley, Graubünden, Switzerland. (Photo copyright © by Kaj Halberg)
Originally, the Jiancing Line Lumber Transportation Track, eastern Taiwan, was about 5.5 km long. As its name implies, it was constructed to bring out timber from the Taipingshan Mountains, which today constitute the Taipingshan National Forest Recreation Area. The Jiancing Historic Trail was established along remains of this old railroad track, where, besides the tracks themselves, one may see skids, switches, trolley axles, and deserted workers’ dwellings.

This sign near Karioi, North Island, New Zealand, warns about an ungated level crossing ahead. (Photo copyright © by Kaj Halberg)

Passengers, waiting for trains, Varanasi Railway Station, Uttar Pradesh, India. (Photos copyright © by Kaj Halberg)
The Alishan Forest Railway is a narrow-gauge line, 86 km long, originally constructed in 1912 by the Japanese Colonial Government in Taiwan to transport logs from the Alishan Mountains in the central part of the island. Passenger carriages were first added to the trains in 1918. The original steam locomotives have now been replaced by modern diesel engines. This line is unique, with its Z-shaped switchbacks, more than 50 tunnels, and 77 wooden bridges. Today, it is a popular tourist attraction, bringing passengers to the Alishan National Forest Recreation Area.

This small model, depicting a former Alishan steam engine, has been displayed as an eyecatcher outside a restaurant in Alishan. (Photo copyright © by Kaj Halberg)
Between October 1980 and March 1981, Steffen Madsen, Johnny Kristensen and I undertook a journey by car across Africa, from Morocco southwards to Zaire, thence eastwards to Tanzania and Kenya. As it turned out, this trip was very rewarding, but also very troublesome, mainly due to the terrible condition of the roads in Zaire.

While waiting for our visas for Zaire in Bangui, the capital of the Central African Republic, we made friends with five Germans, a married couple, Franz and Gizela, and their friend Albert, who drove in a small car, quite similar to our VW van, and Jürgen and Wolfgang, who were the proud owners of a huge, powerful Deutz truck.

Together, we travelled through Zaire, and when we had gotten utterly tired of the miserable roads, we decided to load the cars onto a train, travelling from Bumba to Isiro. As it turned out, this was a very relaxing trip, which lasted four days. Most of the time, the train was moving at a snail’s pace, and from the top of the truck we could enjoy the landscape, alternating between forests, rivers, farmland, and villages.

Part of the journey, between Morocco and eastern Zaire, is related on the page Travel episodes – Africa 1980-1981: An arduous journey across Africa.

Locals, inspecting our cars, which have been loaded onto a railway wagon in Bumba. Johnny is seen in the background. (Photo copyright © by Kaj Halberg)

This picture shows a situation from our train journey, between Buta and Isiro. Steffen is reading on top of our van, in the background Franz. I took the picture from the roof of the truck. (Photo copyright © by Kaj Halberg)

Book seller, Varanasi Railway Station, Uttar Pradesh, India. (Photo copyright © by Kaj Halberg)
One evening, during a car trip around Chile, my companion Lars Skipper and I pitched our tents at a railroad track near the city of Antofagasta, as we were unable to find a more suitable place for camping. During the night, a freight train passed by at a snail’s pace, and the ground was shaking so much that I felt it was coming right through my tent!

An event from our trip is related on the page Travel episodes – Chile 2011: The white forest.

Freight train, moving at a snail’s pace across the Atacama Desert, near Antofagasta, Chile. (Photo copyright © by Kaj Halberg)

Passengers in the waiting hall, Varanasi Railway Station, Uttar Pradesh, India. (Photo copyright © by Kaj Halberg)
The railway between Ohakune and Raetihi, New Zealand, was completed in 1912. Prior to that, passengers would disembark at Ohakune and go by stage coach to Raihiti (or vice versa).

During construction of the railroad, living conditions in Ohakune were quite basic. Many workers stayed at Mrs. Fraser’s Boarding House, shown in this postcard, depicted on an information board in Ohakune.

Passengers, disembarking the train from Wellington at Ohakune Railway Station, with coaches waiting to bring them down the Old Coach Road, 1908. This picture was published in Auckland Weekly News, November 5, 1908, here depicted on an information board in Ohakune. 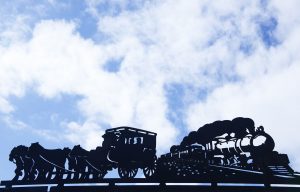 Old-fashioned steam engine, Varanasi Railway Station, Uttar Pradesh, India. (Photo copyright © by Kaj Halberg)
The huge Jiji earthquake, which occurred in Nantou County, Taiwan, on September 21st, 1999, was the second-deadliest in recorded history in the country, killing 2,415 people and injuring about 11,300. The damage done was estimated at ten billion US$.

These railroad tracks were bent during the huge Jiji earthquake. Today, this spot has been preserved as memorial. (Photos copyright © by Kaj Halberg)