Frozen waterdrop, hanging down from a Primula sessilis flower, Dodi Tal, Asi Ganga Valley, Uttarakhand, northern India. Snow, which fell on the plant the previous evening, partly melted, but froze again during the night. (Photo copyright © by Kaj Halberg)
Primrose, cowslip, oxlip – these names all refer to members of the genus Primula. They are native to temperate areas of the Northern Hemisphere and of southern South America, and also to tropical mountains in Ethiopia, Indonesia and New Guinea. This large genus contains about 500 species, almost half of which are found in Central Asia, China, and the Himalaya.

The generic name is a diminutive of the Latin prima (’first’), referring to the early flowering of several species. Many of these plants are indeed very hardy, as seen on the pictures above.

The name primrose is from the Latin, prima rosa, meaning ‘the first rose’, although primroses are not at all related to roses.

According to some authorities, the name cowslip is a corruption of an Old English word, cuslyppe, meaning ‘cow dung’. This probably refers to the favoured habitat of the common cowslip (Primula veris), namely dry slopes, grazed by cattle. Others claim that the word is a corruption of cow’s leek, derived from the Anglo-Saxon word leac, meaning ‘plant’.

It has been said that the name oxlip, which is a corruption of ox and slip, refers to the fact that oxlip, like cowslip, often grows on cattle grazing grounds. This may be a wrong presumption, as true oxlip (Primula elatior) – at least in the northern part of its distribution area – mainly grows in forests.

Common cowslip (Primula veris) is very common in large parts of Europe and western Asia. The specific name is the genitive case of ver (’spring’), referring to the early flowering of this species. Popular names include key flower, Herb Peter, and Our Lady’s keys, the first two referring to the inflorescence, which resembles a bunch of keys, the emblem of St. Peter. According to legend, St. Peter heard that some people were trying to enter heaven by the back door, instead of the front gates, which were guarded by him. Hurrying towards the back door, he dropped his keys, which took root and became cowslips. German names of this species include Echte Schlüsselblume, meaning ‘true key flower’, and Himmelsschlüssel, meaning ‘keys of heaven’.

In Norse mythology, the flower was dedicated to Freya, called the Key Virgin, a goddess associated with love, beauty, and fertility. When the heathens converted to Christianity, the plant was instead dedicated to Virgin Mary, hence the name Our Lady’s keys.

In A Midsummer Night’s Dream, by William Shakespeare (1564-1616), a mischievous puck, or spirit, Robin Goodfellow, meets a fairy, asking her what she is doing. She says:

And I serve the fairy queen
To dew her orbs upon the green,
The cowslips tall her pensioners be,
In their gold coats spots you see,
Those be rubies, fairy favours,
In those freckles live their saviours,
I must go seek some dewdrops here,
And hang a pearl in every cowslip’s ear.
Modified into today’s English:
I serve the fairy queen,
Adding dew drops to her flowers in the grass.
The tall cowslips are her servants.
In their golden coats you can see spots.
Those are rubies, gifts from the fairies.
Their sweet smell comes from those freckles.
Now I must go to find some dewdrops,
And hang a pearl earring on every cowslip flower.
Common cowslip has been utilized medicinally for hundreds of years. Read more about this usage on the page Traditional medicine. 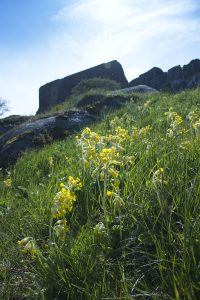 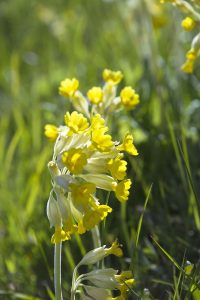 In these two pictures, common cowslip grows on a slope beneath the ruins of Hammershus Castle, Bornholm, Denmark. (Photos copyright © by Kaj Halberg)
English primrose (Primula vulgaris, also called P. acaulis) is among the earliest flowering plants of northern Europe, in mild springs blooming as early as the beginning of March. This species is native to Europe, north-western Africa, and southwest Asia, eastwards to Iran. Three subspecies are recognized. The nominate vulgaris, which is distributed in northern, western, and southern Europe, has pale yellow flowers, while balearica, which is endemic to the Balearic Islands, has white flowers. The third subspecies, sibthorpii, is found in the Balkans and southwestern Asia. It has pink, red, or purple flowers. 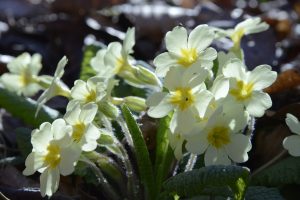 English primrose, Møn, Denmark. In the upper picture, lesser celandine (Ranunculus ficaria) and white anemone (Anemone nemorosa) are also seen. (Photos copyright © by Kaj Halberg)
True oxlip (Primula elatior) is found throughout Europe, north to Denmark and southern Sweden, and in northern Asia, eastwards to the Altai Mountains. It is mainly found in hardwood forests, where it blooms before foliation of the trees. 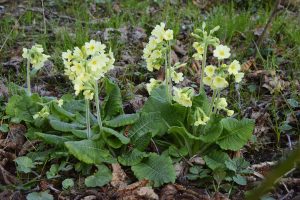 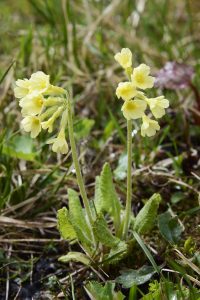 In the Alps, subspecies intricata of true oxlip grows in open areas, in this picture near Grossglockner, Austria. (Photo copyright © by Kaj Halberg)
Where cowslip, English primrose, and/or true oxlip grow together, hybridization often takes place between them. In Denmark, a good place to study these hybrids is in the forest at the white cliffs of the island of Møn, where all three species grow. 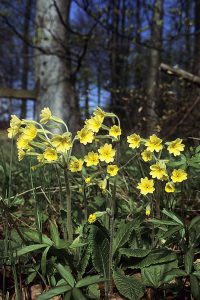 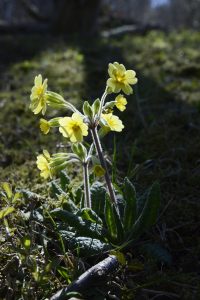 Birdseye primrose often forms large populations, as in this picture from a littoral meadow on the island of Bornholm, Denmark. The blue flowers are common butterwort (Pinguicula vulgaris). (Photo copyright © by Kaj Halberg)

Birdseye primrose, Bornholm, Denmark. (Photo copyright © by Kaj Halberg)
The Alps are home to 25 species of primrose.
Least primrose (Primula minima) is easily identified by the rather large, deeply cut petals and the diminutive leaves. This species is quite common in the eastern half of the Alps, growing between 2,000 and 3,000 metres altitude.

Least primrose, photographed in Grossglockner area, Austria. (Photo copyright © by Kaj Halberg)
Sticky primrose (Primula glutinosa) has stiff, upright, serrated, glutinous, and fleshy leaves. Its flowers are bluish-violet flowers, the sepals covered by dark bracts. This species is found in the central and eastern Alps, where it often grows at high altitudes, up to 3,250 m.

Sticky primrose, Stubach Valley, Hohe Tauern, Austria. (Photos copyright © by Kaj Halberg)
Primroses probably originated in the Himalaya, where a bewildering array of species is found, about 72 in total. They vary greatly in size, ranging from 5 cm high dwarfs to robust plants almost one metre tall. A number of Himalayan species are presented below.
The tiny Primula atrodentata is found in open areas between 3,500 and 4,900 metres altitude, distributed from Uttarakhand east to south-eastern Tibet.

Primula atrodentata, photographed in the Khumbu region, eastern Nepal. (Photo copyright © by Kaj Halberg)
The ultimate contrast to Primula atrodentata is the stately, almost one metre tall Sikkim primrose (Primula sikkimensis), which grows in wet meadows between 2,900 and 4,800 metres altitude, from western Nepal to south-western China.

This beautiful Sikkim primrose was also encountered in the Khumbu region, eastern Nepal. (Photo copyright © by Kaj Halberg)
Primula denticulata is the most abundant primrose species in the Himalaya, growing in forest clearings and grassy areas. It has a broad altitudinal range, found between 1,500 and 4,500 metres, from Afghanistan eastwards to Myanmar. As a rule, the inflorescences of this very variable species become larger and denser with higher altitude.

Primula denticulata is abundant around Annapurna Base Camp, central Nepal, where this picture was taken. (Photo copyright © by Kaj Halberg)

Primula denticulata, Khumbu, eastern Nepal. (Photo copyright © by Kaj Halberg)
Usually, the golden-eyed primrose (Primula strumosa) has bright yellow flowers, but it hybridizes freely with the purple P. calderiana, sometimes resulting in yellow, white, blue, and purple flowers in a single population. It is found in the eastern Himalaya, from Nepal eastwards to China, at altitudes between 3,500 and 4,300 metres.

These pictures are from the Ghunsa Valley, eastern Nepal, where the golden-eyed primrose is abundant. In the bottom picture, an inflorescence has been bent to the ground by snowfall. (Photos copyright © by Kaj Halberg)
With its broadly bell-shaped flowers, Primula wollastonii differs significantly from most other species in the genus. It has a rather limited distribution, found in central and eastern Nepal, and in southern Tibet, between 3,600 and 4,900 metres altitude.

Primula wollastonii, Gokyo Valley, Khumbu, eastern Nepal. (Photo copyright © by Kaj Halberg)
The stout Primula macrophylla is found in Central Asia and the Himalaya, where it grows in meadows between 3,300 and 4,800 metres altitude. Its leaves are lanceolate and entire, to 30 cm long, farinose beneath, and its flowers are lilac or purple.

Primula macrophylla, photographed in the Khumbu area, eastern Nepal, where this species is very common. (Photo copyright © by Kaj Halberg)
Primula primulina is a tiny species, easily identified by its flowers, which have a tuft of white hairs in the throat. It grows in open areas at high altitudes, between 3,600 and 5,000 metres, from Uttarakhand, northern India, eastwards to south-eastern Tibet.

Primula primulina, Gokyo Valley, Khumbu, eastern Nepal. Another primrose, P. atrodentata, is seen to the left. (Photo copyright © by Kaj Halberg)
Another tiny Himalayan species, the round-leaved primrose (Primula rotundifolia), grows on rocks between 3,500 and 5,000 metres altitude. It has a rather limited distribution, from Nepal eastwards to south-eastern Tibet.

Round-leaved primrose, Khumbu, eastern Nepal. (Photo copyright © by Kaj Halberg)
Primula sessilis can be identified by its serrate, strongly wrinkled leaves and by its rounded petals, ending abruptly in a single small tooth. This species is fairly common in forests between 2,100 and 3,700 metres altitude, from Kashmir to western Nepal.

In the Himalaya, offerings to stone cairns, sacred trees etc. indicate remnants of pre-Hindu and pre-Buddhist animism. You may read more about this belief elsewhere on this website, see Religion: Animism

Primula stuartii is very common in the Great Himalayan National Park, Himachal Pradesh, where this picture was taken. (Photo copyright © by Kaj Halberg)

These Hindus place a flower offering, consisting of yellow Primula stuartii, yellow Geum elatum, and blue and white Anemone obtusiloba, on a stone cairn – a shrine dedicated to a local Hindu goddess atop Rakhundi Peak (3622 m), Great Himalayan National Park, Himachal Pradesh, India. This goddess is probably a form of Devi, the god Shiva’s shakti (female aspect), as the trident is a symbol of Shiva. – Read more about Anemone obtusiloba on the page Plants: Anemones and pasque flowers. (Photo copyright © by Kaj Halberg)
The inflorescence of Primula glomerata, which is found from western Nepal eastwards to south-eastern Tibet, is a very dense globular head.

Primula glomerata, Langtang National Park, central Nepal. Leaves of a cinquefoil, Potentilla peduncularis, and a dwarf rhododendron, are seen in the background. (Photo copyright © by Kaj Halberg)
Primula edgeworthii is abundant in forests in the western Himalaya, from Himachal Pradesh eastwards to central Nepal, growing between 2,100 and 4,100 metres altitude. Its long-stalked, bluish-violet flowers sprout directly from the leaf rosette.

Primula edgeworthii, photographed in the Annapurna area, central Nepal. (Photo copyright © by Kaj Halberg)
As its specific name implies, the leaves of Primula geraniifolia resemble those of certain species of geranium. This species mainly grows on wet banks in forests, between 2,700 and 4,600 metres altitude, from central Nepal to south-western China. 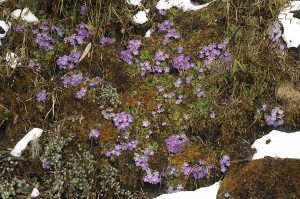 Primula petiolaris, Langtang National Park, central Nepal. (Photo copyright © by Kaj Halberg)
The inflorescences of some primrose species differ from those of most other members of the genus in that the flowers are arranged in several umbels up the stem. Two such examples are shown below.

The golden-yellow Primula floribunda grows on humid rocks, from Afghanistan eastwards to western Nepal. This one was observed in a ditch along a road, Uttarakhand. (Photo copyright © by Kaj Halberg)