India 1997: Golden Temple of the Sikhs

Hari Mandir, dubbed ’The Golden Temple’, is reflected in the sacred pond Amrit Sarovar. (Photo copyright © by Kaj Halberg)
Sikhism originated in Punjab, north-western India, founded by Guru Nanak (1469‑1539), who wanted to combine the best from Hinduism and Islam.

As a consequence of his conviction that everybody is born equal, he was very much opposed to the Hindu caste system, which claims that you are born into one of four castes. This caste system is described in detail on the page Religion: Hinduism.

Originally, leaders of the Sikhs were the so-called Gurus – ten in succession. In principle, the sacred book of Sikhism, Adi Granth, is the eleventh, eternal Guru. All Sikh temples have a copy of these sacred scripts, from which passages are recited daily.

Sikhs can be recognized by their elaborately bound turban. Many are employed as rickshaw or bus drivers. (Photo copyright © by Kaj Halberg)
The sacred pond
In 1577, the Fourth Guru, Ram Das, heard rumours about a cripple who had been cured in a small pond. This pond, which became the focus of Sikh worship, was named Amrit Sarovar (‘The Pond with the Nectar of Eternal Life’), and a temple was erected in the centre of it. Today, the pond is square, measuring 165 m across. For Sikhs, a bath in this pond equals a Hindu pilgrimage to the 68 most sacred Hindu destinations.

The temple in Amrit Sarovar, Hari Mandir (‘Abode of God’) was destroyed several times by invading Afghan Muslims, but was rebuilt each time. Around the sacred pond, a town named Amritsar was founded – today a large city.

Reflection of Hari Mandir in the sacred pond. (Photo copyright © by Kaj Halberg)
The Khalsa Brotherhood
In 1699, the 10th Guru, Gobind Singh, instigated the Khalsa, a brotherhood of warriors, whose duty it is to protect the innocent from any form of religious persecution. He introduced the rule of the five Kakkers, which all members of the brotherhood must follow: Kesha (hair and beard are never to be cut), Kangha (always bring a comb), Kachha (wear shorts), Kara (wear a metal ring around your wrist), and, finally, Kirtipan (always be armed with a sword or a knife to defend the innocent).

The Khalsa Brotherhood is described in detail on the page Religion: Sikhism.

Visiting Hari Mandir
Accompanied by my friend Søren Lauridsen, I pay a visit to Hari Mandir. Everybody, regardless of religion, race, culture, or sex, is welcome, as long as you follow a number of simple rules. Shoes and socks must be stored at the entrance, and your feet must be rinsed before you enter. Your hair must be covered during your visit, and stimulants and intoxicating substances are banned on the premises.

Above the entrance, the triangular orange Sikh banner, Nishan Sahib, is fluttering. The temple is guarded by stern, but friendly Sikhs, who wear a blue, black, or saffron turban. We also encounter proud Nihang (’Crocodile Sikhs’), armed with long spears. These Nihang are followers of a militant guru, Gobind Singh. They wear long, blue robes and pointed turbans, to which is attached a Sikh emblem.

A walkway, Parikrama, 8 m wide, has been constructed around the pond, consisting of polished marble slabs, adorned with beautiful patterns. We are here on a quiet day, and only a few pilgrims enjoy a sacred bath in the pond. Hundreds of large carps live in the water, occasionally emerging to gulp a mouthful of air. They assist in keeping the water clean. 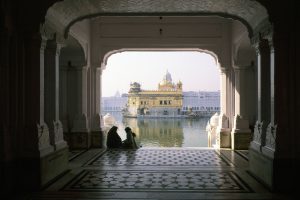 As long as you follow a number of simple rules, everyone is welcomed into Hari Mandir. (Photo copyright © by Kaj Halberg)

Nihang Sikhs, armed with long spears, are followers of a militant guru, Gobind Singh. They wear long, blue robes and pointed turbans. (Photo copyright © by Kaj Halberg)
‘The Golden Temple’
In the centre of the pond is the sanctum sanctorum, Hari Mandir, a temple in three stories. As in all Sikh temples, the roof is onion- or lotus-shaped, and the roof and parts of the marble walls are covered in pure gold plates, all together weighing more than 100 kilos. This gold-covering has given rise to the popular name, ‘The Golden Temple’. The gold was donated by Maharaja Ranjit Singh – the person who united Punjab.

Those parts of the walls, which are not covered by gold plates, are beautifully adorned with inlaid precious stones. A marble bridge, 62 m long, leads from the edge of the pond to the temple. It is densely packed with pilgrims, each bringing an offering, prasad, comprising ghee (clarified butter), flour, and sugar.

On the lower floor of the temple, priests are singing and playing music from dawn to dusk, and often in the evening as well. On the second floor, Adi Grant, the sacred book of the Sikhs, is kept during daylight hours, and priests continually recite from its c. 3,500 hymns. Pilgrims place offerings of money or flowers near the sacred script. In the evening, the sacred book is carried to a building with golden domes, Akhal Takht, erected in 1609 as the religious parliament of the Sikhs.

At the southern end of the Parikrama is a temple for Baba Deep Singh, a Sikh scholar and warrior, who continued fighting against the Afghans, even after being decapitated. This martyr is described in detail on the page Religion: Sikhism. Inside the temple is a painting, depicting Baba Deep Singh, standing with his head in his hands. The temple also has a library and a clock-tower. The clock, however, has no hands.

A marble bridge, 62 m long, leads from the edge of the pond to the temple. (Photo copyright © by Kaj Halberg)

My companion Søren with an offering, prasad, consisting of ghee (clarified butter), flour, and sugar. When visiting the temple, your hair must be covered. (Photo copyright © by Kaj Halberg)
Sikh hospitality
A flight of stairs leads up to a brownish building, Guru Ram Das Langar, where up to 3,000 people can eat simultaneously. Following Sikh principles about unity and equality, the meals are free.

Behind the dining hall are hostels, where anybody can spend up to three nights, also without pay. In former days, you could stay as long as you wished, but this was changed, when India was invaded by Western hippies in the 1960s. The hippies, who generally had very little money, grossly exploited this opportunity, staying for weeks. For this reason, the Sikhs had to introduce the new rule of staying maximum three nights in their hostels.

Several sacred jujube trees (Ziziphus mauritiana), which supposedly possess healing powers, are growing on the temple premises. Near the main entrance is one such tree, about 475 years old, to which women, who wish to give birth to a son, attach bits of cloth as an offering.

You may read more about the jujube tree on the page Traditional medicine.

This jujube tree is about 475 years old. These sacred trees supposedly possess healing powers. (Photo copyright © by Kaj Halberg)
Fighting for an independent Sikh state
Throughout their long history, Sikhs have often wished to create an independent state of their own, Punjab. Several times during British Rule, and also after India’s independence, Sikhs have rebelled.

On two occasions, whole-scale massacres have taken place in Amritsar. On 13th April, 1919, a short distance east of Hari Mandir, c. 20,000 people were demonstrating peacefully against a new law, which permitted British forces, without any cause, to arrest and imprison Indians.

Without being provoked, General Dyer and his 150 troops suddenly opened fire. Many demonstrators were shot in the back, when they tried to escape. According to official numbers, 337 men, 46 boys, and a baby were killed, and more than 1,500 wounded. In Europe, numerous governments fumed against the British. The act, however, only enforced the Indian Freedom Movement, and many people followed Mahatma Gandhi’s call for civil disobedience.

During the 1980s, many Sikhs fought for an independent Punjab. In 1984, Indian Prime Minister Indira Gandhi launched the so-called Operation Blue Star, ordering troops, heavily armed with tanks and other artillery, to storm Hari Mandir, in which militant Sikhs had taken shelter.

Eventually, the army took control of the temple, but about 200 soldiers and 2,000 others, among these many pilgrims, were killed during a three-day long battle. On 6th of June, the Indian government declared that the temple had been ‘liberated’. This action, however, was soon revenged. A few months later, Indira Gandhi was murdered by two of her own Sikh guards.

Many of the temple buildings were heavily damaged by bombings, including the two Ramgarhia Minarets. They were restored in 1997.

In 1987, Sikh separatists again occupied the temple. Prime Minister Rajiv Gandhi launched Operation Black Thunder, but this time Indian authorities managed to persuade the rebels to surrender without confrontations. Since then, Punjab has been more peaceful, and today Amritsar is as safe as any other city in India.

In Hari Mandir, a flight of stairs leads up to the Central Sikh Museum, which displays paintings of the 1919-massacre, and macabre photos, depicting people killed during the Sikh rebellions.