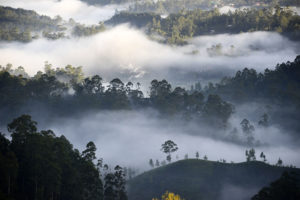 A snow-white Buddhist stupa is dimmed by morning fog, near Haputale, Sri Lanka. – Stupas and other aspects of Buddhism are described in depth on the page Religion: Buddhism. (Photo copyright © by Kaj Halberg) 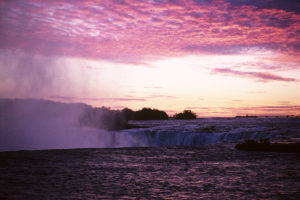 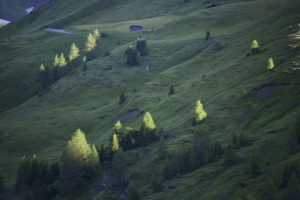 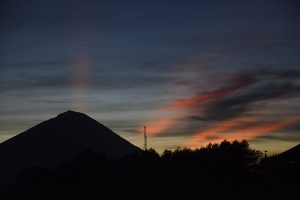 Sunrise behind Gunung Abang (2155 m), the third-highest mountain on Bali, Indonesia. (Photo copyright © by Kaj Halberg)
Morning has broken like the first morning,
Blackbird has spoken like the first bird.
Praise for the singing,
Praise for the morning,
Praise for them, springing fresh from the world.
– Eleanor Farjeon (1881-1965), English poet and children’s author, text written to a traditional Scottish Bunessan hymn, first appearing with English words in the second edition of Songs of Praise, 1931. The editor, Percy Dearmer, had asked Farjeon “to make a poem to fit the lovely Scottish tune.”

In 1971, the song was popularized by British singer Steven Demetre Georgiou (born 1948), who performed under the name Cat Stevens. Today, he calls himself Yusuf Islam.

Bunessan hymns are named for the village of Bunessan, situated on the Isle of Mull, Scotland. In this village lived Màiri Dhòmhnallach (1789-1872), in English called Mary Macdonald, who spoke only Gaelic. She wrote her hymn Leanabh an àigh to a traditional melody.

One morning early I went out
On the shore of Lough Leinn.
The leafy trees of summertime
And the warm rays of the sun.
As I wandered through the townlands
And the luscious grassy plains,
Who should I meet but a beautiful maid,
At the dawning of the day.
No cap or cloak this maiden wore,
Her neck and feet were bare,
Down to the grass in ringlets fell
Her glossy golden hair,
A milking pail was in her hand,
She was lovely, young and gay,
Her beauty excelled even Venus,
At the dawning of the day.
On a mossy bank I sat me down
With the maiden by my side,
With gentle words I courted her
And asked her to be my bride.
She said to me, “Go away
and let me go – you rake!
There from the south the light is coming
with the dawning of the day.”
The Dawning of the Day, in Gaelic Fáinne Geal an Lae (literally ‘The bright ring of the day’), composed by Irish harpist Thomas Connellan (c. 1640-1698).
The pictures on this page show various aspects of dawn at locations around the world. 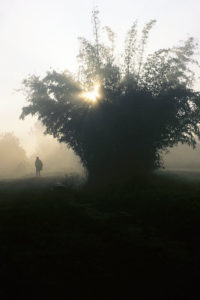 On a foggy morning in the Nepal Terai, the tropical lowland plains beneath the foothills of the Himalaya, a farmer is hurrying past a growth of bamboo on his way to work in the fields. (Photo copyright © by Kaj Halberg) 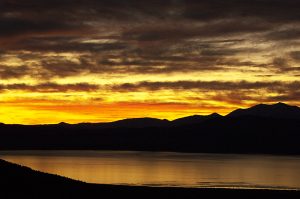 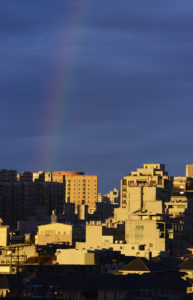 Early in the morning, a rainbow stands over high-rise buildings in the city of Taichung, Taiwan. (Photo copyright © by Kaj Halberg) 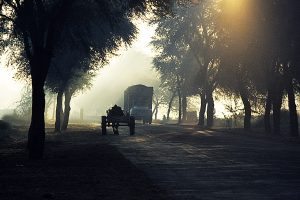 Traffic at dawn, Bahawalpur, Sind, Pakistan. (Photo copyright © by Kaj Halberg)
Poplars (Populus), also called aspen or cottonwood, of the willow family (Salicaceae), is a genus of anywhere between 25 and 35 species of trees, some of which are indeed majestic, growing to 50 m tall, and with a trunk diameter up to 2.5 m. Poplars are deciduous, and several species display brilliant yellow foliage in the autumn, examples of which may be seen on the page In praise of the colour yellow.

Poplars are native to the major part of the Northern Hemisphere, from subarctic areas southwards to Mexico, North Africa, Iran, the Himalaya, and China. 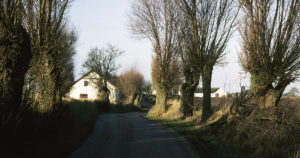 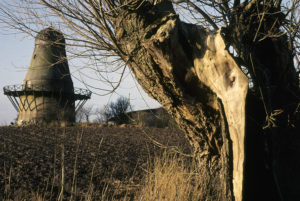 Pruned Canadian poplars (Populus x canadensis) in morning light, Lyø, Funen, Denmark. In the lower picture, a ruined Dutch-type windmill is seen in the background. (Photos copyright © by Kaj Halberg)
Daoism is the prevalent religion in Taiwan, in parts of China, and among Chinese residents in Malaysia and elsewhere. This colourful religion is described in depth on the page Religion: Daoism in Taiwan.

Morning in the limestone area around Yangshuo, Guangxi Zhuang, China. A Daoist temple has been erected atop one of the peaks. (Photo copyright © by Kaj Halberg) 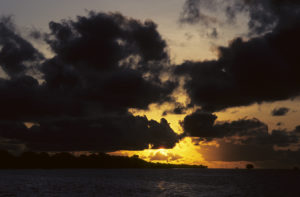 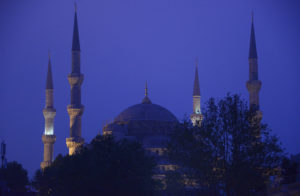 Early morning at Sultanahmet Camii, popularly called ‘The Blue Mosque’, Istanbul, Turkey. This magnificent building was erected during the reign of Sultan Ahmet I (1603-1617). (Photos copyright © by Kaj Halberg) 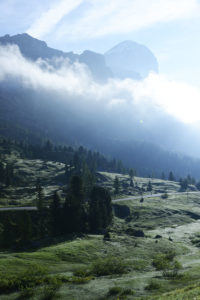 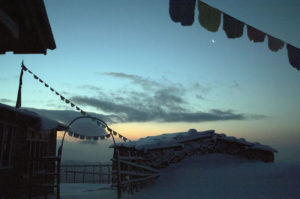 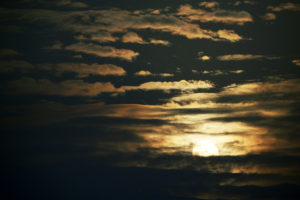 At sunrise, a Masai giraffe (Giraffa camelopardalis ssp. tippelskirchi) is silhouetted against Ol Doinyo Lengai, Lake Natron, northern Tanzania. This mountain is sacred to the local Masai people. (Photo copyright © by Kaj Halberg)
The mallard (Anas platyrhynchos) is very widely distributed across subarctic, temperate, and subtropical areas of North America, Eurasia, and North Africa, southwards to Mexico, Morocco, Egypt, Pakistan, and China, and it has also been introduced to many other places as a hunting object, including South America, New Zealand, Australia, and South Africa. The drake is a gorgeous bird in breeding plumage, with grey sides, purple breast, and glossy-green head, with a blue shine from certain angles. The female is a uniform speckled brown. 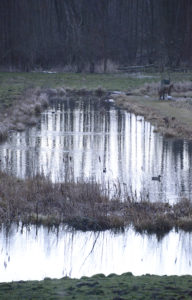 Pond at dawn with mallards, Funen, Denmark. The pale birds to the right are domestic geese. (Photo copyright © by Kaj Halberg)
The cabbage palmetto (Sabal palmetto), also known as blue palmetto, Carolina palmetto, or swamp cabbage, is a palm species, which may reach a height of 20 m. It is native to the south-eastern United States and the northern part of the Caribbean, including Cuba and the Bahamas.

Winter morning sky behind cabbage palmettos, Big Cypress National Preserve, Florida. (Photo copyright © by Kaj Halberg)
Members of the genus Connochaetes are variously called wildebeest or gnu. The generic name is derived from the Greek konnos (‘beard’) and khaite (‘flowing hair’ or ‘mane’), alluding to the long, flowing beard of these animals. The name wildebeest is Afrikaans for ‘wild cow’, whereas gnu is the Khoikhoi name for these antelopes.

Five subspecies of the blue wildebeest (Connochaetes taurinus), also called brindled gnu, are distributed from southern Kenya southwards through eastern Africa to central Zambia, and from southern Angola and Zambia southwards to South Africa and Mozambique. The specific name means ‘bull-like’, derived from the Greek tauros (‘bull’), whereas the prefix blue refers to the bluish sheen of the coat.

The western white-bearded wildebeest, ssp. mearnsi, is found in southern Kenya and northern Tanzania, west of the Rift Valley, westwards to Lake Victoria. This subspecies undertakes a spectacular annual migration, where 2 or 3 million wildebeest migrate from the Serengeti Plains northwards to southern Kenya, and later vice versa.

The landscape around the town of Shigatse, southern Tibet, is very dry and desert-like. The river valleys, however, do receive some moisture from the morning fog, as seen in this picture. (Photo copyright © by Kaj Halberg) 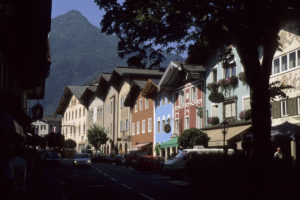 Dawn in a residential area, Sultanahmet, Istanbul, Turkey. (Photo copyright © by Kaj Halberg)
The sycamore maple (Acer pseudoplatanus) is native to Central Europe. It was introduced to Britain around 1500, and has also become naturalized in other parts of Europe, and in Australia, New Zealand, and North America. In many places, it is regarded as an invasive, easily spreading by its winged seeds, which are produced in the tens of thousands on a single large tree.

An example of the effective spreading of this species is seen on the island of Vorsø, a nature reserve in Horsens Fjord, Denmark. On this island, former fields were abandoned in two steps, in 1928 and in 1978. In both cases, thousands of sycamore maple seeds, stemming from a few trees in plantations at the edge of the fields, were spread by the wind. The succession growth of these maple forests is described in detail on the page Nature Reserve Vorsø: Expanding wilderness.

Sunrise and clouds behind eucalyptus trees, Ncheta Island, Bangweulu Swamps, northern Zambia. These exotic trees were planted on this island, which was devoid of trees, as a source of timber and firewood. (Photo copyright © by Kaj Halberg) 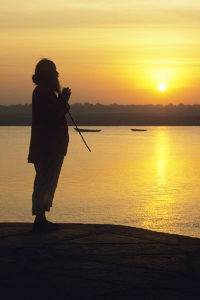 Hindu Brahmin, greeting the sun at dawn on the shore of the sacred Ganges River, Varanasi, India. – Hinduism, and the Ganges River, are described in depth on the page Religion: Hinduism. (Photo copyright © by Kaj Halberg)
Ocotillo (Fouquieria splendens) is a strange bush, which grows in dry areas of south-western United States and northern Mexico. Most of all, the stems of this species resemble dry sticks, to which barb-wire has been attached. It is able to grow leaves, and discard them again, up to ten times in a year – an adaptation to prevent excessive loss of water through evaporation during dry periods. In spring, it displays an abundance of beautiful, bright red flowers, which are often pollinated by hummingbirds. 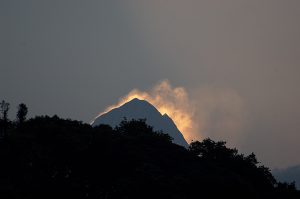 Clouds and condensed exhaust from a jet plane are reddened by the rising sun, Jutland, Denmark. (Photo copyright © by Kaj Halberg)

Early in the morning, sunshine is beginning to penetrate fog near the town of Weining, Guizhou Province, China. (Photo copyright © by Kaj Halberg) 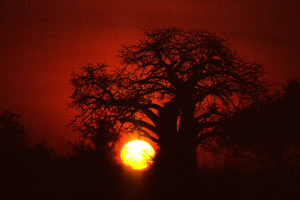 Sunrise behind a giant baobab (Adansonia digitata), Tarangire National Park, Tanzania. This species is described on the page Plants: Ancient and huge trees. (Photo copyright © by Kaj Halberg)
Common ash (Fraxinus excelsior), of the olive family (Oleaceae), is a native of Europe, eastwards to the Caucasus and the Alborz Mountains in northern Iran. It has also become naturalized a few places in New Zealand, the United States, and Canada.

In later years, populations of this species have been much reduced by ash dieback, a disease caused by a fungus, Hymenoscyphus fraxineus, previously called Chalara fraxinea. Most trees that contract this disease die after a few years. However, research has shown that some trees may have resistance to it. 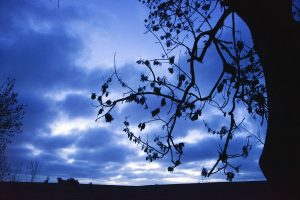 The day is dawning behind an old ash, displaying an abundance of fruits, Funen, Denmark. (Photo copyright © by Kaj Halberg)
The doum palm (Hyphaene thebaica) differs from most other palms in that the trunk is branched, with a fan of leaves at the end of each branch. This species is distributed across the African Sahel zone, and in East Africa, from northern Tanzania northwards to Egypt, and also in Israel, Jordan, and the Arabian Peninsula. 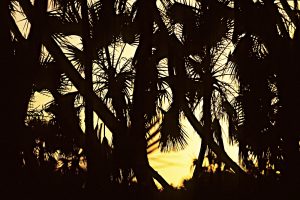