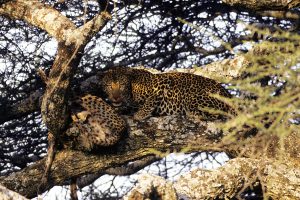 Illuminated by the setting sun, this leopard in Serengeti National Park, Tanzania, is eating his cousin, a cheetah. (Photos copyright © by Kaj Halberg)
”A black shadow dropped down into the circle. It was Bagheera the Black Panther, inky black all over, but with the panther markings showing up in certain lights like the pattern of watered silk. Everybody knew Bagheera, and nobody cared to cross his path, for he was as cunning as Tabaqui [the jackal], as bold as the wild buffalo, and as reckless as the wounded elephant. But he had a voice as soft as wild honey dripping from a tree, and a skin softer than down.”
– Rudyard Kipling (1865-1936), English writer, in his novel Jungle Book, 1894
The leopard (Panthera pardus) is a large cat with a beautiful yellowish coat, dotted with numerous black spots and rosettes. Some leopards, often called panthers, are a very dark shade of blackish-brown, with very faint rosettes.
An adaptable species
This species has a very wide distribution, from Ussuriland in south-eastern Russia southwards through parts of China and Southeast Asia to Indonesia, and thence westwards through the Indian Subcontinent to the Middle East, and most of sub-Saharan Africa. It has adapted to a huge variety of habitats, from tropical jungles to semi-desert and mountains, and even farmland near villages.

The leopard eats a wide variety of prey, including deer and antelope, hares, wild boar (Sus scrofa) and warthog (Phacochoerus africanus), and even other members of the cat family, such as serval (Leptailurus serval) and wild cat (Felis silvestris).

I even once saw a leopard in Tanzania, feeding on a cheetah (Acinonyx jubatus), a cat which is almost as big as itself. A cheetah can easily outrun a leopard, so either this particular cheetah was wounded, or the leopard surprised it by jumping on it from a tree. Near villages, leopards often kill cattle, sheep, goats, and dogs. 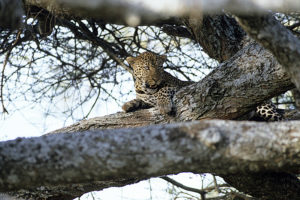 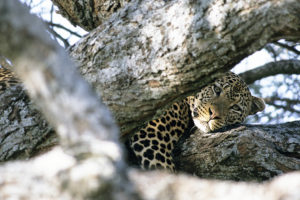 Leopard, resting in an acacia, Serengeti National Park, Tanzania. (Photos copyright © by Kaj Halberg)
Dragging its prey into safety
Leopards are excellent climbers. Usually, they drag their prey up into a tree, where they can enjoy their meal in peace, out of reach of lions (Panthera leo) and spotted hyenas (Crocuta crocuta). If the prey is too large to be dragged up a tree, these animals will often chase away the leopard and eat its prey.

While she is away hunting, a mother leopard will hide her kittens in a patch of dense grass or another safe place, to avoid them being eaten by predators. As soon as the kittens are large enough to climb, they take shelter in a tree, where they are safe from most predators. 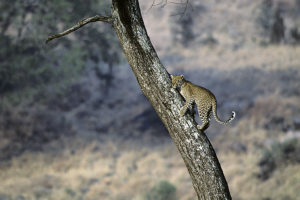 This mother leopard is climbing a tree, in which her kitten is feeding, Tarangire National Park, Tanzania. (Photo copyright © by Kaj Halberg) 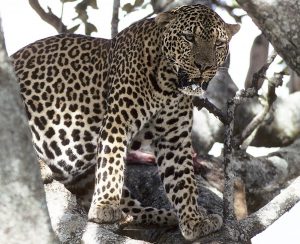 This large male leopard is panting heavily, satiated after feeding on a white-bearded wildebeest (Connochaetes mearnsi), which he had dragged up into a sausage tree (Kigelia africana). – Serengeti National Park, Tanzania. (Photo copyright © by Kaj Halberg)
The man-eating leopard of Rudraprayag
In India, there are many horror stories of leopards eating people. Old or injured leopards sometimes become man-eaters, because they are not able to kill their natural prey. Humans are slow and weak, thus being easy prey. The man-eating habit may also evolve during periods of epidemic diseases, where so many people die that they are not properly cremated, which may attract scavengers like the leopard.

In his book The Man-eating Leopard of Rudraprayag, the famous hunter, writer, and conservationist Jim Corbett (1875-1955) relates his hair-raising adventures, when he, between 1918 and 1926, was trying to rid the people of Garhwal, Uttarakhand, of the infamous man-eating leopard of Rudraprayag, a terrible animal, which killed 125 people, before Corbett managed to shoot it.

The following extract from his book gives a vivid picture of the terror, caused by this leopard among the hill people:

“Twenty pilgrims, toiling up the road to Badrinath [a sacred shrine on the Ganga River], arrived towards evening at a small roadside shop. After the shopkeeper had met their wants, he urged them to be on their way, telling them there was only just sufficient daylight left for them to reach the pilgrim shelters four miles farther up the road, where they would get food and safe shelter.

The pilgrims were unwilling to accept this advice; they said they had done a long march that day and were too tired to walk another four miles, and that all they wanted were facilities to prepare and cook their evening meal, and permission to sleep on the platform adjoining the shop. To this proposal, the shopkeeper vigorously objected. He told the pilgrims that his house was frequently visited by the man-eater, and that to sleep out in the open would be to court death.

While the argument was at its height, a sadhu [holy man] on his way from Mathura to Badrinath arrived on the scene and championed the cause of the pilgrims. He said that if the shopkeeper would give shelter to the women of the party he would sleep on the platform with the men, and if any leopard – man-eater or otherwise – dared to molest them he would take it by the mouth and tear it in half.

To this proposal, the shopkeeper had perforce to agree. So, while the ten women of the party took shelter in the one-roomed shop behind a locked door, the ten men lay down in a row on the platform, with the sadhu in the middle.

When the pilgrims on the platform awoke in the morning, they found the sadhu missing, the blanket on which he had slept rumpled, and the sheet he had used to cover himself with partly dragged off the platform and spotted with blood. At the sound of the men’s excited chattering the shopkeeper opened the door, and at a glance saw what had happened. When the sun had risen, the shopkeeper, accompanied by the men, followed the blood trail down the hill and across three terraced fields, to a low boundary wall; here, lying across the wall, with the lower portion of his body eaten away, they found the sadhu.”

During his efforts to kill the leopard, Corbett himself and his friend Ibbotson had a close escape from the cunning animal:
“When sufficient light for me to shoot by had long since gone (…) we heard the leopard coming stealthily down towards the tree. It was then time to take action, so I asked Ibbotson to take my place, while I retrieved the lamp. (…) It gave a brilliant light but, with its long body and longer handle, was not designed to be used as a lantern in a jungle. (…) We set off, Ibbotson leading [with the lamp] and I following with both hands on my rifle.

Fifty yards from the tree, while climbing over a rock, Ibbotson slipped, the base of the lamp came in violent contact with the rock, and the mantle fell in dust to the bottom of the lamp. The streak of blue flame directed from the nozzle on to the petrol reservoir gave sufficient light for us to see where to put our feet, but the question was how long we should have even this much light. Ibbotson was of the opinion that he could carry the lamp for three minutes before it burst. Three minutes, in which to do a stiff climb of half a mile, over ground on which it was necessary to change direction every few steps to avoid huge rocks and thorn bushes, and possibly followed – and actually followed as we found out later – by a man-eater, was a terrifying prospect.

(…) When we eventually reached the footpath, our troubles were not ended, for the path was a series of buffalo wallows. (…) Alternately slipping on wet ground and stumbling over unseen rocks, we at last came to some stone steps which took off from the path and went up to the right. Climbing these steps, we found a small courtyard, on the far side of which was a door. We had heard the gurgling of a hookah [water pipe] as we came up the steps, so I kicked the door and shouted to the inmates to open. As no answer came, I took out a box of matches and shook it, crying that if the door was not opened in a minute, I would set the thatch alight. On this an agitated voice came from inside the house, begging me not to set the house on fire. (…) A minute later, first the inner door and then the outer door was opened, and in two strides Ibbotson and I were in the house, slamming the inner door, and putting our backs to it.

There were some twelve or fourteen men, women, and children of all ages in the room. When the men had regained their wits after the unceremonious entry, they begged us to forgive them for not having opened the doors sooner, adding that they and their families had lived so long in terror of the man-eater that their courage had gone. Not knowing, what form the man-eater might take, they suspected every sound they heard at night. In their fear, they had our full sympathy, for from the time Ibbotson had slipped and broken the mantle, and a few minutes later had extinguished the red-hot lamp to prevent it bursting, I had been convinced that one, and possibly both, of us would not live to reach the village.”

“I had been convinced that one, and possibly both, of us would not live to reach the village.” – Leopard, Chief’s Island, Okawango, Botswana. (Photo copyright © by Kaj Halberg)
The leopard in Sri Lanka
In former days, the leopard was fairly common in Sri Lanka, and, as opposed to the leopards in India, it had no competition from the tiger (Panthera tigris), as the latter is not found in Sri Lanka. However, due to loss and fragmentation of its habitat, and to some degree also poaching, the population has declined dramatically over the last fifty years. In 2015, it was estimated that between 700 and 950 leopards were living in the wild on the island. 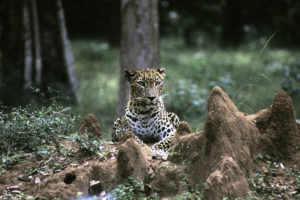 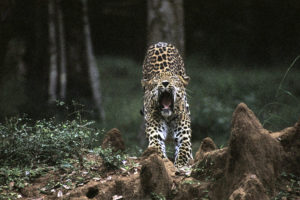