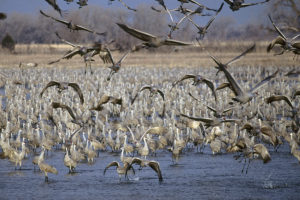 Emitting an incredible crescendo of trumpeting, sandhill cranes take flight from the Platte River, flock after flock heading for the surrounding maize fields to feed on waste kernels. (Photo copyright © by Kaj Halberg)
On a cold March morning, before dawn, a dozen warmly clad people walk behind their guide down a path, which leads to a large blind on the shore of the Platte River, central Nebraska, United States.

From out in the river, we hear a huge chorus of trumpeting sandhill cranes (Grus canadensis), but the birds themselves can barely be seen, roosting on sand bars in the river, only about a hundred metres away.

As the rays of the rising sun begin to penetrate the morning mist, the birds take shape, and a fantastic scenery unrolls in front of us. In the shallow waters of the river, about 50,000 cranes are standing shoulder by shoulder. Their trumpeting now intensifies, and the birds begin to shift restlessly, a few performing their graceful dance.

Then, emitting an incredible crescendo of trumpeting, the birds take flight, flock after flock heading for the surrounding maize fields, where they eat waste kernels, left over from the harvest. For this reason, farmers consider the cranes beneficial, as sprouted maize kernels from the previous year are regarded as weeds.

In the pre-dawn darkness, the cranes could barely be seen. (Photo copyright © by Kaj Halberg) 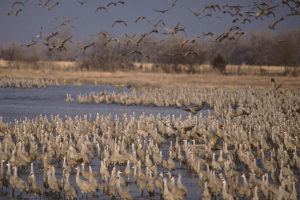 As the rays of the rising sun began to penetrate the morning mist, the birds took shape, and a fantastic scenery unrolled in front of us. (Photo copyright © by Kaj Halberg)
Successful species
Every year, during their spring migration in March and April, huge flocks of sandhill cranes roost here for a few weeks before continuing to their breeding grounds in swamps and lakes further north.

In former days, the cranes would roost in many prairie rivers, but the majority of these rivers are today regulated by dams, causing most of the sandbars, on which the birds roost, to be either submerged, or covered in dense vegetation, such as willows, because the sandbars are no longer inundated by spring flooding. Along the Platte River, much work is done to clear these thickets, causing about 80% of the world population of sandhill cranes to roost here.

This is the most numerous crane species in the world, numbering more than 700,000, and the population is still increasing, undoubtedly because the cranes have easy access to waste maize. 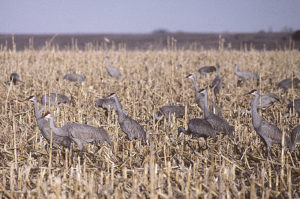 Farmers consider sandhill cranes beneficial, because sprouted maize kernels from the previous year are regarded as weeds. (Photo copyright © by Kaj Halberg)
Five subspecies
Today, five subspecies of this bird are recognized: canadensis, which breeds in eastern Siberia, Alaska, and northern Canada. It is the most abundant of the subspecies, comprising about 500,000 birds; tabida, which breeds in southern Canada, and northern and western U.S.; pratensis, which is found in Florida and the southernmost part of Georgia; pulla, which is restricted to the south-eastern corner of the State of Mississippi; and, finally, nesiotes, which is only found on Cuba.

A sixth subspecies, rowani, is no longer accepted, and some authorities only acknowledge two subspecies, canadensis and tabida. The populations in Mississippi and on Cuba are very small and threatened with extinction. 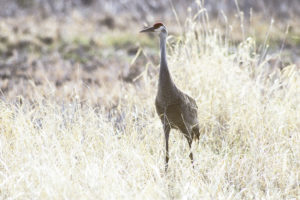 The cranes are omnivorous, eating whatever they can find: roots and other vegetable matter, insects, mice, and eggs and young of birds.

In later years, several Siberian wader species have declined drastically, mainly due to habitat destruction on their flyways between breeding and wintering grounds. In China, Korea, and Vietnam, huge areas of coastal shallow waters have been converted into shrimp farms, salt pans, or fields – areas, which the migrating waders were dependent on for fattening up, before continuing to their breeding grounds.

Many waders are now in a poor condition, when they arrive in Arctic Siberia, which means that they produce fewer young – or simply skip breeding. Thus, production of chicks has plummeted in many species, and one species, the spoon-billed sandpiper (Eurynorhynchus pygmeus), is critically endangered, with less than a hundred breeding pairs.

Under these circumstances, marauding sandhill cranes really make a difference, and the beautiful birds have become a threat to Siberian breeding waders. 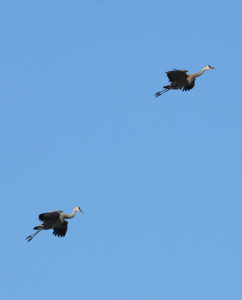 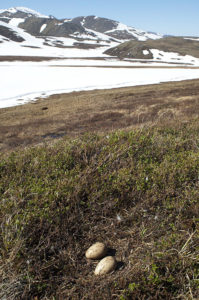