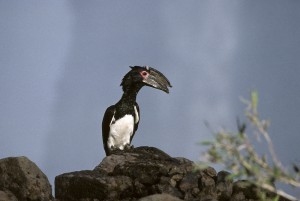 Trumpeter hornbill (Bycanistes bucinator), sitting on a rock in front of Victoria Falls, or Mosi-oa-Tunya (’The Smoke that Thunders’), Zambezi River, Zimbabwe. (Photo copyright © by Kaj Halberg)
Hornbills, of the family Bucerotidae, are found in tropical Asia and Africa, comprising 55-59 species. The scientific family name, and the name of the type genus, Buceros, is derived from the Greek bous (‘cow’) and keras (‘horn’), referring to a peculiar protuberance, or casque, on the bill of most species. Hornbills are very noisy, and the casque is probably a means to increase the volume of their call, which carries quite a distance.

Hornbills often call simultaneously, like these silvery-cheeked hornbills (Bycanistes brevis), gathered in a tree, Lake Manyara National Park, Tanzania. (Photo copyright © by Kaj Halberg)
Hornbills vary greatly in size, from the small West African black dwarf hornbill (Horizocerus hartlaubi), which is 30 cm long and weighs only c. 100 grams, to the huge rhinoceros hornbill (Buceros rhinoceros) in Malaysia and Indonesia, and the southern ground-hornbill (Bucorvus leadbeateri) in Africa, both measuring c. 1.2 m long, and the ground-hornbill weighing up to 6.2 kilos.

Another larger species is the grey-cheeked hornbill (Bycanistes subcylindricus), also known as the black-and-white-casqued hornbill, which lives in rainforests. It has a patchy distribution in sub-Saharan Africa, from Guinea eastwards to western Kenya, with an isolated population in north-eastern Angola.

This rhinoceros hornbill was encountered on Sumatra. (Photo copyright © by Kaj Halberg) 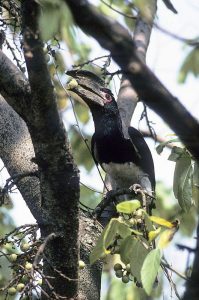 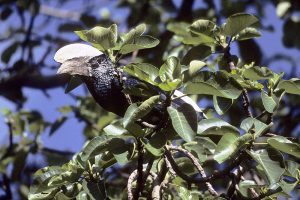 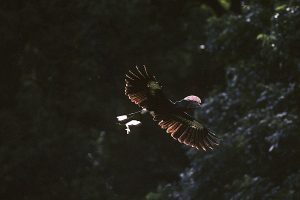 Silvery-cheeked hornbill, catching swarming termites, Lake Manyara National Park, Tanzania. (Photo copyright © by Kaj Halberg)
Peculiar breeding strategy
Hornbills nest in hollow trees and are thus dependent on old growth forests. For this reason, many species have declined alarmingly during the last hundred years or so, as ever-increasing areas of tropical forests have been cleared by humans.

The breeding strategy of hornbills is very peculiar. When the female has laid her eggs inside a hollow tree, she will plaster the nest hole from inside, using her own guano which hardens in the air. Sometimes the male will help plastering the hole by bringing clay to the nest. This plaster makes it difficult for enemies like monkeys to eat eggs and young. Only a small opening is left, through which the male feeds the female during the entire incubation period. In some species, the female breaks the plaster, when the young are half grown, and then help the male feed the young – which will plaster the hole with their own guano when their mother has left! In other species, the female remains in the nest, until the young are full-grown. Meanwhile, the male brings food to all of them.

Tokos
In Africa, there is a bewildering array of small hornbills of the genera Tockus and Lophoceros, in several languages called tokos.
Previously, all red-billed hornbills were regarded as a single species, Tockus erythrorhynchus. However, following recent genetic studies, some researchers claim that it should be split into five separate species, whereas authorities, including the IUCN Red List of Threatened Species 2016, and Handbook of the Birds of the World (Lynx Editions), still consider these birds as belonging to a single species. The five species/subspecies are as follows:

The northern red-billed hornbill (Tockus (e.) erythrorhynchus) is found from southern Mauritania eastwards to Eritrea and Somalia, and thence southwards to Kenya and northern Tanzania.

The western red-billed hornbill (T. (e.) kempi) is distributed from southern Mauritania through Senegal and Gambia to western Mali.

The southern red-billed hornbill (T. (e.) rufirostris) is found from Angola and Namibia eastwards to Zambia, and thence south to north-eastern South Africa. 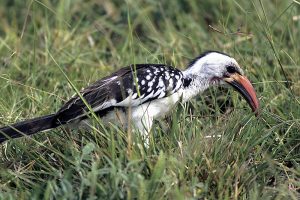 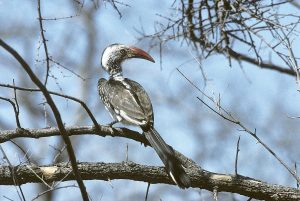 Southern red-billed hornbill, Matobo National Park, Zimbabwe. (Photo copyright © by Kaj Halberg)
The southern yellow-billed hornbill (Tockus leucomelas) is distributed from Angola and Namibia eastwards across Botswana and northern South Africa to extreme southern Zambia and Mozambique. Besides its bright yellow bill, it may be identified by the pinkish skin around the eye and beneath the bill. 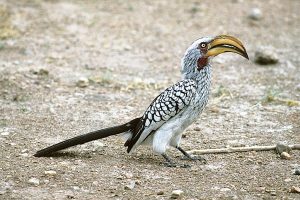 Southern yellow-billed hornbill, photographed on a campground in Etosha National Park, Namibia. – This park and other fantastic natural areas in Namibia are presented on the page Countries and places: Namibia – a desert country. (Photo copyright © by Kaj Halberg) 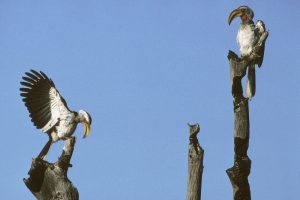 A pair of southern yellow-billed hornbills, greeting each other in the morning sun, Matobo National Park, Zimbabwe. (Photo copyright © by Kaj Halberg) 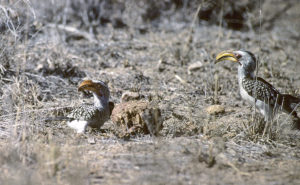 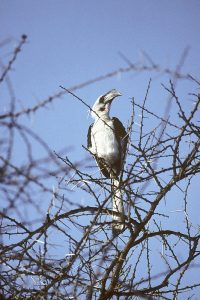 Female von der Decken’s hornbill, Awash National Park, Ethiopia. The female has a black bill, whereas the male has a red bill with an ivory-coloured tip. (Photo copyright © by Kaj Halberg)
Jackson’s hornbill (Tockus jacksoni) closely resembles von der Decken’s hornbill, but has dense white spots on the wing-coverts. It is restricted to a rather small area in south-eastern South Sudan, south-western Ethiopia, north-eastern Uganda, and north-western Kenya. The population is decreasing.

The name of this species was given in honour of Sir Frederick John Jackson (1860-1929), an English administrator, explorer, and ornithologist, who lived in Kenya. 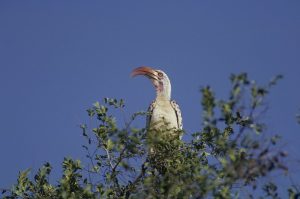 Male Jackson’s hornbill, Lake Baringo, Kenya. This individual has a very pale head. Usually, males have a dark smudge around the eye. (Photo copyright © by Kaj Halberg)
Formerly, the following two species were included in the genus Tockus, but have recently been moved to a separate genus, Lophoceros.
The African grey hornbill (Lophoceros nasutus) has a very wide distribution in sub-Saharan Africa, from southern Mauritania and Senegal eastwards to the Red Sea coast, and thence southwards through Ethiopia, Uganda, Kenya, and Tanzania to southern Angola and eastern Namibia eastwards to Mozambique and north-eastern South Africa. It is also found on the Arabian Peninsula, in a belt along the Red Sea coast. It lives in open woodland and savanna. The male has black bill, whereas that of the female is blackish, often with reddish or yellowish parts. Both sexes have a conspicuous white stripe on the upper mandible. 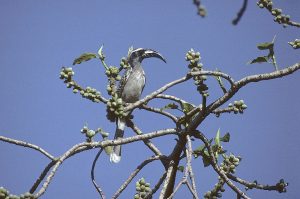 Male African grey hornbill, observed near the Blue Nile, Ethiopia. (Photo copyright © by Kaj Halberg)
Hemprich’s hornbill (Lophoceros hemprichii) is mainly an Ethiopian bird, but is also found in southern Eritrea, northern Kenya, and along the Somalian Red Sea coast. It lives in shrubland, forests, and rocky areas, often near water. The sexes are quite similar, but the female has paler red bill than the male.

This bird was named in honour of German naturalist and explorer Wilhelm Friedrich Hemprich (1796-1825), who travelled extensively in Egypt, Sudan, and Ethiopia. He died of malaria in Ethiopia, only 29 years old. 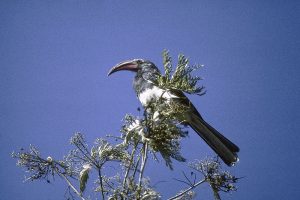 Female Hemprich’s hornbill, Yabello, southern Ethiopia. (Photo copyright © by Kaj Halberg)
The genus Ocyceros was established in 1873 by English naturalist Allan Octavian Hume (1829-1912), encompassing smaller hornbills of the Indian Subcontinent. Later, these hornbills were transferred to the genus Tockus, but have recently been moved back to Ocyceros.
The Indian grey hornbill (Ocyceros birostris) is distributed from north-eastern Pakistan (around Lahore), eastwards south of the Himalaya, to western Bangladesh, and thence southwards through almost the entire Indian Peninsula, from the lowlands up to about 700 m altitude. The male has a dark bill with a yellowish lower mandible, whereas that of the female is more yellow. 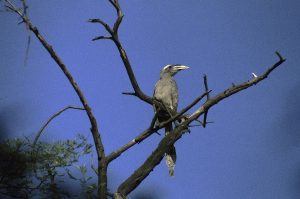 Female Indian grey hornbill, Keoladeo National Park, Rajasthan. (Photo copyright © by Kaj Halberg)
The Malabar grey hornbill (Ocyceros griseus) is an Indian endemic, found along the entire West Ghats, from north of Mumbai to the southern tip of the peninsula. This species has no casque. The male has a reddish bill with a yellow tip, whereas that of the female is yellowish with black at the base of the lower mandible. 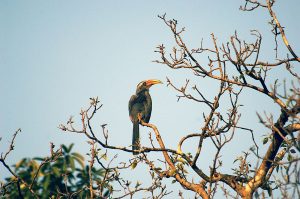 Male Malabar grey hornbill in morning light, Mahaveer Wildlife Sanctuary, Goa. (Photo copyright © by Kaj Halberg)
Ground-hornbills
Two species of hornbill, the huge ground-hornbills, differ quite a lot from other hornbills, mainly in their feeding habit, as they spend most of their time on the ground, searching for prey like lizards, snakes, and larger insects. Their habitat is grasslands with short vegetation and scattered trees, in which they nest. 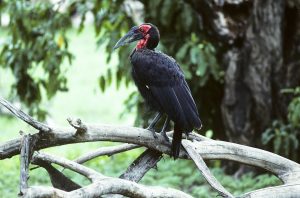 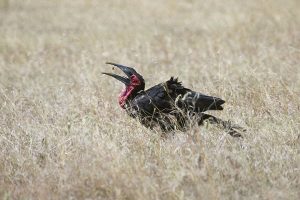 This southern ground-hornbill, observed in Serengeti National Park, Tanzania, is swallowing a beetle or some other insect. (Photo copyright © by Kaj Halberg) 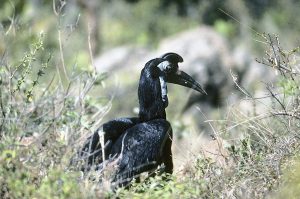 Abyssinian ground-hornbill, photographed near the Genale River, Ethiopia. It differs from the southern species by its blue wattles. (Photo copyright © by Kaj Halberg)
Hornbills and people
Throughout their distribution area, hornbills used to play an important role in tribal mythology, and their casque and feathers were widely used as ornaments. The casque of the helmeted hornbill (Rhinoplax vigil) of Southeast Asia is very heavy. Known as ho-ting, it is much praised by the Chinese, utilized for carving. Hornbill heads are often used as an ingredient in traditional Asian medicine.
In the picture below, from Sarawak, Borneo, a young woman of the Punan people is performing a dance, with fans of hornbill feathers attached to her wrists. – My adventures among Punans are described on the page Travel episodes – Borneo 1975: Canoe trip with Punan tribals. 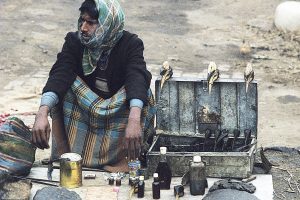 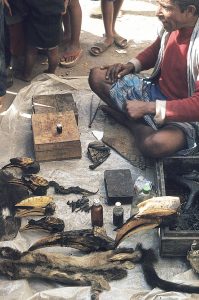 These street vendors in Kathmandu, Nepal, have displayed some of their goods, utilized as ingredients in traditional medicine, such as heads of hornbills and ibises, scorpions, and dried lizards. (Photos copyright © by Kaj Halberg)
In tourist areas, hornbills often become remarkably tame. 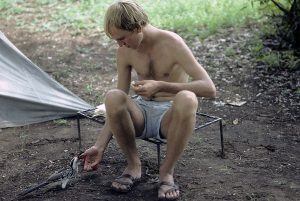 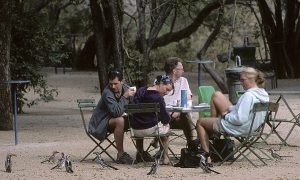