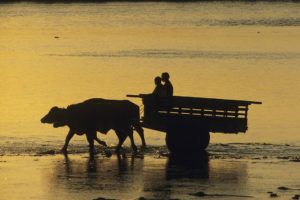 At sunset, this cart, pulled by buffalos, is crossing the Rapti River, southern Nepal. (Photo copyright © by Kaj Halberg) 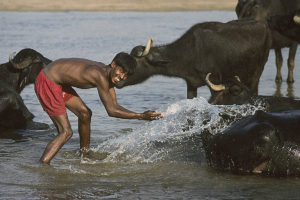 This man is washing his buffalos in a river near Bodhgaya, Bihar, India. (Photo copyright © by Kaj Halberg)
“(Mowgli) put his hands to his mouth and shouted down the ravine – it was almost like shouting down a tunnel – and the echoes jumped from rock to rock.

After a long time there came back the drawling, sleepy snarl of a full-fed tiger just wakened.

“Who calls?” said Shere Khan, and a splendid peacock fluttered up out of the ravine screeching.

“I, Mowgli. Cattle thief, it is time to come to the Council Rock! Down – hurry them down, Akela! Down, Rama, down!”

The herd [of buffaloes] paused for an instant at the edge of the slope, but Akela gave tongue in the full hunting-yell, and they pitched over one after the other, just as steamers shoot rapids, the sand and stones spurting up round them. Once started, there was no chance of stopping, and before they were fairly in the bed of the ravine Rama winded Shere Khan and bellowed.

“Ha! Ha!” said Mowgli, on his back. “Now thou knowest!” and the torrent of black horns, foaming muzzles, and staring eyes whirled down the ravine just as boulders go down in floodtime; the weaker buffaloes being shouldered out to the sides of the ravine where they tore through the creepers. They knew what the business was before them – the terrible charge of the buffalo herd against which no tiger can hope to stand. Shere Khan heard the thunder of their hoofs, picked himself up, and lumbered down the ravine, looking from side to side for some way of escape, but the walls of the ravine were straight and he had to hold on, heavy with his dinner and his drink, willing to do anything rather than fight. The herd splashed through the pool he had just left, bellowing till the narrow cut rang. Mowgli heard an answering bellow from the foot of the ravine, saw Shere Khan turn (the tiger knew if the worst came to the worst it was better to meet the bulls than the cows with their calves), and then Rama tripped, stumbled, and went on again over something soft, and, with the bulls at his heels, crashed full into the other herd, while the weaker buffaloes were lifted clean off their feet by the shock of the meeting. That charge carried both herds out into the plain, goring and stamping and snorting. Mowgli watched his time, and slipped off Rama’s neck, laying about him right and left with his stick.

“Quick, Akela! Break them up. Scatter them, or they will be fighting one another. Drive them away, Akela. Hai, Rama! Hai, hai, hai! my children. Softly now, softly! It is all over.”

Akela and Grey Brother ran to and fro, nipping the buffaloes’ legs, and though the herd wheeled once to charge up the ravine again, Mowgli managed to turn Rama, and the others followed him to the wallows.

Shere Khan needed no more trampling. He was dead, and the kites were coming for him already.”

– Rudyard Kipling (1865-1936), English writer, in his novel Jungle Book, 1894
The wild water buffalo (Bubalus arnee ssp. arnee) is native to the Indian Subcontinent and Southeast Asia. It has been declining drastically for hundreds of years, and today there may be as few as c. 3,400 individuals left, of which about 90% live in India, mainly in Assam.

Wild buffalos were domesticated about 5,000 years ago, and through selective breeding they have become the docile beasts that we today see working in the paddy fields, or pulling heavily loaded carts.

The difference between the domestic water buffalo and its wild cousin mainly lies in the shape of the horns, which in the wild form are massive, spreading out sideways almost horizontally, only curving at the tip, whereas the horns of the domestic form are smaller, curved almost from the base.

Two types of domestic water buffalo are recognized, the so-called river buffalo (Bubalus arnee ssp. bubalis) of the Indian Subcontinent, the Middle East, and the Balkans, and the swamp buffalo (Bubalus arnee ssp. carabanesis), found from central China southwards to Southeast Asia and Assam in India. DNA studies indicate that the river buffalo was probably domesticated in India about 5,000 years ago, and the swamp buffalo probably in China about 4,000 years ago. Research has revealed that Indus Valley traders brought water buffalos to Mesopotamia about 2500 B.C.

Today, domesticated water buffalo are found in most hot countries of the world, and numbers may exceed 130 million. Their milk is richer and contains more fat than that of cattle, and their ability to pull the plough through rice fields surpasses that of any other animal.

Nowadays, the wild water buffalo is restricted to very few places in Asia, with the largest concentration in Kaziranga National Park, Assam, India, where this picture was taken. The bird is an eastern cattle egret (Bubulcus coromandus). (Photo copyright © by Kaj Halberg) 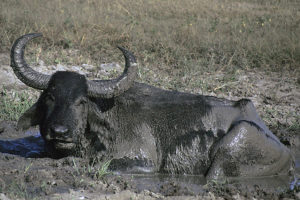 Traditionally, the water buffalos which live in Yala National Park and other wildlife sanctuaries in Sri Lanka, are regarded as wild buffalos, but they probably descend from feral domestic buffalos, as their horns are smaller than those of the genuine wild buffalos of Assam. (Photo copyright © by Kaj Halberg)

As its name implies, the water buffalo spends much time in water. This buffalo in Hampi, Karnataka, South India, is enjoying a bath, while chewing the cud. (Photo copyright © by Kaj Halberg)

Buffalos, grazing in a waterhole, Keoladeo National Park, Rajasthan, India. This grazing is beneficial to the reserve, as it prevents vegetation from clogging the waterholes. The white birds are eastern cattle egrets (Bubulcus coromandus), and various duck species are feeding in the background. (Photo copyright © by Kaj Halberg)

These buffalos, which are passing through a narrow alley in the city of Varanasi, Uttar Pradesh, India, hardly leave space for people. (Photo copyright © by Kaj Halberg)

The ability of the water buffalo to pull the plough through rice fields surpasses that of any other animal. – Aliwetawela, east of Badulla, Sri Lanka. (Photo copyright © by Kaj Halberg)

This buffalo cow and her calf are for sale at a market in Sonpur, Bihar, India. Oil has been applied to their body, making them look more attractive to buyers. (Photo copyright © by Kaj Halberg) 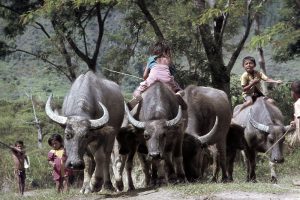 These Batak tribal children have fun, bringing home water buffaloes after work in the paddy fields, Samosir Island, Sumatra, Indonesia. (Photo copyright © by Kaj Halberg)
Research has revealed that Indus Valley traders brought water buffalos to Mesopotamia about 2500 B.C., and even today, many farmers along the marshlands of southern Iraq raise buffalos. This interesting wetland is described on the pages Travel episodes – Iraq 1973: The hospitable mudir, and Iraq 1973: Dust storm and sheep’s head.

This buffalo is swimming across a channel in the marshes of southern Iraq. (Photo copyright © by Kaj Halberg)
The Daoist Shueisian Temple near Beigang, western Taiwan, which dates back to 1780, is dedicated to Da Yu (Yu the Great), who lived in China during the Xia Dynasty (c. 2700-1600 B.C.). He managed to stop the great annual flooding of the Yellow River by building canals. Later, Daoists regarded him as a deity.

Daoism is described in depth on the page Religion: Daoism in Taiwan. 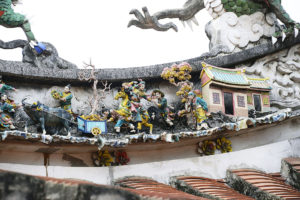 Detail of the Shueisian Temple, depicting a rural scene with a buffalo cart. (Photo copyright © by Kaj Halberg)
In Hindu mythology, Mahishasura was a powerful demon, who threatened the power of the gods, and not even the mighty gods Vishnu and Shiva could resist him. Then Durga, Shiva’s shakti (female energy), took action. Riding on her lion, she attacked Mahishasura, who first changed into a huge buffalo, then into a lion. Durga sliced off his head, but he then changed into an elephant, whereupon Durga cut off his trunk. The demon hurled large mountains at the goddess, but, nevertheless, she managed to kill him with her spear.

You may read more about Hindu gods on the page Religion: Hinduism. 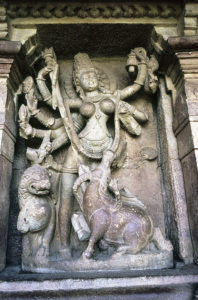 This sculpture in the great temple near Aihole, Karnataka, South India, depicts Durga, riding on her lion, battling against Mahishasura, here in the shape of a buffalo. (Photo copyright © by Kaj Halberg)
Why the water buffalo has so little hair
Most water buffalos have very scanty fur on their bodies. According to a Nepalese legend, it happened in this way:

In the old days, the water buffalo and the yak were the best of friends. They both very much appreciated salt, but, sadly, this commodity was rather scarce. The yak volunteered to go into Tibet to look for salt, but before leaving he asked the water buffalo, if he could borrow his fur, so that he could keep warm in the fierce cold on the high Tibetan plateau. The buffalo readily agreed to this, and off the yak went, clad in a double layer of fur.

The buffalo waited and waited, but the yak never returned. Still today, the buffalo is often looking towards the high mountains in the north to see, when its friend will return with the salt and the borrowed fur.

The yak is described in detail on the page Animals as servants of Man: Cattle. 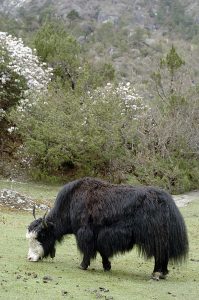 “Before leaving, the yak asked the water buffalo, if he could borrow his fur, to keep warm in the fierce cold on the high Tibetan plateau.” – Grazing yak, Ghunsa Valley, eastern Nepal. (Photo copyright © by Kaj Halberg) 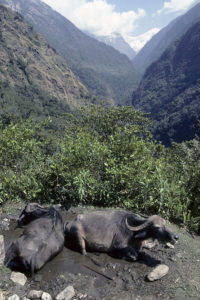 “Still today, the water buffalo is often looking towards the high mountains in the north to see, when its friend will return with the salt and the borrowed fur.” – These water buffaloes are enjoying a mud bath in the Modi Khola Valley, Annapurna, central Nepal. (Photo copyright © by Kaj Halberg)
(Uploaded September 2017)
(Latest update May 2020)
Text & photographs © Kaj Halberg, 2015. All rights reserved. Contact: respectnature108@gmail.com