I asked the owner of this little terrier in Taichung, Taiwan, why it was wearing sunglasses. She said that it was to prevent the dog from getting cataract. (Photo copyright © by Kaj Halberg)

This dog is inspecting girls, dressed in their finery for a dancing performance at a Hindu temple festival near Ubud, Bali, Indonesia. (Photos copyright © by Kaj Halberg)

This miniature pinscher in Taitung, Taiwan, is warmly dressed as a protection against the ‘winter cold’. The temperature was around 17o Centigrade! (Photo copyright © by Kaj Halberg)
The origin of the domestic dog is a complicated matter. DNA evidence indicates that the dog (Canis lupus familiaris), the modern grey wolf (C. l. lupus), as well as the now extinct Taimyr wolf (C. l. cf. lupus), all diverged from a now extinct wolf that once lived in Europe. The dog and the present grey wolf form two sister clades, and modern wolves are not very closely related to the wolves that were first domesticated.

According to some archaeologists, the first burial of dogs along with humans took place c. 14,700 years ago, while others maintain that it took place long before that, namely c. 36,000 years ago. Under all circumstances, the archaeological evidence shows that the wolves, which were domesticated by hunter-gatherers, were the first domesticated animal species of all.

This domestication took place at different localities simultaneously, probably in Western Europe, Central Asia, and East Asia. New genetic research points out that an initial wolf population split into East and West Eurasian groups, both of which, before going extinct, were domesticated independently into two distinct dog populations, between 14,000 and 6,400 years ago. The Western Eurasian dog population was partially replaced by East Asian dogs, introduced by humans at least 6,400 years ago. (A list of sources may be seen at en.wikipedia.org/wiki/Origin_of_the_domestic_dog).

Two types of dogs, which descended from the ancestral dog, are so different from other dogs that they have been given subspecific status: the Australian Dingo (C. l. dingo) and the African Basenji (C. l. basenji). They differ from other dogs in that they cannot bark, and they come into oestrus only once a year, as opposed to twice or more annually in other dogs. They also both lack a distinctive body odour.

Genetic evidence indicates that the Dingo originated from East Asian domestic dogs. It was introduced to Australia about 4,000 years ago by seafaring tribes, and today feral populations live in most of the continent, barred from access to the south-eastern part of the country by a so-called ‘dingo fence’. Today, it is the largest terrestrial predator in Australia, as the indigenous thylacine, or Tasmanian wolf (Thylacinus cynocephalus), was extirpated by farmers in the 1900s. Dingos are often a threat to livestock, but at the same time they benefit farmers, as they mainly prey on rabbits, kangaroos, and rats – three major pests in Australian farming.

The Basenji is said to have originated in the Congo Basin in West Africa. Dogs, resembling modern Basenjis are depicted in Egyptian tombs, sitting with pricked ears and tightly curled tails, just as they do today. Dogs of this type were originally kept in Egypt for hunting small game. (Dollman, 1937)

Through their long relationship with humans, dogs have become uniquely attuned to human behaviour, and they are able to thrive on a starch-rich diet that would be inadequate for wild members of the dog family. At least 200 dog breeds are known, varying immensely in size, shape, and colours, from the 300-pound English mastiff to the Chihuahua, which weighs only 1-2 kilograms. Dogs are utilized in countless activities, ranging from companionship and protection to hunting, herding, racing, pulling sledges, rescuing, assisting police and customs, and aiding handicapped people, to mention but a few. No wonder, the dog has been given the sobriquet ‘man’s best friend’.

More pictures of domestic dogs, as well as other members of the dog family, are found elsewhere on this website, see Animals: Dog family. 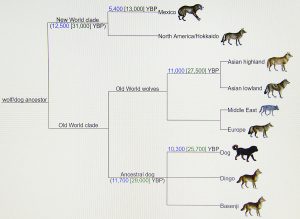 Neolithic people domesticated various species of wolves to assist them when hunting, and possibly also during warfare. This Bronze Age rock carving at Fossum, Bohuslän, Sweden, may depict men in battle, accompanied by dogs. (Photo copyright © by Kaj Halberg)
The gestation period of dogs varies between 58 and 68 days, depending on size. Humans often begin to wean pups, when they are ca. 8 weeks old, but if their mother allows them, pups will suckle much longer.

Usually, dogs and cats are sworn enemies, but if they grow up together, like this cat and wire-haired dachshund, they can be the best of friends. (Photo copyright © by Kaj Halberg)

Well-dressed dog, sleeping on a sidewalk, Bangkok, Thailand. I don’t know what its owner has been thinking, because the temperature was around 30o Centigrade! The snout is just protruding to the left. (Photo copyright © by Kaj Halberg) 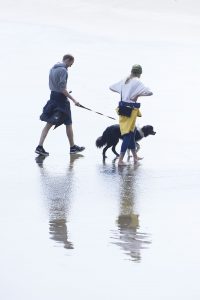 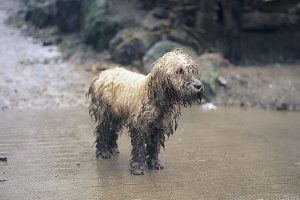 This drenched dog, smeared in mud, was photographed during the hurricane ‘Mitch’, in the town of Todos Santos, Guatemala. (Photo copyright © by Kaj Halberg)

These little dogs clearly enjoy the evening sun from a bench, Bagan, Myanmar. (Photo copyright © by Kaj Halberg)
Dipávali, or Tihar, popularly called Festival of Lights, is a very important Hindu festival, which lasts five days. The second day, Kukur Puja, is dedicated to the dog, which plays an important role in Hinduism, as it guides the souls of the deceased to the god of death, Yama, for judgement. In the morning, the family places a red tika mark on the forehead of the dog, and a malla (a garland of marigolds) is draped around its neck. The dog is worshipped with incense, whereupon huge amounts of food are presented to it, before the family itself eat breakfast.

This dog in the village of Sauraha, southern Nepal, has been adorned during the Dipávali festival. (Photo copyright © by Kaj Halberg)

By September, this herding dog, living near Lake Tso Kar, Ladakh, India, had still not shed its fur from the previous winter, giving it a rather ragged appearance. (Photo copyright © by Kaj Halberg)
Initially, the Labrador retriever was bred as a working dog, assisting fishermen from Labrador to haul nets, fetch ropes, and retrieve fish from the chilly North Atlantic. Today, it is a popular family dog. 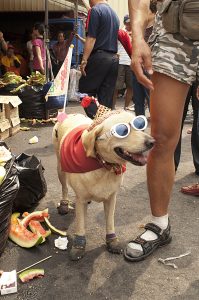 During a Taiwanese Daoist festival, dedicated to the Mother Goddess Mazu, pilgrims often walk for days, from temple to temple. This Labrador, joining his master, is well equipped for the journey. (Photo copyright © by Kaj Halberg)
The short-legged dachshund was developed to chase foxes and badgers out of their dens, for the hunter to shoot them. In America, they have also been used to chase prairie dogs out of their dens. This breed comes in three forms: smooth-coated, long-haired, and wire-haired. 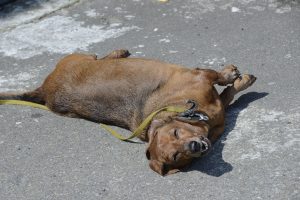 This smooth-coated dachshund is so lazy that it doesn’t even bother to raise its head to bark at me. – Taichung, Taiwan. (Photo copyright © by Kaj Halberg) 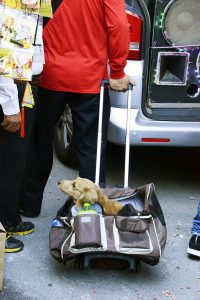 Transporting a long-haired dachshund through a dense crowd of people, gathered in front of the Daoist temple Bai Sa Wan Mazu, near Tongxiao, western Taiwan. (Photo copyright © by Kaj Halberg)

Sleeping wire-haired dachshund pup, 3 weeks old. (Photo copyright © by Kaj Halberg)
The Saint Bernard dog is a famous breed of enormous size, originating in the western part of the Alps around the Great and Little St. Bernard Passes, where it was utilized to rescue people buried in snow, or otherwise in need of help.

This dog in Guiyang, Guizhou Province, China, may have some Tibetan spaniel genes, and probably also some Pekingese, due to its very prominent lower jaw. (Photo copyright © by Kaj Halberg)
The Doberman pinscher originated in Germany around 1890. If well trained, they can become loving family dogs, but on the other hand, there has been a number of incidents, in which Dobermans were mauling people.

Doberman pinschers, about one year old, Mysore, Karnataka, India. (Photo copyright © by Kaj Halberg)
The huge Tibetan mastiff was developed by Tibetan herders to protect their sheep and goats from being attacked by various predators, such as snow leopards and wolves.

Tibetan mastiff, guarding outside a road-side restaurant, Trisuli Valley, central Nepal. (Photo copyright © by Kaj Halberg)
The common stray dogs of Taiwan, called Taiwan dogs, or sometimes Takasago dogs, are a result of the indigenous Formosan hunting dogs interbreeding with imported dog types. Taiwan dogs are usually black or brown, or a mixture of the two.

During Chinese New Year, a red scarf has been tied around the neck of this c. 12-week-old Taiwan dog. A red envelope, on which is written ‘wang-wang’, is fastened to it. The red colour of the envelope, as well as the text, denotes well-wishing. At the same time, wang-wang is an imitation of a dog’s barking. – Taichung, Taiwan. (Photo copyright © by Kaj Halberg)
The Samoyed originated among nomadic Samoyed people in Siberia, to pull sledges and to help herding reindeer. Today, it is a very popular family dog in the West. 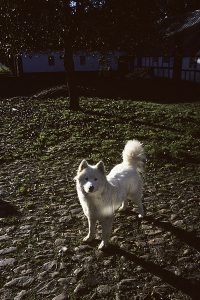 Samoyed, Denmark. (Photo copyright © by Kaj Halberg)
The Chinese pug is known to be a sociable and loving companion dog. As its name implies, it was developed in China, but it arrived in Europe as early as the 16th Century. 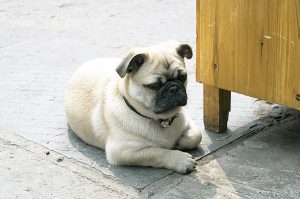 Chinese pug, Guiyang, Guizhou Province, China. (Photo copyright © by Kaj Halberg)
In many places, dogs are treated cruelly. This poor dog was chained to a dog house, consisting of corrugated iron sheets, at the road north of Palaiochora, southern Crete. One must hope that the owner does not chain the dog to this house in the summer time, when the temperature inside must be red-hot.

When I knelt down and tried to call the dog, it was utterly delighted and came creeping along the ground, its tail between the legs. Obviously, it enjoyed being scratched on the head, but when my companion joined us, it immediately got scared and ran as far away, as the chain permitted.

(Photo copyright © by Kaj Halberg)
In many cities around the world, it is now the law that you must clean up after your dog. For this purpose, plastic bags are often provided. 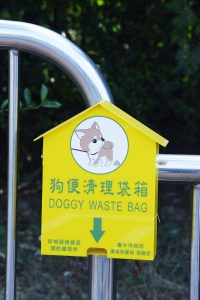