Wait for me! – Bringing home her family’s cows shortly before dusk, this girl holds on to a cow’s tail. Usually, cattle owners in the Himalaya do not let their animals graze out at night for fear of attacks from wolves or bears. – Kaza, Spiti, Himachal Pradesh, India. (Photo copyright © by Kaj Halberg)

Cow with its newly born calf, Fanø, Denmark. The gestation period of cattle is c. 283 days, i.e. roughly the same as humans. (Photo copyright © by Kaj Halberg)
Archaeological evidence indicates that cattle were first domesticated from the wild aurochs (Bos primigenius) in south-eastern Turkey, app. 10,500 years ago. Traditionally, cattle were classified as belonging to three separate species: the European taurine cattle (Bos taurus), the Asian zebu (Bos indicus), and the extinct aurochs, which lived in parts of Europe, Asia, and Africa.

Further complicating the matter is the ability of taurine cattle and zebu to interbreed – and sometimes have fertile offspring – with other closely related species, such as the yak (Bos grunniens), the gaur (Bos gaurus), and the banteng (Bos javanicus), as well as the American bison (Bos bison) and the Eurasian bison, or vicent (Bos bonasus).

Originally, cattle were utilized as food, and later people learned to appreciate their milk. As early as the 4th Century B.C., the wheel was invented in the Middle East, and the first carts were probably drawn by cattle. Today, ox carts, or bullock carts, are still seen in some Asiatic and Latin American countries, most often pulled by oxen, or bullocks – castrated bulls, which are easier to control than uncastrated bulls. At an early stage, oxen were also utilized to pull the plough, and to work on bucket chains, or pot garlands, which shovel up water from wells, leading it into irrigation canals. 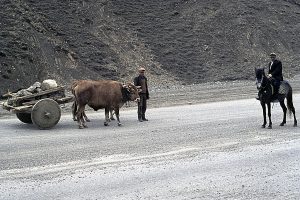 The ox cart was probably invented in the Middle East around the 4th Century B.C. This picture shows an ox-cart and a horse rider beneath the Kopdağı Geçidi Pass, eastern Turkey. (Photo copyright © by Kaj Halberg)

At an early stage, people learned to appreciate cow milk. Late in the afternoon, this woman in Jaisalmer, Rajasthan, India, is milking her zebu cow. The calf is waiting to get its share of the milk. (Photo copyright © by Kaj Halberg)
To the ancient Asian animists, the ox was a sacred animal, and it was often presented as an offering to gods or spirits. Still today, traces of this ancient practice are found in various places, including Ladakh, where horns of cows, yaks, and wild sheep are often placed as offerings on stone cairns. These horns and stones are often painted red, called Lato Marpo (‘Red Gods’), the red dye probably symbolizing blood from sacrificed cattle.

You may read about other animist practices elsewhere on this website, see Religion: Animism.

This cairn with a small yak skull was photographed in the Markha Valley, Ladakh. (Photo copyright © by Kaj Halberg)
To Hindus, the cow is still sacred, called Go Mata (’Mother Earth’). An orthodox Hindu will never kill a cow on purpose, and never eat beef. Worship of the cow arose around the 1st Century A.D., and it was regarded as representing various gods, including Brahma, the creator, Indra, the rain god, and Yama, the god of death. To many, the cow is sacred, because it gives us milk, like our mother. An orthodox Hindu once said: ”You certainly won’t kill your mother, which gives you milk.”

The cow is venerated during various Hindu festivals. One of these is the South Indian Pongal, or Sankranti, which marks the beginning of the harvest. During this festival, cows are fed with pongal (a mixture of rice, sugar, lentils and milk), after which they are washed and decorated with turmeric powder, and their horns and hooves are painted in vivid colours.

The powerful Hindu-Buddhist Khmer Empire ruled in what is today Cambodia, between the 9th and the 15th Centuries A.D. The Khmer left a superb legacy in the form of the Angkor Ruins. This relief in the Bayon, Angkor Thom, depicts an army on the march, with a cart, pulled by a zebu ox. (Photo copyright © by Kaj Halberg)

This huge sculpture of Nandi was carved from a single block of granite in 1659. – Chamundi Hill, Mysore, Karnataka, India. (Photo copyright © by Kaj Halberg)
To Vaishnavites, followers of Hindu god Vishnu, the Muktinath Temple in Jhong River Valley, Mustang, central Nepal, is a most sacred site. In the ancient Hindu epic Mahabharata, this place is called Salagrama, named after the fossilized ammonites (saligram in Hindi) – a group of extinct squid-like animals, which are often found in the river beds of this area, embedded in rocks. The spiral form of these ammonites causes Vaishnavites to regard them as sacred symbols of Vishnu’s chakra (disc). Since ancient times, Muktinath has housed a temple for Vishnu. From the barren landscape here, a sacred spring wells forth, its waters being channelled into the temple, where it is divided into 108 fountains, 105 of which are shaped like a cow’s head, the remaining three like a mythical, elephant-like creature. For devout Vaishnavites, a bath in these sacred waters will cause mukti (salvation) after death.

105 of the 108 fountains at the Muktinath Temple are shaped like a cow’s head. (Photo copyright © by Kaj Halberg) 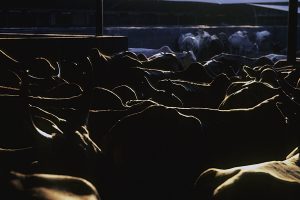 Dairy cows, grazing on the extensive meadows of the Alps, are often adorned with bells, making it easy for the owner to find them at milking times. – Säntis, Sankt Gallen, Switzerland. (Photo copyright © by Kaj Halberg)

Highland cattle originated in Scotland, first mentioned in the 6th century A.D. They have rather long horns and a long coat, which is mostly reddish, but may also be black, yellow, or white. This type of cattle has become very popular in many parts of the world, as they can be outdoors year-round. – This picture is from Bornholm, Denmark. (Photo copyright © by Kaj Halberg)

The Ankole cattle is an African breed of cattle, characterized by their huge horns. – Mubende, Uganda. (Photo copyright © by Kaj Halberg)

During a music festival in the village of Prägraten, Virgental, Tyrol, Austria, this orchestra passed by a field with grazing cattle, which were initially seized by panic (top). Their curiosity, however, soon overcame their fear. (Photos copyright © by Kaj Halberg)
A specialized utilization of cattle is bull fighting. The first recorded bullfight may be the Epic of Gilgamesh, in which Gilgamesh and Enkidu fought and killed the Bull of Heaven: “The bull seemed indestructible, for hours they fought, till Gilgamesh, dancing in front of the bull, lured it with his tunic and bright weapons, and Enkidu thrust his sword deep into the bull’s neck, and killed it.” (Source: T. Ziolkowski, 2011. Gilgamesh among us: Modern Encounters with the Ancient Epic. Cornell University Press)

Bull fighting, Sevilla, Andalusia, Spain. (Photo copyright © by Kaj Halberg)
Zebu cattle originated in Asia and is today a very common sight in India, Pakistan, and Myanmar. It is also quite popular in other tropical regions of the world, as it is more resistant to disease than European cattle. It is characterized by a hump on its shoulder and a large dewlap. Most zebus are white, but darker forms are sometimes seen. 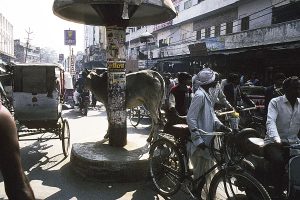 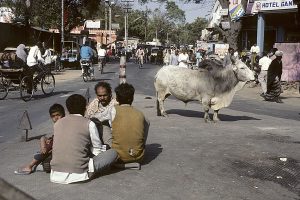 After completing their working duties, Indian cows are often released, roaming around in city streets and elsewhere. Maybe this zebu in Varanasi, Uttar Pradesh, is considering to become a policeman, as it occupies the culvert, on which a policeman will usually direct the traffic (top). – For a number of years, this short-legged zebu bull constituted a part of the street scene in Jaipur, Rajasthan (bottom). (Photos copyright © by Kaj Halberg)

Still today, ploughing with oxen, or bullocks (castrated bulls), takes place in many parts of Asia. This man near Pre Rup, western Cambodia, is ploughing his paddy field with the help of zebu oxen. (Photo copyright © by Kaj Halberg) 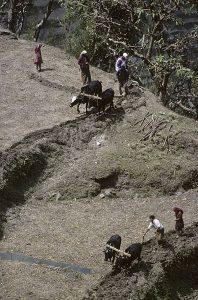 In many parts of the Himalaya, ploughing the narrow, terraced fields is done with the help of small, agile oxen. This picture is from the Modi Khola Valley, Annapurna, central Nepal. (Photo copyright © by Kaj Halberg)

Today, bucket chains, or pot garlands, which shovel up water from wells, are a rare sight. This one, using clay pots, and driven by zebu oxen, was seen near Mount Abu, Rajasthan, India, in 1991. (Photo copyright © by Kaj Halberg)

Zebu cattle, swimming across the Ayeyarwadi (Irrawaddy) River, Bagan, Myanmar. (Photo copyright © by Kaj Halberg)
In former times, the wild banteng (Bos javanicus), also called tembadau, was distributed from eastern India, across Southeast Asia to the islands of Borneo and Java. This species has declined drastically, and today the total population of wild banteng may be as low as 5,000, its most important strongholds being on Java. Banteng was domesticated at an early stage, and today the total population of domesticated animals is around 1.5 million, found mainly on Java and Bali. It has also been introduced to northern Australia, where feral populations constitute a threat to the local ecology.

Domesticated banteng are a common sight on Bali. (Photo copyright © by Kaj Halberg)

On the island of Madura, and elsewhere in Indonesia, banteng bulls are utilized for racing, pulling a kind of wooden sledge, on which the coach is standing. (Photos copyright © by Kaj Halberg)
The yak (Bos grunniens) is a high-altitude species, which used to roam the Central Asian highlands in large numbers. It is adapted to a life in this harsh environment, having a luxurious fur, which keeps it warm in temperatures below -30o Centigrade. (A legend regarding this thick fur is related elsewhere on this website, see Animals: Why the water buffalo has so little hair.)

The yak was domesticated by nomadic tribes as early as c. 5000 B.C. Today, the population of domesticated yak is estimated at 14 million, the vast majority found in Chinese territories. The population of wild yak may be fewer than 15,000, and though it is legally protected, illegal hunting still takes place and may threaten it with extinction.

The scientific name of the yak, Bos grunniens, means ‘the grunting ox’ in Latin – a most descriptive name, as it grunts incessantly.

The nak yields excellent milk. In this picture, one is being milked in the Upper Ghunsa Valley, eastern Nepal. (Photo copyright © by Kaj Halberg)

This yak skull has been placed as an offering near mani stones (slabs with carved Buddhist mantras) on the kora, or pilgrim route, around Tashilhunpo Monastery, Shigatse, Tibet. Note that mantras have also been carved into the skull. (Photo copyright © by Kaj Halberg)
A dzopkio is a crossbreed between a yak and a cow. At lower altitudes in the Himalaya, it replaces the yak for transportation, as yaks do not thrive below 3,000 metres. After a long day’s work, dzopkios and yaks are often released in the forest to graze. Whatever they can find of wild foods is supplied with hay, bought by the owner from local farmers.

Searching for food, this dzopkio is walking past a mani-stone with carved Buddhist mantras, near the village of Ghat, Khumbu, Nepal. The plant to the left is Sikkim spurge (Euphorbia sikkimensis), which is avoided by grazing animals, as it is toxic. (Photo copyright © by Kaj Halberg)
(Uploaded September 2017)
(Revised December 2018)
Text & photographs © Kaj Halberg, 2015. All rights reserved. Contact: respectnature108@gmail.com